In this three-part series, we list our favourite moments from the big three companies at E3s of years past.

Nintendo has a long history of surprising and delighting fans at E3, and our favourite Nintendo E3 history is essentially a collection of these moments. 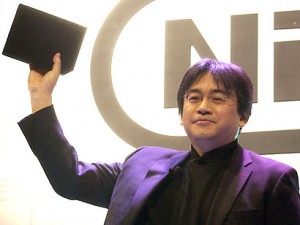 That time Mr. Iwata asked if we wanted a gaming revolution… but didn’t show us.

Nintendo has always been great at making us yearn for more and more. Back in 2005, Nintendo CEO Satoru Iwata stood up in front of the world and said, “You say you want a Revolution? Well, we’ve got one!” as he proceeded to pull the next generation of gaming OUT OF HIS SUIT JACKET. This in itself was insane, and everyone want a bit crazy for the console. Of course, we wouldn’t catch a glimpse of the actual revolution (neither the motion controller nor the Wii name was revealed until early in 2006) until just seven months before the console’s release at the tail end of 2006. It ended up being one of the most prolific controllers in gaming history, not to mention much more comfortable than it looked, so this is easily one of our favourite moments in Nintendo’s E3 history.

This was a surprise no one saw coming, and while it didn’t end up being a commercial hit, we still love the Game Boy Micro. Named after is diminutive stature, this handheld was for those who just wanted to reconnect with the occasional handheld game on the bus or at the airport, but didn’t want to lug around a Nintendo DS. It didn’t make a lot of sense in the grand plan, though Nintendo didn’t see fit to officially can the product until a full three years after its 2005 release. Of course, a console like this would never work in this age of smartphones that play near console-quality titles, but hey, it was still a better redesign than the PSPgo.

All those times Mr. Miyamoto showed up as Link.

Some of our fondest memories of E3 are when Mr. Shigeru Miyamoto shows up on stage at a press conference donning a sword and shield and prancing around as if he’s Link. Okay, he doesn’t prance, but he does strike a wicked pose. More importantly is that his arrival with said weapons indicates that there’s some forthcoming Zelda news, and that is never a bad thing. We finally got to see him do this live at the unveiling of The Legend of Zelda: Skyward Sword in 2010, and we were also among the first people to play that game outside of Nintendo.

That time the Nintendo 64 became a thing.

It was quite a while ago–1995 was twenty years ago, if you can believe that–that Nintendo unveiled what, at the time, was called the Ultra 64. Going on to be known as the Nintendo 64, the company also showed off the first foray into three-dimensional Mario games at that point. The analog stick was also the first of its kind on a console, and it was used to show how various degrees of the analog stick would cause Mario to walk, jog, and run, and the crowd absolutely ate it all up. That’s next-generation right there, folks.

What are your favourite E3 moments? Let us know on Twitter and Facebook, or in the comments below!