NOTE: Spoilers from throughout the second season of Brooklyn Nine-Nine are present in this review

Brooklyn Nine-Nine continued its rise to becoming one of television’s strongest comedies in its well-realized second season. It didn’t achieve the incredible highs of something like Parks and Recreation, but Brooklyn Nine-Nine is still one of the best comedy tentpoles in the FOX lineup, even when stacked against long-running veteran animated sitcoms like The Simpsons and Family Guy.

So, what went down in Season Two? Well, Peralta’s undercover assignment inevitably gets cut pretty short, but there’s no time to rest easy! A new deputy commissioner is in town, Madeline Wuntch, played in a recurring role by Kyra Sedgewick, who happens to be Captain Holt’s bitter nemesis! Meanwhile, Gina and Boyle continue their ill-advised affair, which leads to a pretty unexpected result, and Diaz even manages to fall in love… With Holt’s inept, but well-meaning nephew. A lot happened in Season Two, and most of it was pretty damn funny.

First, the big strengths of the season, which definitely included its guest stars. Wuntch was a brilliant schemer of a character, and Kyra Sedgewick and Andre Braugher were guaranteed to have the audience in stitches whenever they shared the screen with their barbed jabs at one another. Likewise, Eva Longoria proved to be an almost unrealistically idealistic love interest for Peralta in attorney, Sophia, which is why it seemed inevitable that they’d eventually break up within the season, especially with Peralta still pining for Santiago in his heart of hearts. At the very least though, this did lead to Chris Parnell getting a hilarious turn as Sophia’s coked-out boss, whom Peralta has to arrest, and subsequently deal with. Even Garrett Dillahunt as a legendary detective that tries to ask out Santiago, and Bradley Whitford as Peralta’s estranged father, helped to elevate some of the material in the sadly weaker episodes that they were stuck in. There’s more, but I’d be here all day if I went on about all of the great guest roles that Season Two offered!

Another big plus this season were the storylines, most of which turned out very well. Not only were they very funny, but they also proved to be incredibly surprising in some great ways! Just about everyone probably expected Diaz and Marcus to break up for one reason or another, but miraculously, they were still together by season’s end. Likewise, everyone no doubt expected Gina and Boyle to fall in love, but they didn’t, and even ended up breaking up. More surprising is that their botched getaway attempt beforehand leads to Boyle’s single father and Gina’s single mother meeting, falling in love, and even getting married within the season, with the Boyle-Linetti wedding episode definitely being one of the season’s best!

Finally, more than anything else, Season Two of Brooklyn Nine-Nine was almost consistently hilarious. Even the season’s weakest episodes had at least a handful of highly memorable gags, particularly when Andy Samberg and Andre Braugher were really allowed to let loose, with this original duo of foils still remaining one of the show’s best draws. That’s not to say that the other actors were slacking though. Every character got a very cool chance to shine this season, having at least a couple of very strong storylines and running gags to call their own, even if some of the running gags from Season One, such as Santiago’s imaginary sex tape, felt like they came up less often in Season Two.

Next however, comes the small handful of drawbacks this season. First, as with even most of the best comedies on TV right now, which Brooklyn Nine-Nine definitely stands with at this point, some episodes this season were duds. As much as episodes like “Chocolate Milk”, “Jake and Sophia”, “The Pontiac Bandit Returns”, “Boyle-Linetti Wedding”, and of course, the awesome season finale, “Johnny and Dora” were all especially outstanding winners, we did occasionally have to slog through weaker episodes, which included “Lockdown”, “Captain Peralta” and “Det. Dave Majors.” Whether these episodes just had plots that didn’t work, or gags that didn’t flow very well, they occasionally dinged the season here and there. Still, these episodes were quite few and far between in Season Two, and the weaker episodes are definitely outnumbered by the episodes that ranged from good to excellent! 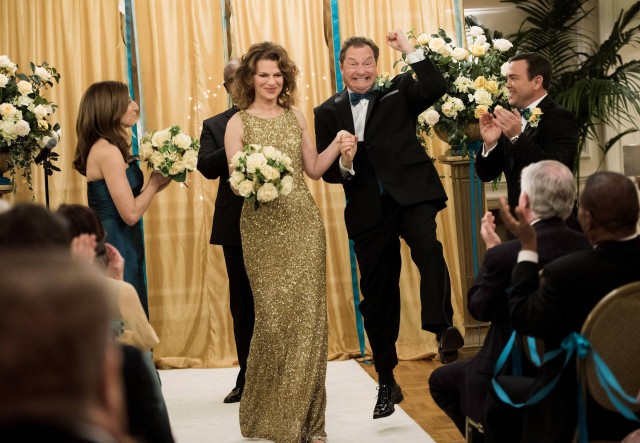 The second big drawback of Season Two was the tedious Peralta/Santiago romantic tension. For most of the season, it just got in the way, and made the show too serious when it didn’t have to be. As much as it makes sense that Peralta teases Santiago because he actually has feelings for her, in a twisted, schoolboy kind of way, the show just couldn’t make their situation work well. It wasn’t until the season finale that these two came together in any believable way, and mercifully, finally just decided to get together, as we all knew they would.

Again, I can’t stress enough how perfectly Season Two ended as well. Not only did Peralta and Santiago finally get together, but Holt and Gina appeared to be walking out of the Nine-Nine together, after Wuntch’s scheming seems to have won out against Holt, in a rather surprising way. Yes, Holt and Gina are no doubt going to go back to the precinct again, with the showrunners stressing continually that neither Andre Braugher nor Chelsea Peretti have left the show (especially considering that both Holt and Gina are fan-favourite characters), but the idea of seeing them somewhere else at the start of Season Three, where they’re still connected, but separate from the precinct, should lead to all sorts of interesting new joke and story opportunities. Likewise, the season ending as the doors open to reveal a mysterious (and so far undetermined) new captain felt like the best kind of tease, which fans can debate continually before Season Three starts airing in the Fall.

Brooklyn Nine-Nine’s strong second season continued to build on the great foundation of Season One, resulting in an even better season with a handful of let-downs, but mostly non-stop laughs and surprises. The show is ultimately going stronger than ever as it prepares to move into Season Three, which will hopefully continue to deliver the same narrative courage and inspired humour that we’ve enjoyed throughout much of this past season.