NOTE: Spoilers from throughout the debut season of The Flash are present in this review

The Flash is one of the biggest and most beloved DC superheroes of the lot. A primetime live-action drama starring this character may seem like an easy recipe for success, but in practice, it’s a far more dangerous task than one may think! The Flash has one of the weirdest canons in comic book history, with time travel, alternate dimensions, psychic gorilla overlords, magic treadmills, future museums, and bands of mischievous, gimmicky criminals all playing heavily into the thoroughly ridiculous Flash lore, among many other bizarre things.

What’s most shocking about The Flash however isn’t even that it exists, nor that it shares a universe with the far more gritty and grounded Arrow, a show it was frequently happy to cross over with throughout Season One. It’s that it proudly incorporates all of these off-the-wall comic book elements and more from its very first season, and speeds out of the gate with them to become what is arguably television’s best primetime comic book drama right now! Yes, that includes The Walking Dead, which, as our review of its previous season stated, has run into a few creative stumbles lately.

Following Barry Allen’s introduction as a nosy forensic investigator during the second season of Arrow, which ended with him getting caught in a Particle Accelerator explosion and struck by lightning, Barry has awoken from a nine-month coma (symbolism!), and discovers that he’s developed super-speed. Awakening in the care of S.T.A.R. Labs, the disgraced scientific firm that was behind the botched Particle Accelerator experiment (and an organization that DC fans should be well familiar with), most of the first season then appears to unfold with Barry capturing other super-powered folks, as he gets a handle on his incredible new abilities, managing being a hero with his personal life.

On paper, The Flash sounds like it hits a lot of familiar beats as far as these comic book dramas go. Even though it’s expertly refined, and beautifully presented out of the gate, The Flash may appear to be more of what superhero naysayers are already sick of… But it’s not long before the show’s incredibly unique identity begins to forge itself.

You see, with Marvel finding all sorts of success in, you know, actually embracing comic book weirdness in its live-action projects on both the big screen and the small screen over the past several years, DC finally decided to take a page out of that playbook. This results in The Flash finally being a DC live-action show that goes for broke, and fully embraces its insane legacy throughout DC lore. Because DC has finally presented a show with the guts to embrace its roots, The Flash is tons of fun to watch, and feels constantly unpredictable and interesting. It’s not quite like anything else, since the series so effectively brings what makes The Flash appealing to the table from Day One, not even shying away from the elements of the character that are more strange and bizarre. 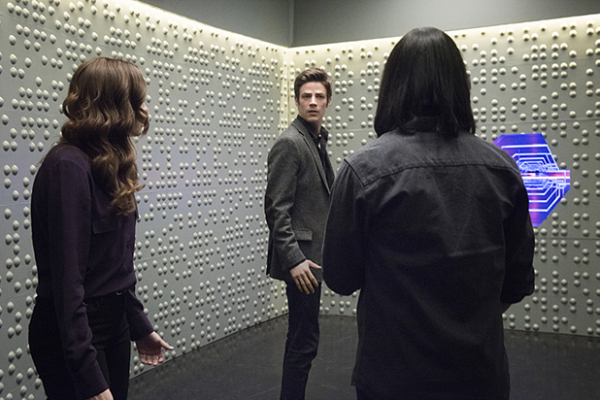 Even when the show gets colourful and weird, as it very often did though, The Flash still presented an outstanding cast, one that felt grounded and believable. The cast reacting to their increasingly weird circumstances was something that made this series really work, especially as a billed Arrow spin-off, with the Particle Accelerator being sort of an opening of Pandora’s Box for the DC Television Universe. Even at the show’s weirdest, the leads never stopped feeling like ordinary people in an extraordinary world, which made for outstanding entertainment. Even Barry himself has real problems, having lost his mother to an event he can’t explain as a young boy, and being adopted by Central City detective, Joe West after his real father is put in jail for it. He’s also incessantly picked on, even in his adult life, due to his scientific pursuits clashing with his belief in the impossible, making Barry something of a likable nerd. Despite this however, Barry has virtually no friends, outside of his adoptive sister, Iris, is mostly clueless when it comes to dating, and falls pretty far into his Flash identity once he discovers it, even when it gets dangerous, and Barry inevitably ends up in over his head, surprisingly frequently in fact!

If anything tied the excellent debut season of The Flash together though, it was the fantastic mystery surrounding Barry’s Flash mentor, Harrison Wells, who is mostly an original character invented for the show. I say mostly, because just after midway through the season, Wells is revealed to be Flash arch-nemesis, Eobard Thawne (a.k.a. DC villain, Professor Zoom) in disguise, who is actually training Barry so that he can power the Particle Accelerator to send Wells back to his future timeline. Even from the pilot, we know something isn’t right with Wells. The show immediately establishes that he’s from the future, a future where The Flash has apparently died, and he has a dark secret, best displayed in the very second episode, when Wells flat-out stabs business tycoon, Simon Stagg to death. The show gradually trickles out more and more information about who Wells really is with each episode, particularly when he’s confirmed to be another speedster, and the very same Reverse Flash that Barry finds himself helpless to stop, or even keep up with! The fact that his apparent ancestor, Eddie Thawne is around, who also happens to be Iris’ boyfriend and Detective West’s police partner, further benefits the mystery, especially as the season approaches a climax, and Eddie must embrace a surprising destiny to stop the menace of Reverse Flash.

Reverse Flash was far and away one of the best villains of the season, but he wasn’t the only winning antagonist. Wentworth Miller proved to be another highlight foe, as another major Flash villain, Captain Cold, a freeze gun-wielding thief and killer who oh-so-loves being evil in Central City. The fact that Miller was re-teamed with his Prison Break co-star, Dominic Purcell as Cold’s partner-in-crime, Heat Wave was all the better, with these two forming the basis for the organization of Flash villains called The Rogues, alongside Cold’s sister, Lisa, a.k.a. DC villainess, Golden Glider. The show even eventually built up how The Rogues sort of have a ‘gentlemans’ agreement’ with The Flash in DC lore, where Flash won’t actually take out any of them, and The Rogues in turn won’t reveal The Flash’s identity as Barry Allen, which they’re well aware of, nor will they kill anyone. The Rogues were a big highlight in Season One, and I do hope that they can look forward to an even larger role in Season Two, especially with Miller and Purcell reprising their roles for upcoming ensemble spin-off, Legends of Tomorrow.

With that said however, one of the annoying drawbacks in The Flash’s first season is the fact that most of its villains were underwhelming. Even big Flash baddies like Weather Wizard (BOTH of them!), ended up disappointingly bland and unmemorable in their debut here. There were some exceptions, like Mark Hamill’s brilliant reprising of his fan-favourite DC role as Flash villain, Trickster, within one of the best episodes all season, but too many of the metahumans that Barry and co. rounded up felt like cardboard villains-of-the-week, and that’s a shame.

Likewise, while we know that Barry ends up marrying Iris in DC Comics, the romantic tension between these two was often tedious at best. It didn’t go anywhere interesting until later in the season, when Wells tells Eddie that he won’t ultimately marry Iris, and Iris learns that Barry is The Flash, and before that, these two constantly fighting felt like cheap ploys at drama. Barry even temporarily dated the future wife of his Flash successor, Wally West, that being Linda Park, but this felt like a pretty undercooked plot arc, and started to leave Iris in danger of becoming self-centered and unlikable. Honestly, Iris spent too often feeling like a benchwarmer character, similar to Laurel over on Arrow, before she finally became Black Canary this season.

One last small gripe is that the show’s introduction of another DC hero, Firestorm, worked to mixed effect. The idea behind exploring how two men merge into a nuclear-powered, unstable hero that has to share two minds, was done well. With that said however, Firestorm’s arcs often intruded on episodes that had bigger things to focus on, much like the forced flashbacks of Arrow this season, and Firestorm’s presence in general just felt like a way to start laying the foundation for Legends of Tomorrow. At least Ray Palmer, another Legends of Tomorrow lead-in, was put to decent use on Arrow this season!

That said however, the effects of Firestorm were awesome. In fact, The Flash constantly defied its TV budget in general with some really outstanding special effects work! Every so often you’d see a bit of dodgy CGI or something, but beyond that, The Flash did incredibly well at realizing its super-powered villains. Barry himself was also well-realized as The Flash, who is no longer simply a blur, but has lots of cool details, like a trail of lightning for example.

Best of all is that the many larger-than-life plot arcs of The Flash came together perfectly in its completely awesome season finale! Eddie sacrifices his own life to eliminate Wells from history, one of Barry’s S.T.A.R. Labs buddies is revealed to be a metahuman the whole time, Barry goes back to the past, and must struggle with his inability to change it, and this all culminates in all of Central City about to be engulfed in a giant singularity, with the season ending as Barry prepares to speed to the rescue!

Words cannot describe how amazing The Flash turned out in its first season! Its effects, its cast, its mysteries, its action, its result… It was all damn near flawless! The Flash ran circles around the meandering, underwhelming third season of Arrow this season, creating a fun, emotional, action-packed and highly satisfying romp through the best that DC Comics has to offer in primetime. 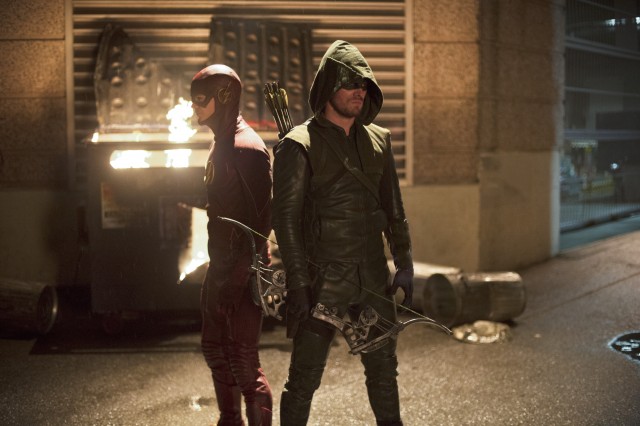 This is not only a show well worthy of the proud, albeit bizarre legacy of the Fastest Man Alive, but is also a textbook example of how to make a highly entertaining, completely kick-ass comic book drama. While DC’s other shows, Arrow included, currently struggle to find their place in the modern primetime television ecosystem, The Flash is confidently leaving all of them in the dust!

The Flash [2014]: Season One Review
The Flash burst out of the gate strong, and only got better with almost every episode, as it proudly embraced even the weirdest elements of Flash lore. In its stellar first season, this show is a how-to guide of how to make your comic book drama excel!
THE GOOD STUFF
THE NOT-SO-GOOD STUFF
2015-05-28
92%Overall Score
Reader Rating: (0 Votes)
0%