NOTE: Be advised that this article spoils a major character death from Gotham’s Season One finale

It looks like another upcoming Batman villain will be playing a large part in the upcoming second season of Gotham. Actor, Nicholas D’Agosto, who portrayed doomed Gotham City attorney, Harvey Dent during the show’s first season, has taken to Twitter to confirm that he has been upgraded to series regular for Season Two. This means that Dent will feature in just about every episode on the series for next season, or at least that’s the plan. 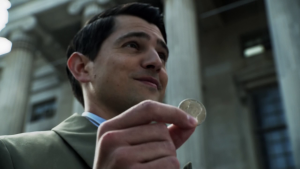 This echoes previous plans by Gotham’s showrunners, who spoke about D’Agosto’s casting as Dent last year, saying that the plan was to make him a one-off character in Season One, before Dent expanded to a larger part in a hopeful, and now-confirmed, Season Two. Despite only having one initial appearance planned however, D’Agosto’s Dent ended up showing up in a handful of Gotham episodes during Season One, not just the one he was planned for.

Dent’s darker personality, the vicious, violent and savage alter-ego that will one day manifest after his turn to becoming duality-obsessed Batman villain, Two-Face, was glimpsed briefly during Season One. Considering that D’Agosto is a series regular now, we’re bound to be seeing more of this on the show soon, with Gotham potentially going the route of Batman: The Animated Series, and having Dent struggle with his darker alternate personality, even before his fateful scarring.

It seems then that the future Two-Face will now be adopting the same space as Robin Lord Taylor’s Penguin and Cory Michael Smith’s Riddler, with both Taylor and Smith also returning for Season Two in large parts. It’s obviously unknown whether D’Agosto will actually become Two-Face next season at this point though, or at all at any point during the series, especially since this would firmly fly in the face of Batman canon. Then again, Gotham drastically went against Batman canon already in its first season finale, by killing off Sal Maroni, the man who normally scars Harvey Dent in the courtroom acid attack that turns him into Two-Face. Considering this, it’s probable that Dent, if he is to become Two-Face on Gotham, will currently go about it a different way.

Nicholas D’Agosto now joins Morena Baccarin, who plays Leslie Thompkins on Gotham, in the upgrade from recurring guest star in Season One to series regular in Season Two. They’ll be joining Ben McKenzie (Jim Gordon), Donal Logue (Harvey Bullock), David Mazouz (Bruce Wayne), Sean Pertwee (Alfred Pennyworth), Robin Lord Taylor (Oswald “Penguin” Cobblepot), Camren Bicondova (Selina “Cat” Kyle), and Cory Michael Smith (Edward Nygma) in regular roles for Season Two at this point. The showrunners have also confirmed that an unidentified male villain and unidentified female villain, both young, attractive schemers, are currently in casting, with both possibly being original villains, made up for Season Two. Established Batman foes, Mr. Freeze, Hugo Strange, Clayface, Hush and Mad Hatter are also confirmed to be making debut appearances at some point in Season Two, despite Hugo Strange originally being planned for Season One, before being bumped to next season in the end.

Gotham has wrapped its first season (which we found satisfactory, if imperfect, in our recent overall review of it), which will soon come to Netflix, under an exclusive deal made by FOX and DC Entertainment with the streaming service. Season Two will begin airing on FOX this Fall, or CTV for us Canadians, in the returning timeslot of 8:00-9:00 P.M. on Monday’s. This will prove to be stiff competition starting in November however, with CBS airing their competing DC Comics-inspired primetime drama series, Supergirl in the exact same timeslot, from that point.

Keep swooping to Eggplante for all news and updates on Gotham.