With Sony revealing their six-pack of free PlayStation Plus games for June yesterday, Microsoft has now chimed in on the trio of freebies that Xbox Live Gold members can redeem for free next month.

The new Games with Gold selection will go live this coming Monday, June 1st. Thus, if you have yet to redeem CastleStorm: Definitive Edition on Xbox One, or F1 2013 on Xbox 360, you have until then to do so. Afterward, these games will go back to their original paid pricing for Xbox Live Gold members. Curiously, CastleStorm: Definitive Edition will be the game that exits Games with Gold for Xbox One in June, not Pool Nation FX, which has been free for Xbox Live Gold members since April, and will continue to be free for yet another month for Xbox Live Gold subscribers in June.

Without further ado then, let’s see which Games with Gold offerings are on deck for June:

The lone free game for Xbox One next month is Massive Chalice. This Kickstarter-funded turn-based strategy game was made by Double Fine Productions, and has been in beta and Early Access on Steam for PC, Mac and Linux, since last year. It will officially release for both Windows PC’s and Xbox One for the first time, on June 1st. 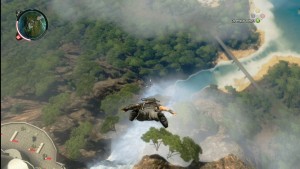 Next, for the first half of the month, between June 1st and June 15th, Xbox 360 owners with Xbox Live Gold subscriptions will be able to redeem Just Cause 2. This sandbox action-adventure game places players in an enormous open-world island setting, taking place four years after the events of the original Just Cause, and placing players in control of returning protagonist, Rico Rodriguez. Rico must dethrone the dictator of the fictional island, packing a sweet grappling hook, and a hefty arsenal. This free reward should be a great way to gear up for this year’s upcoming release of Just Cause 3 on next-gen hardware as well, particularly since Just Cause 2 was well-reviewed, and a big seller! Just Cause 2 is also available on PC and PlayStation 3.

For the second half of the month, between June 16th and June 30th, the Xbox 360’s free Games with Gold reward will be Thief. This reboot of the highly celebrated stealth game series puts players in control of a new incarnation of master thief, Garrett, as he plunders his way through a steampunk city on the brink of chaos. Thief received mixed reviews, though was largely praised for its stealth gameplay, even if its brevity and storyline were also points of contention. Thief is also available for PC, Xbox One, PlayStation 4, and PlayStation 3.

All in all, this is a more appealing month for Games with Gold than it is for PlayStation Plus. Massive Chalice should prove to be a fun Summer surprise, hopefully boasting the same incredible charm and appeal that Double Fine is known for. It’s Xbox 360 owners that are really getting spoiled though, with two full-blown retail freebies, even if both were previously offered as free PlayStation Plus rewards on PlayStation 3, with Thief’s free turn being quite recent on Sony’s last-gen console. Still, if you missed their PlayStation Plus turns, or are simply a strict Xbox gamer, Just Cause 2 in particular is an outstanding freebie, especially as a way to get geared up for Just Cause 3 later this year.