NOTE: Full spoilers for the first season finale of iZombie are present in this review

iZombie wrapped up its debut season this week, and as expected, its first season finale didn’t disappoint! “Blaine’s World” delivered a superb mix of just enough wrap-up to feel like the season went somewhere great, while also leaving plenty of doors open for the confirmed Season Two this Fall.

As Liv and Ravi investigate the dead teen who was killed off at the end of last week’s episode, Liv munches on the girl’s brain, and quickly gains a snarky attitude. Considering that this season finale went into some darker territory though, Liv’s latest personality switch wasn’t acknowledged all that much. There was far too much story to keep audiences’ attention, after all, even if some of Liv’s lines this episode did supplement everything with some decent humour. 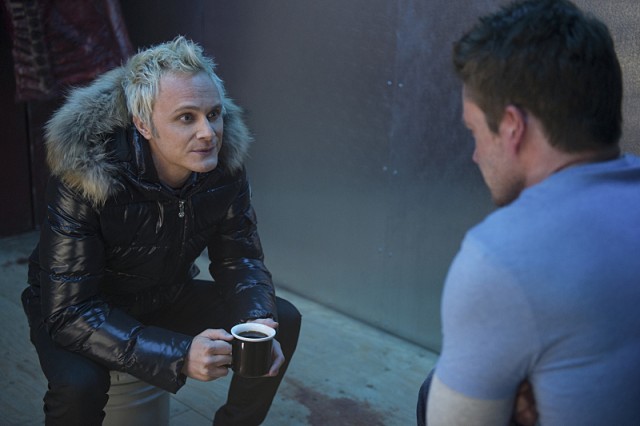 Even if the Max Rager enforcer was believed to be the final culprit of last week’s murders, the killing of the other teen confirms that another killer is still out there. All the while however, Liv and Ravi don’t seem to notice that Major has gone missing, with Blaine holding him hostage in Meat Cute’s freezer, slowly torturing him by keeping it just cold enough to avoid killing him, so that Major will spill where the stolen brains are. Major refuses to talk, and is thus left to keep freezing.

Instead of catching on, Liv continues to push the investigation of Max Rager, with more evidence surfacing that Max Rager is pioneering another extra-powerful energy drink, deliberately burying the evidence that the drink they already have is contributing to the creation of zombies, along with violent outbursts in some of its users. It’s revealed this episode that Max Rager wants to pioneer the Super Max drink to eliminate exhaustion for all humankind, permanently, thus increasing productivity in all sectors of the world, and raking in the profits in turn. It’s a ridiculous, yet oddly brilliant plan, and a perfect fit for the tone and style of iZombie, even though this basically amounts to a tease for Season Two, not anything truly realized in this season finale proper.

After some more poking the Max Rager bear, Ravi synthesizes a cure for zombieism that appears to work perfectly with the last of the tainted Utopium, as Liv debates using it to end her zombie lifestyle. Ravi cautions however that new side effects could always result with a human test subject, so Liv simply hangs on to it for the time being.

This comes just in time for Liv to get a call from Major’s phone, where Blaine reveals that he’s got Major captive. Blaine proposes an exchange, having Liv return the stolen brains, in exchange for Major’s safe return. Liv meets to do the deal, but, surprise, Blaine double-crosses her, and hands her off a decoy. D’oh!

I don’t see why Blaine would bother tricking Liv in this manner, but I guess the point is moot, since Major ends up escaping the freezer, and goes to his car to grab the firearms he bought. What results from there is by far one of the most shamelessly badass moments of the entire season, as Major simply decides to go all Rambo on Meat Cute! Blasting away at the zombies, Major gives them all bullets to the brain, and after initially agreeing to the owner’s surrender, he manages to dodge a stab and throw her headfirst into a meat slicing machine. Ouch! That’s definitely one of the more squeamish deaths that iZombie has had at this point! The best was yet to come however, when Major tricks the zombie that attacked him before into running into the freezer, then he tosses his lone grenade in, and tells him to walk away from that, before the guy is blown to hell. Just… Awesome!

Oh, but tough luck, as Blaine stabs Major in the gut, and leaves him to bleed to death just as Liv arrives at Meat Cute. Liv realizes that Major will die, and, making a sudden decision, she decides to stab Blaine with the cure. This was a pretty awesome twist, and felt like a satisfying way to defeat Blaine, without actually killing him. David Anders is definitely one of the best actors on this series, second only to Rose McIver in the lead role, so it would have been very unfortunate to kill him off. Fortunately, iZombie looks like it will have Blaine ready to fight another day, especially since the prototype cure could give Blaine any number of capabilities as a result, or potentially wear off entirely by Season Two. This great cure twist will be a cool way to keep fans guessing about what Blaine’s role may be in Season Two, now that he’s apparently not a zombie anymore, and that’s fantastic. 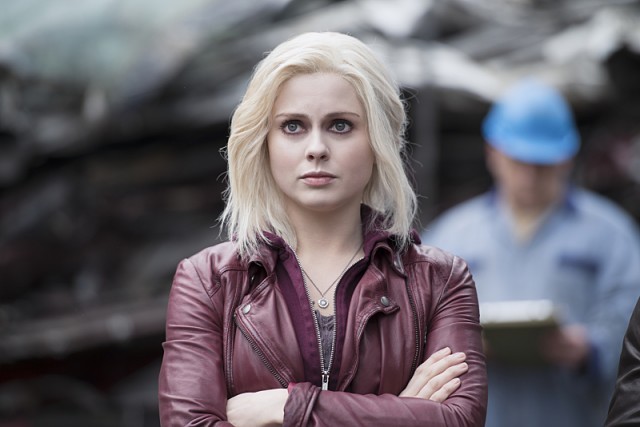 With Major taking his last breaths, after learning from Blaine that Liv is one of the very monsters he sought to destroy, Liv decides to scratch Major, and thus turn him into a zombie, before carrying him out of Meat Cute. This seemed to be inevitable, as Major was far too involved in killing zombies by this point, and it seemed like the only way he was going to come down from that vendetta is if he either died, or became a zombie himself. Still, he’s none too happy with Liv when he learns that he’s now playing for Team Z, since Liv took the choice away from him. Liv appeared to hope that the two could get a second chance at being together, but apparently, this didn’t turn out to be the case. Damn.

After coming on to the scene, Babineaux’s lieutenant sees that all of the other Meat Cute zombies have died, and stages a gas explosion, appearing to kill himself in the process. I guess it’s better than turning into a mindless zombie, now that the brain supply appears to have run out. Liv’s brother approaches the building right as it explodes as well, leaving him critically injured, as Babineaux and the other Seattle cops try to piece together what happened at the butcher shop.

The episode ends with Max Rager being bothered, but undeterred by the bad press that got out about them, continuing to keep them as key villains for Season Two, and Liv going to the hospital to meet up with her mother, and oversee her injured brother. In the final minutes of the episode, Liv’s mother tells the doctor that Liv is a blood match for her brother, when the hospital confesses to not having any O-negative blood, which is kind of b.s. if I’m being honest, since that’s literally the most common and universal blood type, and there’s no way that a hospital in a city as big as Seattle wouldn’t have any of that blood. Regardless, it does end the episode immediately after Liv refuses to donate her blood, potentially creating a bunch of drama for Season Two’s premiere, either from Liv coming out as a zombie to her family, or from Liv allowing her brother to die, after Major was so upset at her making him a zombie.

iZombie concluded its first season superbly with “Blaine’s World.” There’s lots of exciting possibilities laid out for Season Two, which is now thankfully joining the Fall lineup of CW shows with an extended episode order, and even if there was a lot of drama, the show’s unique sense of fun and humour prevailed when it was necessary. There were also lots of memorable moments to end the season with as well, particularly Major’s rampage through Meat Cute.

iZombie will be missed in the wait for Season Two, but at least it rounded off a terrific first season with a perfect hot streak!

iZombie 1.13: "Blaine's World" Review
iZombie capped off its first season with an excellent season finale, presenting tons of exciting possibilities for Season Two, and a great closer to many ongoing plot arcs throughout Season One.
THE GOOD STUFF
2015-06-11
95%Overall Score
Reader Rating: (0 Votes)
0%