NOTE: This review may contain mild spoilers for the debut season of Sense8. That said, this review is written to accommodate those who have not yet watched the series, and as such, will avoid discussion of any major plot developments.

Ever since their big breakout hit, The Matrix from 1999, the Wachowskis have had a difficult time replicating the success of their original opus. After the disaster of the Matrix sequels and video game tie-ins, the sibling duo of Andy and Lana Wachowski moved on to other properties, like the 2008 Speed Racer movie, Cloud Atlas and even this year’s Jupiter Ascending, all of which also flopped, on top of garnering negative reception from critics and moviegoers.

With the movie space not particularly friendly toward them right now, the Wachowskis appear to have implemented something of a B-plan with Sense8, a collaboration between them and Babylon 5 creator, J. Michael Straczynski, along with numerous co-directors. Sense8 is the latest debuting Netflix Original Series, founded on an original concept, and a very ambitious presentation that sees it filmed all across the world, under the supervision of many helmers, including the Wachowskis.

It seems like a very cool idea for a Netflix series, particularly given the hook that the diverse and varied ensemble cast are all mentally and emotionally linked in an adventure spanning the entire world. Unfortunately though, yet again, the Wachowskis appear to have presented an idea with a reach extending beyond its grasp, creating a promising start for a Netflix Original Series that nonetheless presents a plodding, self-important first season that is more of a chore to sit through than it should be.

The series at least kicks off with a very intriguing intro, having a mysterious woman played by Daryl Hannah (who gets strangely high billing, considering that she so rarely appears in Season One), commit suicide in an abandoned building while a man appears to astrally project to her, and mysterious pursuers close in. This is the first hint we get of an intense and rewarding sci-fi thriller that should prove to be highly engaging for viewers.

I say should, because Sense8 struggles to be that for most of its first season. Instead, it sees the Wachowskis slipping up the same way that they constantly slip up, namely in creating a sense of overly convoluted, often poorly-explained lore, and getting way too bogged down in irrelevant themes and symbolism, to the point where it absolutely murders the show’s pacing. Yes, there are many others involved in the direction and writing of Sense8, but you can tell that this is most predominantly a Wachowski siblings project. It’s got all of the hallmarks of one, and all of the mistakes of one that follows their one-hit wonder of The Matrix. 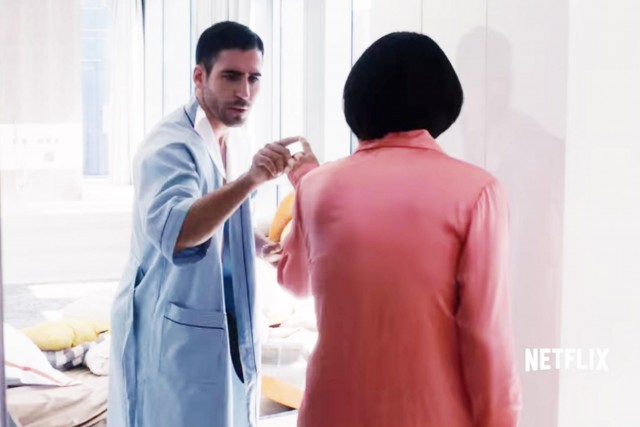 That’s very frustrating, but it also yet again proves the big drawback in the otherwise awesome Netflix model. It’s great to have lump seasons that we can watch at our leisure without wait times, yes, but that also makes any given Netflix Original Series much more of a leap of faith than it would be on a primetime TV network, in pieces. Primetime TV networks film seasons as they go, allowing them to potentially tweak scripts and do re-shoots during hiatus periods, according to ratings and audience feedback. Netflix shows however dump an entire season onto the service at once, which eliminates the advantage of audience feedback, meaning that if there is a fundamental problem with the season, it tends to drag down the entire season, not just a handful of episodes. Sense8, like BoJack Horseman or Marco Polo, seems like a show that would have benefited from audience feedback, which it can’t take into account now, unless there is to be a Season Two. Again, it’s very frustrating, since the show has such a great concept behind it, but it just gets so lost in itself, ultimately feeling like a meandering mess until its climax, and even that has a strangely vague, unsatisfying ending.

Anyway, putting all that aside, Sense8’s ensemble cast is part of a ‘Sensate Cluser’, meaning that they can randomly perceive the sensory experiences of the seven others in their cluster of eight, despite being spread across the world. When the cluster gets enough of a handle on their shared senses, they can also temporarily take control of each other, allowing them to pool their skills when the situation calls for it, namely in eluding a sinister organization that wants to kill the Sensates. Sounds like an amazing idea, right? Well, it is! Sense8 seems like the kind of idea that could work as a Netflix series, or a primetime series, or a movie, or a comic book, or a video game! It’s just an all-around fantastic concept!

Where the concept trips up however is not just in the pacing, but in some of the character writing. Granted, the performances in Sense8 are generally very good, if occasionally a little overwrought. It’s just too bad that the actors are only given so much to work with, often ranging from looking either sad or angry, with only a couple of the Sensates feeling all that interesting in the end, especially given the sheer amount of stock character arcs on display in Sense8’s first season.

Regardless, our Sensate Cluster consists of: Will Gorski, an American cop who… Is a cop; Lito, a closet homosexual Mexican actor who is charismatic, but dishonest; Wolfgang, a German safe-cracker who is ‘the criminal’; Sun, a Korean businesswoman who is ‘the fighter’; Riley, an Icelandic DJ with a troubled past who… Is troubled; Kala, an Indian pharmacist who is being forced to marry a man she doesn’t love (yes, really); Capheus, a Kenyan bus driver with a strange Jean-Claude Van Damme fascination; And finally, Nomi, an American transgendered woman and hacker who feels like the only character that the show universally got right, especially since she’s strangely the one Sensate that the villains seem to target for most of Season One. Props to Jamie Clayton, since she’s by far the most memorable and sympathetic actress on Sense8 at this point!

It’s ironic that for a show that’s all about connection, Sense8 seems to have a hard time allowing audiences to truly connect with the characters. It’s a weird instance of the show having both too much character development, and not enough character development at the same time. Even as we get excessive peeks into the personal lives and struggles of each Sensate, who all have their own conflicts beyond the show’s villains that Sense8 seems to strangely forget about for most of its debut season, none of it seems to matter. Even by the end of the first season, so many of the characters are ill-defined reaction-based personalities, not independent, memorable personalities. As much as the show wants us to feel bad for Sun as she’s oppressed by her family for example, she’s never given enough of a personality to be anything other than ‘the fighter’. Likewise, the show tries to set up an arc where Will is tormented by the memory of a dead girl, apparently another Sensate, that kept appearing to him as a child, exacerbated by his alcoholic, disgraced father, but in the end, Will still just ends up being ‘the cop’. Too many of these characters are boring, leaving them as Deus Ex Machinas for each other to pull out at random whenever the script demands it.

Again, Nomi is the merciful exception. Nomi has just the right balance of being well-developed, entertaining, memorable, and, imagine that, actually in conflict with the show’s villains before the season’s climax! This is because Nomi is captured early on in the debut season, and is the only Sensate that is bothering to ask questions, and poke around about the extraordinary circumstances that she’s found herself in. That’s another strange mystery about Sense8. The characters seem way too cool about the fact that they’re suddenly perceiving strange things and telepathically talking to people on the other side of the planet!

In fairness, Capheus is at least pretty likable, even if his Van Damme obsession seems to define most of his personality. Lito is also a likable personality, despite his supposed struggle with being a career liar, though Lito feels like one of the most disconnected Sensates until the season finale, and his independent closet homosexuality arc feels like it belongs on a different show entirely. This is likely because Lito’s love interest is independent of the Sensates (so is Nomi’s, but Nomi’s girlfriend actually makes herself useful in the main season plot!), whereas most of the other Sensates tend to fall in love with each other, even as the show sends a mixed message about whether or not this is supposedly okay. Again, many of the characters are too flat and dull to care much about.

This is before the harsh, simple truth that too much of Sense8 is just boring as sin as well. The pacing is horrendously slow, and the show quickly feels like it collapses under its own weight in its debut season, constantly getting off-track with the over-development of characters, and the continual forsaking of the actual threat at hand. Sense8 starts to come together better in its back half of episodes, but it’s one of those shows that demands a lot of patience to sit through in most of its front half. Hell, even the back half is packed with dime store symbolism and heinously overdone direction, making Sense8 really feel like it’s trying way too hard, when it really would have been better off just relaxing, and staying focused on being the sci-fi thriller that Netflix is trying to bill it as, with the show’s advertising being pretty damn misleading in the end.

However, to the Wachowskis’ credit, they do at least know how to put together an action scene. The action scenes in Sense8 feel like they pop up far too rarely, but when they do, it’s really a treat, because they’re very well-done! Whether fights or chases or whatever else, Sense8 gets very exciting when it does finally manage to churn up an action scene. The fight choreography is very tight and intense, and the season finale does finally bring the Sensates together in something of a heist-like setup that finally has this series feeling like its grasping its true potential!

Far too often though, Sense8 ends up feeling like a very frustrating missed opportunity in its debut season. It’s a show with tons of heart and effort behind it, and I do hope that it comes back with a more refined and accessible second season next year. For now though, Sense8 is a show with very limited appeal. As an ensemble drama, it’s worthy enough to recommend, but as a sci-fi thriller, it’s very weak and aimless, especially when its lead personalities are too often boring, and difficult to invest in. Netflix has far better original drama shows to stream, so I wouldn’t consider Sense8 to be any kind of priority at this point.

That’s really a shame, since Sense8 deserves to be better than it is in its first season. The Wachowskis and their collaborators are clearly perceiving and reaching for a real masterpiece of a show. They just can’t grasp it at this point though…

Sense8: Season One Review
Sense8 is built on an excellent concept, but in its first season, it ends up a frustrating missed opportunity. Despite its efforts, the show quickly becomes an overwrought, aimless bore, one that takes far too long to actually find focus and feel like it's coming together.
THE GOOD STUFF
THE NOT-SO-GOOD STUFF
2015-06-11
62%Overall Score
Reader Rating: (3 Votes)
82%