Bandai Namco has continued to aggressively expand developments of the Tales series of RPG’s, following the especially warm release of the two Tales of Xillia games and the HD remaster bundle for the two Tales of Symphonia games on PlayStation 3 recently. Continuing to support the series’ excellent run on PlayStation 3 is Tales of Zestiria, which is currently available on Sony’s last-gen console in Japan, and will be coming to the West this year, with Bandai Namco narrowing down the release information today.

Not only does Tales of Zestiria have a release date in major territories outside of Japan now however, but Bandai Namco has also delivered the surprise announcement that the game will be expanding to more platforms! The original PlayStation 3 build will still be released in all major territories, but it will now arrive alongside all-new ports of Tales of Zestiria for PlayStation 4 and PC!

Tales of Zestiria takes place on the fictional continent of Glenwood, which is caught between two warring nations; The Hyland Kingdom, and the Rolance Empire. The game’s main character, Sorey leads a band of characters to try and restore the balance of humanity by becoming a fabled protector called The Sheperd, and also works with spiritual forces called The Seraphim to restore a ‘Legendary Time’ when humankind and The Seraphim lived in harmony. While the game is a traditional Japanese console RPG in most respects, its battles unfold in a real-time action-RPG style, as is tradition for the series, utilizing the series’ trademark Linear Motion Battle System.

While Tales of Zestiria technically marks the Tales series’ first leap to the next-gen PlayStation 4, it’s not the first development that the series has presented for Sony’s next-gen console. A few days ago, Bandai Namco announced another all-new Tales entry, Tales of Berseria, which was simultaneously confirmed for both PlayStation 4 and PlayStation 3, and will star the series’ first true female lead, called Velvet. 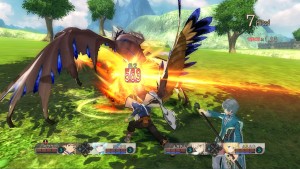 Tales of Berseria is so far only confirmed for Japan, though its chances of being localized for the West are pretty high, considering the series’ recent hot streak on PlayStation 3, especially if Tales of Zestiria ends up being especially successful in the West this Fall, and the fact that it’s coming to PlayStation 4. The PlayStation 3 is still widely embraced amongst JRPG enthusiasts in Japan, though the PlayStation 4 is off to a very slow start in the Land of the Rising Sun, where it’s just barely sold slightly over a million units after one year of release. Bandai Namco no doubt wouldn’t bother with a PlayStation 4 version of Tales of Berseria if the game wasn’t intended for the West at this point, where the PlayStation 4 continues to sell gangbusters.

Keep journeying to Eggplante for all news and updates on the Tales series.