Despite Sony’s E3 2015 press conference being mere days away, developer, Media Molecule has announced a release date for their upcoming project, Tearaway Unfolded. The game will release on September 8th in North America, September 9th in Europe, and then September 11th in the U.K.

Tearaway Unfolded is an enhanced PlayStation 4 edition of celebrated PlayStation Vita game, Tearaway. Tearaway Unfolded will feature the same gameplay with some new additions, along with a new control scheme, better performance, and, naturally, the increased resolution that can be enjoyed on a console over a handheld. Despite these improvements how 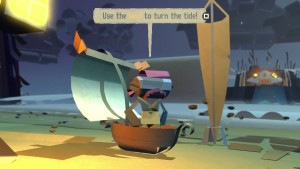 ever, many PlayStation Vita enthusiasts have nonetheless criticized Sony for putting Tearaway on the PlayStation 4 to start, which they feel is a massive undermining of the struggling PlayStation Vita platform, with Tearaway being considered one of the Vita’s top exclusives since its initial launch in 2013.

Regardless, Tearaway Unfolded will apparently be sold at a budget price of $40 USD (approximately $50 CDN), and will come not only with a standard edition, but also several special editions. These begin with the Pop-Up Pack, which gives you a gold leaf to put on your character’s head, Sackboy and Baby Wendigo-inspired papercrafts, eight custom decorations, some inspired by other high-profile PlayStation releases like God of War and No Man’s Sky, and finally, the game’s soundtrack. The Torn-Away Pack includes the papercrafts from the Pop-Up Pack, plus an exclusive God of War-inspired costume, a gold stamp for your messenger, and the Pig Crown. Finally, the most prestigious of special editions, The Messenger Edition, will include everything in the Torn-Away Pack, plus a real-life Atoi plushie, and will only be available in very limited quantities from select retailers.

Tearaway, and by extension, Tearaway Unfolded, is a platformer/adventure game hybrid that makes heavy use of the PlayStation Vita’s capabilities, and now the PlayStation 4’s Dual Shock 4 controller. It involves the player character, a messenger, having to deliver a message to the player, who is glimpsed as some sort of otherworldly being by the game.

Keep folding Eggplante for all news and updates on Tearaway.