After a long, strange journey to the big screen, Quentin Tarantino’s latest movie opus, The Hateful Eight, will officially come to theatres soon. Depending on how you wish to enjoy it however, you may get to see it sooner, or slightly later.

The Weinstein Company, the regular distributors of Tarantino’s movie projects, confirmed today that The Hateful Eight will premiere in select theatres on Christmas Day, December 25th, 2015, though only those that are eligible to screen the movie in its specialty 70mm film format. This somewhat mirrors the strategy of Tarantino’s previous movie project, Django Unchained, which opened on Christmas Day back in 2012, despite its violent subject matter certainly not being very festive.

Cinemaphiles with an enthusiasm for the science of filmmaking have heavily praised 70mm film, even in this age of digital projectors, due to its ability to capture wider landscapes of shots with greater image integrity. The disadvantage to 70mm filmmaking is that it’s costly and more difficult to shoot with, plus many studios consider 70mm film to be impractical with the ease of digital film nowadays, but Tarantino, along with several other filmmakers, are campaigning to continue the use of 70mm film, inking deals with Kodak to make this happen in turn.

If your local theatre doesn’t accommodate 70mm film however, don’t fret, as The Hateful Eight will still be released in traditional 35mm and digital formats. That said, these releases of the movie won’t happen until January 8th, 2016, leaving many conventional movie theatres having to wait a couple of extra weeks to host Tarantino’s highly anticipated latest movie. If you’ve got pressing Holiday plans, rest easy as well, as The Hateful Eight will still be screening its 70mm cut in eligible theatres during January.

The Hateful Eight has been a strange project for Tarantino, with an early draft of its script originally being leaked online in its entirety by scoop site, Gawker. Since Tarantino only showed the script to a couple of actors and their agents, he took this leak very personally, and originally cancelled all plans to make the movie, on top of initially trying to sue Gawker for uploading the script without his permission. After Tarantino calmed down a bit, he debated releasing The Hateful Eight as a novel, and at one point, a stage production, though eventually relented, and decided to make The Hateful Eight as the movie it was planned to be, doing a touch-up on the script in the process, so even those who read the leaked script won’t see the exact same story unfold on the big screen. 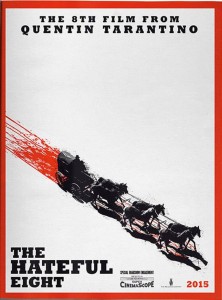 The Hateful Eight is a Western thriller that takes place around a decade after the conclusion of the Civil War. It stars Kurt Russell as John ‘The Hangman’ Ruth, who is escorting a dangerous fugitive, Daisy Domergue, played by Jennifer Jason Leigh, to the town of Red Rock, in order to be brought to justice. As the two encounter two other mysterious strangers, Major Marquis Warren, played by Samuel L. Jackson, and Chris Mannix, played by Walton Goggins, the group seeks shelter at a stage coach stopover, where they encounter four more strangers that appear to have taken over the establishment: Bob, played by Demian Bichir, Oswaldo Mobray, played by Tim Roth, Joe Gage, played by Michael Madsen, and Confederate General Sanford Smithers, played by Bruce Dern. As the truth gradually comes out about each of these characters’ backstories and motivations, the titular ‘Hateful Eight’ will soon learn why none of them may make it to Red Rock alive.

Keep herding Eggplante for all news and updates on The Hateful Eight, and other Quentin Tarantino projects.