Wales Interactive has made a name for themselves developing atmospheric, abstract and highly ambitious sci-fi stories in the indie game medium. Between Master Reboot, Gravity Badgers and Infinity Runner, this is a company who seems to have found their niche pretty quickly. Still existing well within that niche is Soul Axiom, not to be confused with recent Metroid-inspired indie, Axiom Verge, and I got a chance to go hands-on with the E3 demo of Soul Axiom’s upcoming Wii U build.

Soul Axiom is already available on Steam for PC, Mac and Linux, where it currently sits in Early Access. It’s one of the better-received Early Access games available on Valve’s PC gaming storefront as well, being a first-person puzzle-adventure game that has players operating in a digital landscape, set in a world where death is defied by one’s consciousness being uploaded to a digital backup. Aside from Wii U, Soul Axiom is also planned to release for PS4, PS3 and Xbox One this year.

The E3 demo placed me in some sort of mysterious landscape that resembled the Egyptian pyramids. I stumbled around after being promptly dropped in, mostly lost and confused, with the game providing no context or feedback whatsoever, though that’s no doubt the idea. As I fumbled around the mysterious digital environment, I cycled through two available control methods as well, starting with the default Wii U Gamepad controls. They’re pretty comfortable, and I found no objections with them, especially since the demo demonstrated off-TV play, perfectly streaming the gameplay image on the television alongside another image on the Wii U Gamepad Screen. The demo also offered a Wii U Pro Controller option, and I must say that I prefer that method, which seems far better-suited to a first-person game of this nature. Still, if you’re limited to playing with the Wii U Gamepad, it’s perfectly fine.

Not far in, I gained the ability to both enable and disable digital clusters of data, which basically means that I can make certain walls and shapes appear and disappear. The ZL Trigger phased context-sensitive objects out, while the ZR Trigger phased them back in. I got used to the ability when I had to find a wall that I could phase out, eventually leading me into a large courtyard-like area.

Again, there’s no direction or context to anything, so you have to make your way through Soul Axiom entirely on your own wits, it seems. All I had in front of me was a trio of pyramid-like structures, along with a central statue-like apparatus. When I phased different parts of the statue in and out, the apparatus would turn, and it would send a beam of light somewhere. Sending the beam to the center didn’t seem to do anything, and the mostly quiet soundtrack didn’t give me any pointers either. I was stumped at first.

Soon however, I found out that I could phase out a series of shields that were blocking the beam on both sides, and that turning the apparatus was a simple matter of looking at how the symbols were arranged on top of each structure, then matching them by carefully phasing the central structure. After using this to touch the beam on both sides, then directing it to the center, I opened the path ahead. It made me feel smart and accomplished, even if this is no doubt one of the easier puzzles that will be in the final build of the game. This was a good way to show off how the key phasing mechanic works in Soul Axiom however.

Unfortunately, the gameplay section of the demo ended here, giving way to a cutscene that teased the subject matter of the story. I was then greeted with a screen that thanked me for playing, and said that Soul Axiom was coming soon to the Wii U eShop. Right as the game truly hooked me in, it left me hanging. 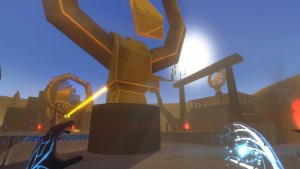 Still, this was a pretty solid way to sell Soul Axiom on consoles, showing just enough of the key gameplay mechanics, without giving away major locations or story bits. The only issue with the demo was that its framerate felt pretty lacklustre, feeling like it was unfolding at anywhere from 15-20fps much of the time. This may be fixed in the final version, but it did draw attention to the Wii U version of Soul Axiom operating on lesser-powered hardware in contrast to the PS4 and Xbox One versions that are also in development, with the game really appearing to strain the Wii U’s processor. Fortunately, the Wii U graphics aren’t much of a downgrade in contrast to the superior graphics on PC, and no doubt on PS4 and Xbox One as well. The game at least looks very sharp on Nintendo’s console, and shouldn’t be trailing too far behind its PS4, Xbox One and PC counterparts in terms of the visuals.

The E3 demo ultimately only gave a very small taste of Soul Axiom, even in contrast to what you can already experience on Steam Early Access right now, but I liked what I saw, sub-par Wii U framerate notwithstanding. The idea behind the story is very cool, and the phasing mechanic presents a lot of potential for level designs beyond this pyramid area. I’m not sure if the Wii U version will ultimately surpass the PS4, Xbox One and PC builds in this case, but if you either only own a Wii U, or vastly prefer gaming on a Wii U, Nintendo’s build is a solid enough realization of the experience, and one that feels at home with its two available Wii U control methods.

Just get that framerate up to at least 30fps, and I think you’ve sold me, Wales Interactive!