After hosting a panel to talk about a mysterious new project known as Red Ash, Comcept, the independent studio founded by Mega Man creator, Keiji Inafune, revealed the game to be exactly what fans speculated. Red Ash is indeed a spiritual successor to Mega Man Legends, the short-lived, but highly beloved spin-off to the Mega Man platformers that re-imagined the series as an action-adventure-style third-person shooter, and comes as a way to address the much-derided cancellation of the planned Mega Man Legends 3 by Capcom.

This marks the third spiritual Mega Man successor to come from Comcept. First, the company delivered a spiritual successor to the Mega Man Zero series in Nintendo 3DS-exclusive new IP, Azure Striker Gunvolt, and this will be followed in September by a spiritual successor to the classic Mega Man games, Mighty No. 9, which will come to all current consoles and handhelds, as well as last-gen consoles and PC. Unlike Azure Striker Gunvolt however, which is its own self-contained IP, Red Ash will be a spin-off of Mighty No. 9, with its main characters continuing to be called ‘Beck’ and ‘Call’, after the male and female leads of Mighty No. 9, respectively, despite being wholly separate characters. Planned platforms at this point are unknown.

As with Mega Man Legends, Red Ash will also be an action-adventure game with third-person shooting mechanics. It is now seeking funding on Kickstarter, alongside a planned anime that will be put together by Studio 4C, which has its own separate Kickstarter page, independent of the game. While Kickstarter may be lamented by some fans, particularly after some of the surprising cynicism surrounding the Kickstarter origins of long-awaited sequel, Shenmue III that went live during E3, Inafune and Comcept have clarified that seeking Kickstarter funding is not about taking shortcuts or gouging fans. It’s simply due to a desire to have Comcept maintain complete control over the Red Ash IP, just as Kickstarter allowed them to secure complete control over the Mighty No. 9 IP, which they wouldn’t have if they went to a publisher for funding. Inafune claimed that this is one of the lesser-known advantages of funding a game on Kickstarter, and this may also explain why other spiritual successors born from publisher neglect of beloved franchises, like Yooka-Laylee and Bloodstained: Ritual of the Night, also sought funding through Kickstarter, as otherwise, their studios would create the same issue again down the line, if they sought direct publisher help.

That said however, Comcept does clarify that the planned Red Ash game’s Kickstarter funding is meant for a prototype, not a finished product. The prototype will then be shopped to publishers, to showcase demand, and help Comcept make a bigger and better product from the game, beyond just dumping it on digital channels. This is similar to how Comcept struck a deal with Deep Silver to bring Mighty No. 9 to retail for current consoles, as well as offer a Collector’s Edition. As Inafune states however, the Kickstarter funding will allow deals with publishers to avoid Comcept having to relinquish the Red Ash IP to someone else. 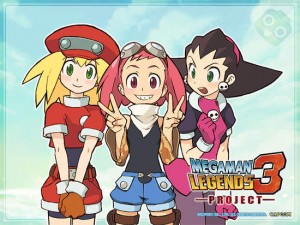 Speaking about Red Ash at Comcept’s Anime Expo panel, Inafune’s outfit revealed that Beck can switch out weapons during the game, similar to Mega Man Legends protagonist, Mega Man Volnutt, and that the game wishes to separate itself from the legacy of Mega Man Legends by unfolding in a fully anime-style world, to the best of Comcept’s ability to realize that style. Mega Man Legends artist, Kazushi Ito will be doing the art style of Red Ash, which will feature distinctly Bonne-resembling villains, with a Teisel stand-in called Tyger, and a robot (or potentially several robots) called Gofer, and also with an unnamed Tron Bonne-style female baddie as well. These characters will also rather unsubtly be called the “Bones Company”, making their inspiration pretty blatant. Famed Mega Man music composer, Manami Matsumae will also be handling the music of Red Ash, and delivered the music for the game’s reveal teaser.

The official site for Red Ash can be found at: redashgame.com, with the game’s Kickstarter page being located at: https://www.kickstarter.com/projects/mightyno9/red-ash-the-indelible-legend, and the anime’s Kickstarter page being located at: https://www.kickstarter.com/projects/mightyno9/red-ash-magicicada-by-studio4c. You can find more information on the projects within those sites, including why they’ll be the Mega Man Legends initiative that we haven’t had in over a decade!

Keep digging up Eggplante for all news and updates on Mega Man Legends, Red Ash, Mighty No. 9, and other promising Mega Man-related developments.