Minecon 2015 is now in full swing, and as they teased previously, Telltale Games has used the event to reveal the first details on their newest upcoming project, Minecraft: Story Mode.

As with most of their other projects, Minecraft: Story Mode will be a five-episode narrative-driven adventure game, and is still on track to debut its first episode this year. The game still doesn’t have a more specific release window however, and given that Telltale is currently stretched between the ongoing sagas of Game of Thrones and Tales from the Borderlands, with the recently-announced The Walking Dead: Michonne also debuting this Fall, it’s probable that Minecraft: Story Mode won’t launch until the very end of the year.

Regardless, the game is rounding up a surprising roster of talent, namely with well-regarded Hollywood comedian, Patton Oswalt voicing lead character, Jesse, whom Telltale stresses is not human-style Minecraft protagonist, Steve. Jesse will be part of a group of friends who revere the Order of the Stone, a quartet of warriors that vanquished the villainous Ender Dragon some time ago. After going to EnderCon to observe the event, Jesse and his friends discover that something is very wrong, and must subsequently go on a journey to find The Order of the Stone, before the world is obliterated. 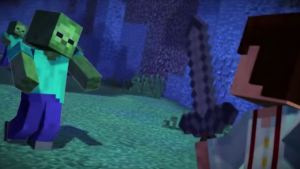 Other actors confirmed for the project include Pee-wee Herman himself, Paul Reubens, The Goonies’ Corey Feldman and Martha Plimpton, Futurama’s Billy West, and The Last of Us’ Ashley Johnson, among others. Telltale is working very closely with Minecraft developer, Mojang to realize the game’s world, with Telltale handling story and characters, along with primary game development for Minecraft: Story Mode.

Keep building Eggplante for all news and updates on Minecraft: Story Mode, and other Telltale Games projects.