Minecraft is getting an entirely separate PC and mobile upgrade to coincide with Microsoft’s imminent launch of Windows 10 in a few weeks. During this year’s Minecon, Minecraft: Windows 10 Edition was announced by Microsoft, a build of the game which will be separate from the PC version that’s already available. Microsoft stresses that those not upgrading to Windows 10 can still enjoy the regular PC version of the game, which will not be discontinued or deactivated due to the announcement of the new Windows 10 build. 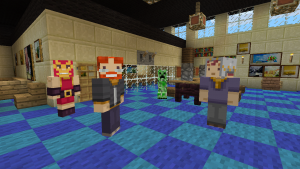 With that said however, Minecraft: Windows 10 Edition can be snagged for free, if you’ve already bought the original Minecraft PC build, and are upgrading to Windows 10 when it arrives. It will temporarily be sold at a discount for just $9.99 as well, if you don’t own the original PC version of Minecraft. As with the prior PC build, Minecraft: Windows 10 Edition will originally release in beta form, and will go live in that beta state on July 29th, to coincide with the initial rollout of Windows 10.

Microsoft claims that the new Windows 10 build aims to be an upgraded new take on the game meant to explicitly take advantage of the new technology and gaming capability that Windows 10 uniquely offers. The game will be supported both on Windows 10-enabled PC’s and tablets, and allows on-the-fly switching between keyboard/mouse, touch and gamepad controls at the player’s leisure, with the user interface adjusting immediately when the player swaps control methods. Local multiplayer and online play via Xbox Live will be supported in the game’s new Windows 10 build as well, along with the ability to capture GameDVR footage of gameplay using a built-in video recorder. Minecraft: Windows 10 Edition won’t immediately offer all of the myriad features available in the game’s current PC build, but Microsoft will eventually add them all via regular updates.

The original PC and Mac build of Minecraft remains among the most popular versions of all, with those platforms alone having found over 20 million customers to date. Minecraft is also available on iOS, Windows Phone and Android-enabled mobile devices, as well as all current Xbox and PlayStation platforms.

Keep building Eggplante for all major news and updates on Minecraft.