Looks like the rumours of Marvel’s secret actress casting call were indeed accurate. Disney and Marvel Television announced today that Marvel anti-heroine, Elektra will indeed make her debut in the Marvel Cinematic Universe during the upcoming second season of Netflix Original Series, Daredevil. Not only that, but she will also officially be portrayed by Elodie Yung, best known as lady ninja, Jinx from 2013’s G.I. Joe: Retaliation. 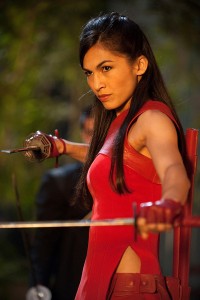 Elektra was supposedly referenced, yet never seen, during the first season of Daredevil, when Foggy Nelson talks about Matt pursuing a Greek girl during a college flashback. The press release does seem to confirm that this mysterious Greek woman mentioned by Foggy is indeed Elektra, who is famously of Greek descent in the comics, with her only description so far being that she is, “A woman from Matt Murdock’s past whose dangerous and exotic ways might be more than he can handle.” The character was previously portrayed by Jennifer Garner in the 2003 film adaptation of Daredevil by 20th Century Fox, along with starring in her own spin-off, Elektra in 2005. Garner met her recent husband, Ben Affleck on the set of Daredevil, where Affleck portrayed the title hero, and the two were married for ten years, though unfortunately, they just recently announced that they would be divorcing.

In Marvel Comics lore, Elektra is simultaneously a love interest, an ally, and occasionally a foe of Daredevil. She is a lethal assassin with no superpowers, but exceptional combat abilities, best demonstrated by her mastery of her trademark dual sai daggers. The character was created by famed comic book writer, Frank Miller, where she made her debut in Daredevil #168 in 1981, becoming a staple of Daredevil’s stories ever since. Elektra also has a key association, both as supporter and sworn enemy, of secret Marvel Universe ninja organization, The Hand, the presence of which was teased at length during the first season of Daredevil.

Elektra won’t be the only Marvel hero making her debut in the MCU during Daredevil’s second season. The Walking Dead’s Jon Bernthal will also be portraying deadly Marvel vigilante, Frank Castle/The Punisher during the next run of episodes, where he will initially be coming into conflict with Daredevil after operating his vendetta within Hell’s Kitchen.

Daredevil’s second season will come to Netflix in 2016, though will be preceded by another MCU-set Netflix Original Series, Jessica Jones, currently scheduled to debut its first season at the end of this year.

Keep stabbing Eggplante for all news and updates on Daredevil. and other projects in the Marvel Cinematic Universe.