NOTE: This article contains a spoiler for the Season Five finale of Game of Thrones, namely a controversial character death.

Looks like Game of Thrones will have a bit more legs than previously indicated. Despite HBO stating that the show was, “In the home stretch” with the recently-wrapped Season Five a little while back, the premium adult network has now stated that the show will last at least eight seasons, with the current plan having it on the air until at least 2018. Even then, the conclusion is not definite, and the series will go on as long as it has to, in order to tell the story it needs to tell. 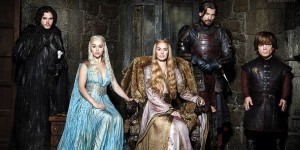 This may be a bit of a surprise to some fans of the A Song of Ice and Fire source novels, since only two remain to be adapted, The Winds of Winter and A Dream of Spring, neither of which has been properly completed and released by author, George R.R. Martin at this point. Despite that however, Season Five made more deviations from the source material than ever, and this seems to open the door for HBO being given license to take increased liberties with the story, which will naturally allow the show to last longer.

Even beyond HBO, the world of the Game of Thrones TV series was further expanded, starting at the end of last year, with Telltale’s episodic Game of Thrones adventure game, which just recently released its fifth episode of six, A Nest of Vipers. The game revolves around House Forrester, a faction never seen in the TV series, though mentioned more than once in the source novels, a Northern house loyal to the Starks, and struggling to maintain existence, as the North becomes threatened between the events of Season Three and Season Five. Despite the lead character personalities being invented for the game, the Forresters do occasionally interact with familiar characters like Tyrion, Cersei and Daenerys from the novels and TV series, each voiced by and given the likeness of their TV actor.

Despite news of the series having a multi-year lifespan already planned for it, the HBO executive confirming the plans at the recent Television Critics Association tour did state that the show is not being kept going simply because it’s HBO’s biggest and most popular series at present. The show will reach a natural endpoint, and it won’t go on longer than it has to. The network does however already have the story material in place to keep the show going through to Season Eight.

Even more interesting however is HBO bringing up the potential for a Game of Thrones spin-off series. They claim that the story possibilities in George R.R. Martin’s fantasy universe are very vast, and this includes an idea that the network is considering for later, which would be a prequel to the events of the main series. Though not stated by HBO, one possibility could potentially have it star Lyanna Stark and Rhaegar Targaryen, who are already dead during the events of the main HBO series, though these characters are instrumental in catalyzing the events of the current series, namely the annihilation of House Targaryen, former holders of the Iron Throne, which was seized by Robert Baratheon shortly before the main series kicked off. Of course, the lore may stretch even further back, and should HBO end up pursuing the spin-off, there are myriad other possibilities as well.

With these exciting news nuggets however does come some bad news from HBO, for those who were shocked and angered by the death of a fan-favourite character during the Season Five finale, albeit one that also occurred in the source novels, even if it was under different circumstances there. They bluntly stated, when asked about fan theories going around online about whether he may return to life somewhere down the line for the series, that Jon Snow is dead, and he’s not coming back. Dead is dead in Game of Thrones, and that’s not changing, according to the HBO executive answering the question.

There’s always the possibility that HBO is lying, but one probably shouldn’t hold their breath at this point, as the show has not resurrected any other dead characters, at least not as anything but villainous White Walkers, so it looks like they won’t be changing that stance now, especially with the Wall no doubt being smart enough to burn Jon’s remains to prevent him becoming a White Walker, and building the ranks of the enemy. Looks like Jon Snow’s Watch has indeed ended, until further notice.

Worse still is that Jon Snow’s apparent death now seems to disprove a popular fan theory about the prospective end of the series, which was believed to have Jon Snow outed as the lost son of Lyanna Stark and Rhaegar Targaryen, entrusted to Ned Stark to be falsely claimed as Ned’s bastard son, so that House Stark could protect him as the last Targaryen (Daenerys being alive is not common knowledge in Westeros), who has claim to the Iron Throne. Jon Snow was also believed to be the reincarnation of legendary hero, Azor Ahai (whom sorceress, Melisandre incorrectly believed was Stannis Baratheon), who would save Westeros from the White Walkers, then marry Daenerys, with the two then taking the Iron Throne and ruling Westeros. Perhaps another conclusion entirely will now take place with Jon’s death.