His better half was confirmed for the series long ago, and even made a brief cameo in the first season finale of The Flash a couple of months back, but finally, the DC Television Universe has found its new Hawkman! The Nth Metal-powered flying hero will be portrayed by Falk Hentschel, who is perhaps best recognized amongst comic book media enthusiasts as one-off villain, Marcus Scarlotti, a.k.a. Marvel’s Blacklash, from the previous second season of Marvel’s Agents of S.H.I.E.L.D. series.

Hentschel will mainly portray Hawkman for the upcoming midseason series, Legends of Tomorrow, which marks the latest expansion of The CW’s DC Television Universe, currently shared between Arrow and The Flash, and soon to incorporate animated CW Seed spin-off, Vixen towards the end of this Summer. Hentschel’s Hawkman will debut this year however, in the latest upcoming crossover episode between Arrow and The Flash, which will air this Fall, and presumably set the groundwork for Legends of Tomorrow.

Hawkman is described as being quite similar to his DC Comics counterpart for The CW’s DC Television Universe, going under the civilian alias, Carter Hall, and being the latest reincarnation of an Egyptian prince, who, along with his soulmate, most recently reincarnated as Kendra Saunders, DC’s Earth-2 variant of Hawkgirl, can tap into the flight powers of the Egyptian god, Horus. This could possibly suggest that Hawkman and Hawkgirl’s powers may be fully fueled by divine means in the DC Television Universe, and may not rely on the gravity-defying Nth Metal, as they often do in DC lore, though the potential absence of Nth Metal in the DC Television Universe is currently not confirmed.

While Hawkgirl is appearing in live-action for the first time in Legends of Tomorrow, played by Ciara Renee, Hawkman has made a handful of live-action appearances beforehand, most notably in The CW’s wrapped Superman prequel series, Smallville, where he was portrayed by Michael Shanks. Hawkgirl was mentioned by Hawkman frequently on Smallville, though was never actually seen on the series, with Hawkman only able to be reunited with her in death, presumably before they were reincarnated again later. 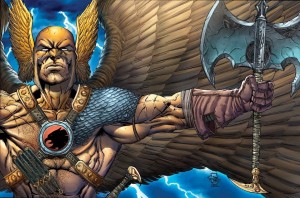 Arrow will begin its fourth season on Wednesday, October 7th, while The Flash kicks off its second season on Tuesday, October 6th, with both shows in their usual 8:00-9:00 P.M. timeslots. Look for Legends of Tomorrow on The CW in early 2016.

Keep flying to Eggplante for all news and updates on Legends of Tomorrow, and other big developments for the DC Television Universe.