Comcept hasn’t been having a very good time lately, particularly after the recent Kickstarter debacle of the infamously botched and poorly communicated funding effort for Mega Man Legends successor, Red Ash. Things just got worse for Mega Man creator, Keiji Inafune’s outfit as well, as their high-profile Kickstarter-funded game release, spiritual classic Mega Man successor, Mighty No. 9, has now been delayed out of this year, according to a post made by the developers on NeoGAF, then corroborated at Gamescom. The game was originally intended to debut on September 15th, for all of its planned platforms, save for the handhelds. 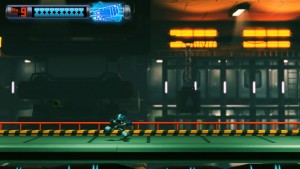 This is another blow to the otherwise hotly anticipated Mighty No. 9, after retailers like Best Buy and Amazon ended up cancelling most of the pre-ordered Collector’s Editions of the game in advance at the start of the Summer, due to a lack of supply. Fortunately, the game isn’t delayed too far into 2016, with Comcept still claiming that it will launch within the fiscal year, meaning that it will be available between January and March 2016, or at least that’s the current plan, even if no solid release date is currently decided. They reinforce the window by stating that the base game and its assets are all fully completed, but they made the decision not to launch with a broken online component, feeling that it would negatively affect people’s enjoyment of the experience. It’s probable that this delay is due to the company now being extra careful, after the Red Ash fiasco earned them quite a bit of negative press, which they obviously want to avoid with Mighty No. 9, something that they’re grooming as a flagship property for the studio.

Comcept originally planned to release Mighty No. 9 as an indie game release on digital storefronts only, though they’re now partnering with publisher, Deep Silver to make retail packages for the current-gen console editions on PlayStation 4, Xbox One and Wii U, with the PlayStation 4 and Xbox One builds also getting Collector’s Editions. Some reports also claim that the handheld versions for Nintendo 3DS and PlayStation Vita, which were planned to release after the initial console and PC builds, may also end up with retail packages.