UPDATE: After Nintendo laid out release plans for the next selection of Amiibo figures, they’ve clarified some confusion regarding availability plans for Canada in particular. First, the Retro 3-Pack that contains the Duck Hunt Dog, R.O.B. the Robot and Mr. Game & Watch Amiibo figures, is indeed exclusive to Gamestop/EB Games in North America, and did go live for pre-order both in-store and online in Canada on August 8th, as rumoured, and at least in-store for the U.S. on the same day. Second, Amazon has now uploaded placeholder pages for the Ganondorf, Olimar and Zero Suit Samus figures that are also coming out this September, which are not listed as Amazon-exclusive, appearing to indicate that they will be sold from all major retailers across North America on September 11th. Dr. Mario and Bowser Jr. are absent however, possibly indicating that they may be retailer-exclusive in North America, though which retailer may be holding either of them to itself is currently undisclosed.

Nintendo has confirmed its next wave of Amiibo release dates, specifically for what is referred to as ‘Wave 5b’ for the Super Smash Bros. set, after ‘Wave 5a’, comprised solely of Palutena and Dark Pit, released this past July. Apparently, this includes a delay for one part of the figures, along with a rather shocking (and potentially) annoying strategy for three others. 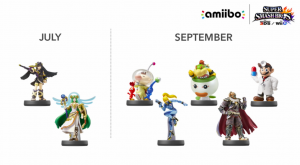 First, five new Super Smash Bros. set Amiibo will be launching on September 11th, to coincide with the release of Super Mario Maker on Wii U. These will include: Bowser Jr., Dr. Mario, Captain Olimar, Ganondorf, and Zero Suit Samus. It’s unknown whether any of these figures will be retailer-exclusive, as has often been the case with several Amiibo variations to date since Wave 3, but Nintendo encourages fans and Amiibo collectors to stay tuned for more information closer to the date.

Next, the 30th Anniversary Mario ‘Classic Colours’ Amiibo will also release on September 11th, alongside Super Mario Maker, which is the main game it will function with. The Amiibo will apparently be sold separately. The ‘Modern Colours’ rendition of the 30th Anniversary Mario Amiibo is currently without a release date however, and will apparently not be available for the launch of Super Mario Maker. Nintendo didn’t give a reason why.

Finally, rumours of the ‘Retro 3-Pack’ set appear to have been accurate. Nintendo has announced that three Super Smash Bros. set Amiibo, namely Duck Hunt Dog, R.O.B. the Robot, and Mr. Game & Watch, will exclusively be offered in a ‘Retro 3-Pack’ bundle, which will be sold on September 25th. It was rumoured that Gamestop would host an exclusive ‘pre-order event’ day in the U.S. for this bundle on August 8th, though Nintendo didn’t confirm this, nor whether the Retro 3-Pack would be exclusive to Gamestop/EB Games. Canadian EB Games outlets appear to be oblivious to these plans to boot, further making the Retro 3-Pack’s availability in Canada all the more confusing.

It will be a crowded and expensive September for Amiibo collectors, but fortunately, some of the pressure is being alleviated. The Mii Fighter figures have been delayed to November, and will now be bundled in their own 3-pack, rather than sold separately. It’s still unknown whether the Mii Fighter Bundle will be offered at all major retailers as well, or will be exclusive to one of them. On another note, the lone remaining Super Smash Bros. set Amiibo, Falco, now appears to be completely M.I.A., if one doesn’t count the planned figures for the current quartet of DLC fighters, Mewtwo, Lucas, Roy and Ryu.

Keep collecting Eggplante for all news and updates on Amiibo.