A rather curious piece of artwork has been making the rounds online today, courtesy of Arrow executive producer, Marc Guggenheim. You can check it out below: 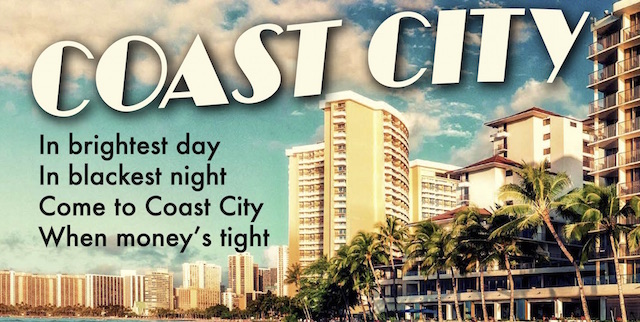 While this might seem like a rather innocuous reference to an oft-mentioned location in The CW’s DC Television Universe, to those who got their start with DC Entertainment on Arrow and/or its sibling series, The Flash, longtime DC fans know that this is no doubt yet another of DC’s giddy fan-riling teases.

If you aren’t aware, Coast City is the home of Hal Jordan, the original Green Lantern superhero of DC Comics lore, if you don’t count Golden Age forerunner, Alan Scott. The fictional burg, a DC Universe rendition of a locale like San Diego or Los Angeles, has been mentioned in passing several times since the first season of Arrow back in 2012, and was even seen for the first time during a brief intro sequence in one episode of The Flash earlier this year. Ferris Air, a fictional aviation firm and airline owned by Jordan’s better half, Carol Ferris, has also been mentioned more than once in the DC Television Universe, and was targeted by flashback villain, Edward Fyres during the first season of Arrow as well.

Speculation of a possible Green Lantern appearance in the DC Television Universe was then kindled tenfold during the penultimate episode of The Flash’s first season this year, when Barry Allen and co. visit a Ferris Air facility with The Rogues, and it’s directly mentioned that the facility was shut down after a test pilot went missing. This pilot is presumably Hal Jordan, whisked off to the faraway planet, Oa to begin his training in the Green Lantern Corps.

Adding more fuel to the fire was Arrow actor, David Ramsey, who portrays the title character’s sidekick and bodyguard, John Diggle on the popular CW series, confirming in an interview that the showrunners have discussed his character possibly eventually being outed as actually being John Stewart, the other most famous name to take up the Green Lantern mantle in DC lore. This would also explain the otherwise improbable friendship between non-powered billionare playboy, Green Arrow, and high-powered, will-bending superhero, Green Lantern that has frequently come up throughout DC Comics history.

John Stewart is also one of the most high-profile African-American superheroes in the comic book industry, and given Diggle’s own African-American race, that would also fit neatly into place, were he to be outed as the DC Television Universe’s rendition of John Stewart. If it does end up being the case though, it might create a curious gaffe in DC Comics canon, as Diggle was formally introduced into the DC Comics Universe quite recently, once again as a sidekick to Green Arrow, following his positive reception by fans on Arrow, the TV series, which he was originally invented solely for. 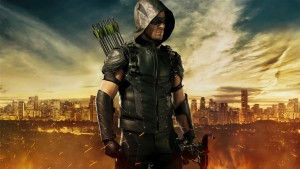 There’s no mistaking the tease behind the art as well, as the tourist tagline directly references the oath of the Green Lantern Corps, which begins with, “In brightest day, in blackest night, no evil shall escape my sight.” If we’re going by a former claim by DC Entertainment boss, Geoff Johns as well, we know that DC doesn’t introduce teases and references in the DC Television Universe for no reason. If they’re bothering to bring something up, they’re going to deliver a payoff eventually. Looks like that payoff may finally occur during the upcoming fourth season of Arrow. The jab at a low budget vacation might also be a way to reference television budgets being smaller than movie budgets.

Arrow’s upcoming fourth season has already been confirmed to expand the scope of the DC Television Universe in some drastic ways, and being the vehicle with which Green Lantern might be introduced to the small screen could be a big way to do it. The series is already confirmed to have Matt Ryan reprising his role as the title character from NBC’s cancelled DC-inspired drama series, Constantine (which is having its 13-episode canon retroactively added to the overall canon of the DC Television Universe of The CW), and a new crossover event with The Flash this Fall will also set the stage for next year’s upcoming DC Television Universe expansion, Legends of Tomorrow. 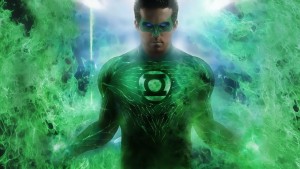 Given the rather poor reception to 2011’s ill-fated and self-contained Green Lantern movie starring Ryan Reynolds, it’s possible that DC may wish to re-introduce the character to the public consciousness in a more favourable light, before he once again takes center stage in the big screen DC Cinematic Universe, between the two confirmed Justice League crossover movies in 2017 and 2019, and 2020’s Green Lantern Corps, which will presumably team up several incarnations of the beloved DC hero in one movie. Given the huge success of Arrow, and the even bigger success of The Flash, which has won several esteemed television awards since debuting last year, it seems that DC is hoping that the positive reception of the DC Television Universe overall will overshadow any potential bad vibes from a re-introduction of Green Lantern in live-action.

Regardless, Arrow begins its fourth season on Wednesday, October 7th, and The Flash starts its second season on Tuesday, October 6th, both in their usual 8:00-9:00 PM timeslots on The CW, and CTV for us Canadians.

Keep willing Eggplante for all news and updates on the DC Television Universe, and other developments related to live-action portrayals of Green Lantern.