Highly anticipated PlayStation 4 exclusive, Uncharted 4: A Thief’s End, has gotten its release plans ironed out by Sony today. The apparent finale to the tales of treasure hunter, Nathan Drake will hit both retail and the PlayStation Store on March 18th, 2016. This comes after the game was originally planned to debut this year, but ended up slipping into next year. 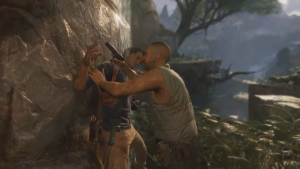 Along with revealing the date on the PlayStation Blog today, Sony also laid out multiple Collector’s Editions that fans can pre-order, on top of the standard edition of the game. The first, the $79.99 USD ‘Special Edition’ available at retailers, includes a steelbook case, a 48-page hardcover art book, a Naughty Dog and Pirate Sigil set of stickers, and an undetermined amount of Naughty Dog points, which are in-game currency used to unlock multiplayer content.

The second specialty package for Uncharted 4: A Thief’s End that retailers will offer in limited quantities, is the Libertalia Collector’s Edition, which goes for $119.99 USD. The Libertalia Collector’s Edition includes everything from the Special Edition, plus a 12” statue of series protagonist, Nathan Drake, three multiplayer costumes, two custom weapon skins, a Henry Avery Sigil baseball cap, and something called Madagascar Sidekick costumes, presumably for the single-player campaign.

If you’d rather own a digital copy of the game, Sony’s got you covered there as well, starting later this week. Those who pre-order Uncharted 4: A Thief’s End digitally from the PlayStation Store, will have the option of pre-ordering the Digital Deluxe Edition for $79.99 USD. This includes two multiplayer customization bonuses (for some reason, PlayStation Blog is vague on what these are), two multiplayer bonus packs that will net you rare and legendary gear for the game’s online multiplayer suite, and finally, exclusive access to a bonus single-player segment that seems to be initially unavailable in any other edition of the game. If you’re interested, but already pre-ordered the game on the PlayStation Store, fret not, as Sony is allowing people who have already pre-ordered the game digitally to secure access to the Digital Deluxe Edition, so long as they agree to a $20 upgrade fee.

Uncharted 4: A Thief’s End bills itself as a finale for the series as we know it, taking place three years after the events of the series’ previous mainline entry, Uncharted 3: Drake’s Deception for PlayStation 3. With Nathan Drake now retired from treasure hunting, he’s ready to settle down in a normal life, with his new wife, former battle partner, Elena Fisher. When Drake’s brother, Sam turns up however, previously believed to be dead, Drake is roped into one last grand, globetrotting quest to discover the secret of a lost pirate fleet, with his final adventure pushing him to the limits, and seeing how much he’ll sacrifice in the name of answers.