NOTE: Full spoilers for this week’s episode of Gotham, including a major character death, are present in this review

Holy crap, Gotham! You really kicked it up a notch! I’m not just talking about the overall quality of “Knock, Knock”, which is arguably the show’s best episode in quite a while (probably the best since “Everyone Has a Cobblepot” from Season One), but also the surprisingly violent, brutal content this week. With the establishment of Theo Galavan’s new group of villains, The Maniax, the show wastes no time upping the violence, bloodshed and terror for Gotham City, and this leads to one of the most visceral and satisfying episodes that the show has had yet! The episode even begins with The Maniax dropping bodies off of a building as a Gotham City editor-in-chief demands that his newspaper find a real headline, oblivious to his employees’ horror when they look at the window. You mean Gotham executed a darkly comedic scene that actually really worked? Boy, we’re being spoiled this week!

Naturally, this episode is all about The Maniax, to the point where we actually don’t even see Penguin or the mob at all this week. That’s not a bad thing though, since it means that we can go full tilt on establishing this brutal, deranged group of villains. Even the corrupt Mayor James isn’t safe from the vicious designs of Theo Galavan, who locks his head in a box and threatens to drop a poisonous tarantula in it if James doesn’t give him what he wants, only to have it revealed that he lied about the tarantula, before handing James off to be tortured for amusement by his sister and Barbara Kean. I must say that Theo Galavan is actually proving to be a pretty capable villain so far, and Gotham even manages to have you believe that he can control The Maniax just fine, thanks to some brilliant scenes of Theo beautifully manipulating them to get the result he wants, without them realizing, including appointing Jerome Valeska as their leader, as he is the most effectively theatrical.

After a tense scene of Gordon having to outline the Maniax profiles for the GCPD, complete with him having to hide his emotions when he announces Barbara at the end of the slideshow, the villains surface again, now capturing an entire school bus full of high school cheerleaders. This was a wonderfully intense and terrifying scene, with Jerome announcing that it was between the bus and a seniors’ bingo club (though in true proto-Joker fashion, this could very well be a twisted lie), as he forces the cheerleaders to spell out, “O-N-O, Oh no!” as he douses the bus and everyone in it in highly combustible fuel, and prepares to set it ablaze with a lighter!

Now, before your stomach really turns, FOX is still an FCC-subject network, and things don’t quite go as planned. Jerome’s lighter ends up not working, and he’s forced to try and borrow a lighter from fellow Maniax member, Arnold Dobkins. This lighter doesn’t end up working either, and Jerome and Robert Greenwood are soon after distracted by the timely arrival of Gordon and some cops. The cops manage to drive off The Maniax, and Gordon even steers the bus away right as Dobkins’ lighter starts working, narrowly saving it from going up in flames, without a single fatality. Gordon even manages to detain and interrogate Dobkins, though he doesn’t get far before Dobkins takes a sniper bullet to the head, courtesy of Tabitha Galavan, who was apparently watching the whole event from atop a building… Presumably. The fact that she didn’t fire on the GCPD in that case is a little odd, though you could make the case that this would have caused her to be seen.

Meanwhile, Bruce and Alfred manage to find their way to Bruce’s father’s computer, which Alfred destroys, claiming that what is on the computer probably led to Bruce’s parents being murdered, and Bruce will be next if he looks on it. Bruce is so angry at Alfred destroying the computer that he fires him outright, and for a little while, the show actually makes it look like this is going to stick! Of course, it doesn’t, since Bruce ultimately (somehow) makes it to Alfred’s train station and coaxes him back, with Alfred delivering the condition that, if Bruce is going to be trained in the world of his father’s dark secrets, he must do whatever Alfred says without question. Bruce even offers to attend school again, much to Alfred’s delight, and no doubt paving the way for that Hush storyline that Gotham’s showrunners promised for this season.

Frankly, I’m glad that Alfred didn’t make an exit though, even temporarily, since Sean Pertwee is one of the best actors on this entire show, and his Alfred is always a sublime, badass presence! Even then though, isn’t Alfred Bruce’s legal guardian? Bruce is a minor, so it shouldn’t be possible for him to fire Alfred, since Bruce is in his legal custody! Granted, Alfred could have very well anticipated the boy being impulsive and eventually calming down (hence why Bruce was so easily able to get to him at the train station, despite not being able to drive), and planned to return home anyway if Bruce somehow didn’t come, but still, even if this led to a good development, there was no way that Alfred being fired would fly, so I’m surprised the show even attempted this.

Granted, this scene does lead into the first proper meeting of Alfred and Lucius Fox, at Lucius’ favoured bar. This is another fantastic scene, with Alfred telling Lucius that, in tipping off Bruce that there were secrets to uncover at Wayne Enterprises, he forced Alfred to ask for his help in keeping Bruce safe, as he prepares to take on his father’s dark legacy. Alfred then tells a story about a man he promised the end of if he broke his trust, and when the man did break his word, well, Alfred didn’t break his, so to speak. The point was made very clear, and the two entered an uneasy alliance, with Lucius even starting work on fixing the broken computer. This nicely lays the groundwork for the friendship and alliance between Bruce, Alfred and Lucius when Bruce begins his tenure as Batman, and it should hopefully add another cool new dynamic to Gotham, as Bruce takes the next step in his own storyline.

We even got a very good scene with Harvey Bullock this week, when Gordon tries and fails to convince him to come back to the GCPD. Bullock refuses, particularly when this episode reveals that he became engaged to Scottie, the woman he rescued from Scarecrow Sr. during the events of “The Fearsome Dr. Crane” last season (a great callback to Bullock’s heroism in that episode, and a likely explanation of how he was able to turn his life around so quickly after leaving the force), and Scottie makes no bones to Gordon about her not wanting Bullock to rejoin the GCPD. Clearly, Scottie blames a lot of Bullock’s problems on his police work, though we still see that glimmer of a cop that refuses to die in Bullock, when he gives Gordon a necessary lead in his investigation, even with Scottie being present. 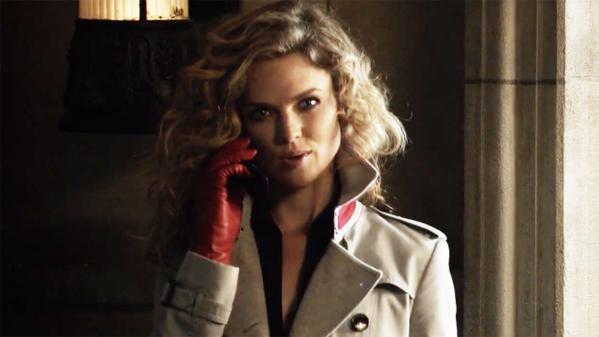 The episode was still saving its highlight for the climax however, as The Maniax infiltrate the GCPD disguised as cops (a very cool nod to the Joker’s first appearance in the 1940’s Batman comics), and immediately begin gunning down every officer in the vicinity. Commissioner Essen is then captured, and Jerome begins to intimidate her, delivering another beautifully twisted scene, with Jerome even killing Greenwood in the process, simply for interrupting him, and Essen trying to remain true, even in the face of certain death.

Gordon meanwhile chases down Barbara in an alley, and fails to talk her out of siding with The Maniax, before being beaten up by Amygdala, though Barbara calls him off before Gordon can be fully beaten to death. When Gordon regains consciousness, he returns to the GCPD to find almost everyone dead, the place in shambles, and The Maniax having escaped. Fortunately, Leslie survived the attack by hiding, and Nygma even saved Ms. Kringle from being killed (likely laying the groundwork for a romance between these two), though the situation is different for Commissioner Essen. Gordon returns to her side, seeing that she’s been shot herself, and after reminding him of their renewed resolve to clean up the GCPD and Gotham City at large, she dies right there. Yep, Gotham has now killed off another noteworthy character from the Batman comics, so it looks like Gordon won’t be getting that second wife, or even the first, since Barbara Kean is also clearly going along a different path than her comic book counterpart now.

This attack quickly cements The Maniax as some of the most dangerous and unpredictable villains that this series has ever seen. The GCPD has been hit before, but never this hard, or with this many losses. There is a small bright spot however, as Bullock goes to see Gordon in Essen’s office, and reveals that he re-joined the GCPD, saying that Scottie will either understand, or she won’t. This was very satisfying to see, even though viewers no doubt anticipated that Bullock couldn’t stay away from being a cop forever. Bruce even apologizes to Gordon for his tirade last episode, with Lucius and Alfred joining to visit the GCPD, and show their support. The episode then ends rather brilliantly, with Gordon and Bullock playing a video recording left by Jerome, saying that The Maniax are just getting started, and that they strive to liberate Gotham City from its mundane existence of sanity, directly corroborating the group’s and Jerome’s connections to The Joker, who has the exact same ideal in most Batman media. The episode ends with a final cackle by Jerome at the end of the recording. Oh boy.

Like I said though, Gotham hasn’t been this good in quite a while, especially considering the problematic final episodes of Season One. “Knock, Knock” quickly and violently cemented The Maniax as dangerous, exciting and highly satisfying baddies, and Bruce and Alfred also got a very strong B-plot in turn, even if we knew that Alfred’s firing clearly wouldn’t stick, and nor would Bullock leaving the GCPD for that matter. Season Two is finally achieving excellent new highs though, and if The Maniax are just an appetizer for what we have to look forward to later, then this will mark the start of a more refined and appealing second season for Gotham all around!

Gotham 2.2: "Knock, Knock" Review
Gotham really kicked it up a notch with one of its best episodes in a long while, hitting the city hard with the violent and terrifying Maniax crime wave, and paving the way for Bruce to grow up in some pretty drastic ways!
THE GOOD STUFF
THE NOT-SO-GOOD STUFF
2015-09-29
90%Overall Score
Reader Rating: (0 Votes)
0%