The Big Bang Theory fortunately cheered up a bit this week, without wholly sacrificing the more morose breakup drama of the season premiere. The show sadly wimped out of any serious consequences for one of the troubled couples in the eleventh hour, but “The Separation Oscillation” still mostly delivered a solid half-hour of comedy.

The episode begins with Leonard having a rather chilling dream about Penny kissing Sheldon. It’s almost unfortunate that this moment was inevitably a fake-out, since that would have been a really unexpected way to throw a wrench in the dynamic of both the Leonard/Penny and Sheldon/Amy interactions! Fortunately, we still got plenty of great material from Sheldon, who returned Amy’s stuff to her, throwing in a sultry red bra that he stole from Penny in the process. His casual returning of the bra to Penny as she sat beside Leonard on the couch was pretty hilarious too. 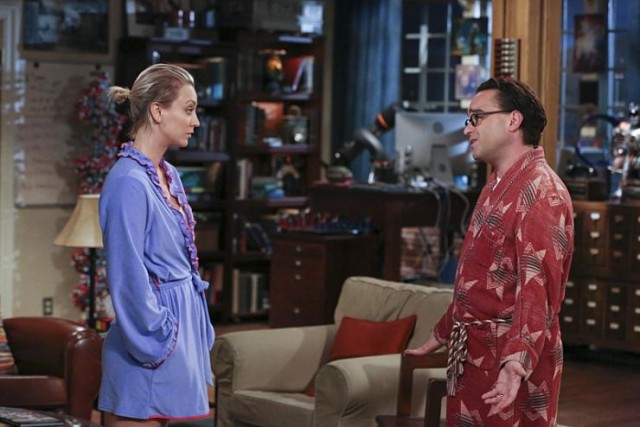 Sheldon also owned this week’s episode with a laugh-out-loud return to “Fun with Flags”, his YouTube series. Sheldon bitterly recounting all of the things that frustrated him about his relationship with Amy under the guise of squabbling nations was absolutely hysterical, especially when we learn later that Sheldon E-mailed a link to the episode to Amy, with the direct subject line that it will make her mad. It’s very childish, sure, but should we really expect any less of Sheldon, especially when the laughs proved this great?

As for the rest of the characters, their humour was more serviceable than hilarious, but it got the job done. Leonard gets to confront Mandy and ask her to talk to Penny about how their kiss meant nothing, though this wasn’t as funny a moment as some may have hoped, even as Leonard begins to dump his problems on Mandy, citing that a therapist is too expensive. It’s still funny, and a highlight moment this episode, but certainly not a gut-buster. Fortunately, this was preceded by some good material with Howard and Raj, with Howard revealing that he knows off the top of his head how much marriage counselling costs (because of course he does), followed by both Howard and Raj taking turns coming up with creative ways to announce intent to have sex with Mandy, within puns about her being a marine biologist. Again, it was childish, but after the almost oppressive bleakness behind last week’s humour, that’s quite forgivable here.

There was also a small subplot that was introduced, about Bernadette actually being aware of Leonard cheating on Penny, since Howard blabbed it to her. Bernadette is predictably awkward around Penny when she confides in Bernadette and Amy about her insecurities with Leonard, and there were some chuckles in Bernadette trying way too hard to cover up that she knew something about what happened, and failed to disclose it to Penny at the time. In fact, given that Penny and Bernadette both have tempers, it was sort of surprising that the episode didn’t have the truth come out, and start a fight with the two.

In fact, if I’m being honest, that was sort of the big weakness with “The Separation Oscillation”, even though it was otherwise a good episode. There just weren’t any real consequences to any of the plots. The only thing that is really sticking for now is the break-up between Sheldon and Amy, but even then, despite Amy yelling at Sheldon to take down the video, nothing really comes of this that didn’t already happen. Hell, Amy still answers Sheldon’s calls on Skype! You’d think she’d go to more effort to ice him out, even though Sheldon is inevitably a handful when it comes to space.

Likewise, Leonard and Penny confide their separate insecurities in each other, and rather than go to marriage counselling, or take space themselves, or make any change at all, the two simply hug it out and forgive each other, and move on as if nothing happened. Seriously? Given how much the show loves Leonard/Penny drama, to a fault, this almost felt shocking, were it not for the episode also sweeping the Bernadette subplot under the rug. Moreover, it sort of felt like a cop-out. The show made such an uproar about Leonard and Penny immediately facing challenges in their new marriage, but now, the show already seems to be wimping out of seeing that through. It’s as if the writers already ran out of ways to challenge these two in their early married life, without re-treading former conflicts, which is perhaps inevitable when you consider that this series has been going on for a superb nine years now.

Still, the episode got the job done this week, and it’s nice to see the series brighten up a bit again, even if it did feel like only Sheldon and Amy are still seeing consequences to their break-up. Nonetheless, “The Separation Oscillation” delivered solid laughs and plenty of heart, even if its storylines could have used a bit more teeth.

The Big Bang Theory 9.2: "The Separation Oscillation" Review
The Big Bang Theory mercifully brightened up a bit this week, though sometimes at the expense of satisfying story resolutions, with Leonard and Penny having a hasty, somewhat lazy make-up, and only Sheldon and Amy still being seriously emotionally challenged for now.
THE GOOD STUFF
THE NOT-SO-GOOD STUFF
2015-09-29
78%Overall Score
Reader Rating: (0 Votes)
0%