Despite being planned as the start of a new trilogy for the Terminator movie franchise, Terminator: Genisys was a critical punching bag and a box office disappointment after it hit theatres for the start of July, despite being a massive success overseas, which eventually led to a $440 million worldwide gross. Thanks to poor domestic sales however, Terminator: Genisys ended up being this past Summer’s second-worst box office bomb, grossing approximately $90 million in North America, against a rather large $155 million budget. This commercial failure is only surpassed by 20th Century Fox’s reviled Fantastic Four reboot, which grossed a pathetic $55 million in North America, against a $120 million budget (and unlike Terminator: Genisys, it tanked in most international markets too), making it the lowest-selling blockbuster of the Summer. Obviously, in both cases, initial budgets don’t account for potential reshoot fees, marketing costs, and DVD/Blu-Ray packaging and distribution, among other things.

Despite Terminator: Genisys being profitable on paper, insiders claim that, even with the big international ticket sales, the movie is still projected to lose money for studio, Paramount. Because of this, the studio has gotten cold feet with the two planned sequels, and they’ve both now been put on indefinite hold, which was directly confirmed by Paramount to The Hollywood Reporter today. The first sequel was scheduled to release on May 19th, 2017, with the third movie set for June 29th, 2018, though those dates have obviously now been vacated. A television series planned to tie in to this new movie trilogy has also been put on ice, in response to the box office failure of Terminator: Genisys.

Starring Emilia Clarke, Jai Courtney, Jason Clarke and Matt Smith, and featuring Arnold Schwarzenegger reprising his iconic role as the T-800, Terminator: Genisys rebooted the storied sci-fi saga that James Cameron began in 1984 with beloved blockbuster movie hit, The Terminator, which, alongside 1982’s Conan the Barbarian, was the movie that made Schwarzenegger an action superstar. With Kyle Reese sent back in time to 1984, he discovers that history has been changed, and everything has happened too early, with Sarah Connor already having a T-800 at her side, and already being a bona fide badass. Together, they travel to 2017 to prevent Skynet’s new plan for destroying the future. 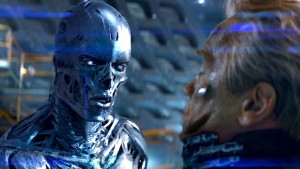 We reviewed Terminator: Genisys for its theatrical release in July, and were lukewarm about it, awarding it a 64% overall score. We found that the action sequences were enjoyable, but the storyline was a mess, the direction feels very awkward and tone-deaf, and most of the movie was a colossal missed opportunity to make the most of a great reboot concept. We agree that it was one of this past Summer’s worst blockbuster disappointments, though we also agree that Fantastic Four was far worse. At least Terminator: Genisys has that going for it. It’s not Fantastic Four.

Keep hunting Eggplante for all news and updates on Terminator.