Alan Moore had best grab a beer, because it looks like some folks might be adapting his beloved graphic novel, Watchmen again, if a report from Collider is to be believed. Obviously, this is unverified, so take it with a grain of salt, but if this pans out, it’s a very interesting prospect indeed!

Apparently, DC Extended Universe godfather, Zack Snyder, who also directed 2009’s film adaptation of Watchmen, has been having meetings with HBO about potentially adapting Watchmen into a TV series in some form. Given that the premium adult network is talking to Snyder, it would also seem probable that said project will probably end up taking place in the same universe as his 2009 Watchmen movie.

The most likely suspect is that HBO wants to host a series, or perhaps miniseries, centering around prequel graphic novel, Before Watchmen, which was published in 2012. A less likely, but still possible speculation is that HBO may wish to design a sequel series of some kind to Watchmen. Then again, there’s also some possibility that HBO may wish to re-adapt Watchmen for the small screen, and may simply be talking to Snyder in a consultant capacity, since, after all, he adapted a graphic novel that was said to be, “Unfilmable” by most fans and pundits.

Watchmen was first published between 1986 and 1987 by DC Comics (though it exists outside of the DC Universe), written by Alan Moore, and illustrated by Dave Gibbons, though only Gibbons was credited in the 2009 film adaptation, since Moore refused a credit, on account of having a distaste for Hollywood after negative experiences with two movie adaptations of other graphic novels he wrote, From Hell and The League of Extraordinary Gentlemen. Taking place in an alternate-timeline 1985, Watchmen is about a second generation of costumed vigilantes, and a lone man who is given god-like abilities from a spectacular scientific accident, as they deal with increasing political unrest surrounding costumed vigilantes, in the wake of historical events such as the Vietnam War, and the ever-increasing nuclear paranoia of the time. The graphic novel is considered to be one of the best comic books ever written, though the movie received more mixed reception, despite more universal praise centering around the casting and visuals. 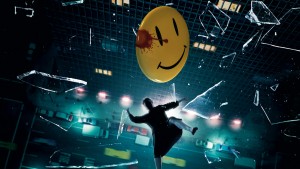 Would you, ahem, watch a Watchmen TV series? Would you prefer HBO adapted the main graphic novel again, or made an adaptation of Before Watchmen to add to the lore of Snyder’s 2009 film adaptation? Do you think that Hollywood and TV networks should just leave Watchmen alone from now on? As usual, your comments are welcome below.

Keep watching Eggplante for all news and updates on Watchmen, and how it may or may not be adapted to the small screen.