NOTE: Full spoilers for this episode of Fear the Walking Dead, including a major character death, are present in this review

Fear the Walking Dead recovered from its stumble last week with Season One finale, “The Good Man”, though not perfectly. While this was overall a satisfactory season finale that had a good share of excitement and drama, the show’s usual flaws aren’t totally fixed even here, including some of the sloppy writing.

As last week’s episode teased, Daniel does indeed spearhead a plan to release the Walkers that were chained up in the stadium, which Ofelia’s soldier beau told him about during his (pointless) torture sequence. As Cobalt is put into effect, Daniel walks up to a secure military base, with almost 2,000 Walkers at his back, which quickly begin to overwhelm the soldiers. So much for the exit strategy! At least the series is finally featuring a heavy count of Walkers for now though. It only took until the season finale! 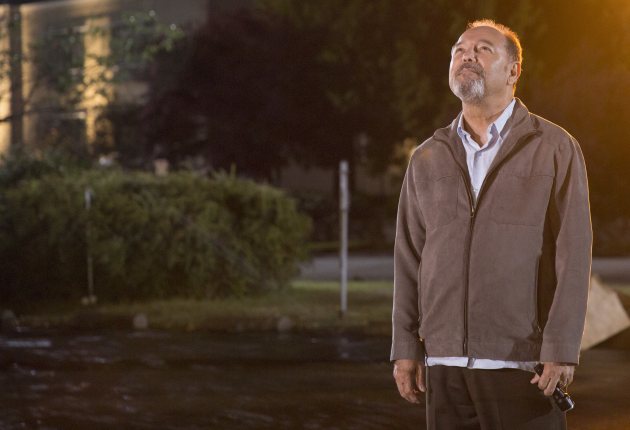 Meanwhile, Madison and Travis decide to take Ofelia with them, leaving Chris and Alicia behind with their escape vehicle. This proves to be for naught however, as a group of soldiers come along and torment Alicia, leading to Chris failing to pick a fight with them, and the soldiers taking off with the car. I’ve got to hand it to Chris, at least he’s more assertive than his wimpy father, and actually answered the call to action, though this was one of the moments that the season finale kind of botched. The soldiers taking the car presents no complications whatsoever, and when the operation is over and done with, the group just finds another car right away. So what was the point of Chris and Alicia during this finale? None whatsoever. This honestly just felt like a transparent way for the writers to get them out of the way during the main events, and that felt like a waste, especially when these two have so frequently proven to be benchwarmer characters that didn’t do much in most of Season One to begin with.

Speaking of transparent, there’s some truly chilling and brilliant scenes as the Walkers begin to overrun the military base, and the soldiers start to meet their grisly ends as a result. Unfortunately, for every standout Walker moment, there’s also a head-slapping one that the episode botches. A brutal and squeamish scene of a soldier getting bitten and having to tell his comrades was nicely dramatic and gory for example… But then Fear the Walking Dead went and ruined it by having the guy willingly run into a helicopter propeller and decapitate himself. Rather than be dramatic, this was unintentionally hilarious, since the guy did it with a loaded gun in his hand. What, were you too cool to just put a bullet in your head, buddy? This is the dumbest moment that the show has had since Chris talked on his cutting-edge smartphone while holding a rudimentary camcorder. Had the soldier just gone over and shot himself (or even better, had to turn and kneel as one of his comrades executed him), it would have achieved the desired effect. When you give him an OTT death like that for no reason though, it just looks idiotic, and it undermines the show’s efforts to be grounded and emotional.

Fortunately, the moments that soon followed with Nick and Strand were done far better. Nick proves himself by swiping the key from Strand temporarily, and the two hightail it out of the prison area of the compound, with Strand saying that Nick shouldn’t waste time freeing people he can’t save when he needs to save himself. Strand is clearly a dick, but he’s a charismatic dick, and this episode portrayed that well. Nicely accentuating the moment was Madison and Travis coming through after with Ofelia and Daniel, and freeing the people in the prison area just the same. Maybe they escaped. Maybe they all died. Who knows. Fear the Walking Dead left this nicely ambiguous, and that was cool.

But then, the show ruins this moment in the next scene, by having the soldier who swiped the cuff links from Strand calmly let a Walker munch on his innards. I don’t know if this is bad acting, bad directing, or both, but dude, you should be gurgling, screaming and/or passed out! Again, rather than be dramatic, as Strand leaves the guy to his fate with more Walkers pouring in, this moment came off as unintentionally hilarious, since the soldier’s reaction to being eaten by a Walker was barely acknowledged. When you’re being devoured by the living dead, ‘sleepy’ is not the emotion that you should be achieving while it’s happening! Otherwise, you’re doing your scene wrong.

On the bright side, this was followed up by another better scene, where Nick and Strand end up cornered at a sealed door, as Walkers start closing in on them. This is around the time that Madison, Travis, Daniel and Ofelia find Liza, who tries and fails to convince Dr. Exner to come along after she’s forced to euthanize all of her patients (Exner holding the gun and staring at it as the scene ended, and that’s the last we see of her, was also a great moment), and Liza uses a keycard to get Nick and Strand to safety. Strand then fully joins up with the other group, and they all make a tense escape, though not before Ofelia’s soldier beau comes and pulls a gun on Daniel.

This is the first of two climactic moments that was both good and bad. On the one hand, Travis’ good nature that led to him letting the soldier go, came back to haunt him in a great way, especially when he ignored Daniel’s warnings of what may happen if the guy wasn’t killed. The soldier attempts to kill Daniel, before nicking Ofelia with a bullet instead (quite intentionally, I might add!), and Travis tackles the guy and unloads on him, beating him to within an inch of his life. Madison actually has to try and calm Travis down, and this was a powerful, superb moment that finally had Travis’ pent-up aggression coming out in a great way.

On the other hand though, there was also something very wrong with this moment; Why the hell did Ofelia’s soldier boyfriend actively try and shoot her? Sure, maybe he was upset that Ofelia appeared complicit in her father’s scheme, and maybe he thought shooting Ofelia would hurt Daniel in some way, but when the soldier is established as genuinely caring about Ofelia, it doesn’t make sense for him to try and shoot her. He was established as a good soldier and a sensitive type, so him trying to shoot Ofelia dead was a moment that rang incredibly hollow, and stank of the show being desperate to create more pointless drama. Sure enough, Ofelia survives the gunshot wound, and the show moseys along as if nothing happened to her. What was the point of shooting Ofelia?! Ultimately, there was none.

The finale winds down with everyone temporarily staying at Strand’s waterfront property, restocking supplies, and preparing to make their next move. After some emotional talks, Liza goes outside and Madison follows her, where Liza reveals that she was bit during the chaos. Again, this leads to a climactic scene that is both good and bad in equal measure, especially after Liza tries to get Madison to kill her, and Travis has to be the one to do it, despite Liza claiming, “It would break him.” On the plus side, the scene was very well-handled, with Travis collapsing on the beach in despair as the gunshot rings out, with no one being certain of what was going on from the inside of the beach house, and Travis finding comfort with Madison as he must finally compromise his idea of what’s right. This was a great note to end the season on, especially after Travis has spent so much time being an aggressively, annoyingly useless character throughout the series so far.

On the other hand though, Liza being conveniently bitten off-screen was handled clumsily, and kind of felt like bullshit. When exactly was she bitten? When exactly was she that close to Walkers, and by herself, where she wouldn’t be noticed? I hate it when the main Walking Dead series does this too, having characters unrealistically act like they either don’t notice or don’t care about being bitten, just so the audience can be surprised later. Liza even directly states that she didn’t notice that her side was bitten to Madison. Bullshit! You would notice and scream if a zombie took a chunk of flesh out of you, and unless you were very much alone, other people would have heard it! Moreover, if Liza was bitten, she should have been hobbling, holding her side, or at the very least moving very slowly, but nope, Fear the Walking Dead had to shoehorn this clumsy surprise in, regardless of how little sense it made. True, Elizabeth Rodriguez was unlikely to continue on with the series for the larger season, since she’s part of the ensemble cast of Orange is the New Black, and no doubt has commitments there already, so some may have expected that Liza would be the one to die out of the leads, if anyone. Still, even if Liza’s actual death was handled well, her being bitten was definitely contrived and clumsy.

Thus, we’re left with a season finale for Fear the Walking Dead that is good enough, but still heavily in the shadow of the main series, which has even been shakier itself lately. Frankly, this spin-off still hasn’t completely justified its existence by the end of Season One, and so much of the great ideas that this show set out with just weren’t handled that well. The military presence was ultimately moot, since Madison and Travis just ended up fleeing L.A. with their families and the surviving Salazar family like they planned to do in the first place (making episodes 4 and 5, and even some of this one, feel largely pointless), and the show still ultimately feels like it’s not going anywhere that essential or interesting, or anywhere where audiences couldn’t fill in the blanks already. Moreover, the cast of this spin-off is still definitely weaker than the cast of the main series, with Daniel and Strand being the only standouts so far. Everyone else is either too boring, too annoying, or too unlikable.

Since AMC gave Fear the Walking Dead an automatic two-season pick-up, we’ll at least have a bigger, and hopefully better season to look forward to next year. For now though, Fear the Walking Dead at least capped off its first season on a solid note, even if it’s still got a long way to go before it catches up to the appeal of the main series.

Fear the Walking Dead 1.6: "The Good Man" Review
Fear the Walking Dead had a mostly good Season One finale, only sometimes dragged down by the series' usual shaky writing, some botched dramatic scenes, and the aftertaste of the whole military intervention in L.A. ultimately going nowhere, beyond leading to some lead character deaths.
THE GOOD STUFF
THE NOT-SO-GOOD STUFF
2015-10-05
78%Overall Score
Reader Rating: (0 Votes)
0%