After the very short term served by Captain Seth Dozerman for the Season Three premiere last week, this week’s episode, “The Funeral”, appropriately dealt with the fallout that ultimately ended with The Vulture becoming the Nine-Nine’s new captain. With the precinct preparing to attend Dozerman’s funeral, The Vulture wastes no time making the precinct worse than ever, as promised. Fortunately, this didn’t apply to audience amusement, with Brooklyn Nine-Nine delivering another funny and well-executed batch of cop hijinx.

After the season premiere displayed some difficulty in aligning the new character dynamics just right, “The Funeral” generally felt like a better balance between old and new, particularly when we don’t even see the PR offices this week, and Holt and Gina simply attend the Nine-Nine as if they never left, after Holt is entrusted to give a speech at Dozerman’s wake. Seeing some of Holt’s and Gina’s reactions to how business appears to be proceeding as normal led to some decent humour, and the cocky antagonizing of The Vulture to Holt should hopefully lead to The Vulture getting some hardcore Holt justice when Holt inevitably resumes his post as precinct captain some time later.

The episode’s jokes kicked into higher gear when the precinct hatches a plan to try and make The Vulture less of a villain by Peralta befriending him, though The Vulture learns of this when the group is accidentally recorded by Scully, who butt-dialed The Vulture and still hasn’t hung up. I have to admit, this was far funnier than Peralta simply suggesting that The Vulture bugged the briefing room, even though I wouldn’t put that past him either. Regardless, The Vulture threatens to demote Peralta to being a beat cop if he doesn’t break up with Santiago, blaming Santiago for Peralta’s bad behaviour. Yeah, that’s definitely not allowed in the real world, though this does lead to a good plot with Peralta and Santiago later. Besides, this is a goofy sitcom, so if it leads somewhere funny, maybe we can let the lack of realism behind The Vulture’s douche-ness slide. After all, he’s pretty much been the most inexplicably employed cop in television history since Season One, so I guess that’s consistent.

Things only get funnier when the funeral for Dozerman actually kicks off. Peralta and Santiago decide to get back at The Vulture by recording his threat to Peralta, then playing it for The Vulture’s superior, in an effort to get him fired. It’s cold, but then again, the guy does deserve it, especially if he’s blatantly doing something illegal while working in a high-ranking position of law enforcement. Anyway, Peralta continually trying to record The Vulture on his phone while a bagpipe player rehearses and keeps obscuring The Vulture’s words was very funny, as was Peralta trying and failing to play the bagpipes when he starts annoying the guy to try and get him to leave. Fortunately, Santiago manages to get the recording, and the two end up talking their way to the close friends and family section, encountering Dozerman’s wife. Peralta’s quick-thinking allows him to pass himself off as a fishing buddy of Dozerman’s in a very clever way, though Dozerman’s wife going on to yell at him over a prostitute problem was a hilarious curveball. It was even more hilarious when Peralta simply comes clean, then his wife instead yells at him over killing her husband.

This is when Brooklyn Nine-Nine really shines, when it finds clever ways to subvert your expectations as to how a joke is going to go. Even then though, when the delivery makes sense, it feels very satisfying, like when Dozerman’s wife inevitably didn’t forget how her husband died, even if Peralta did. 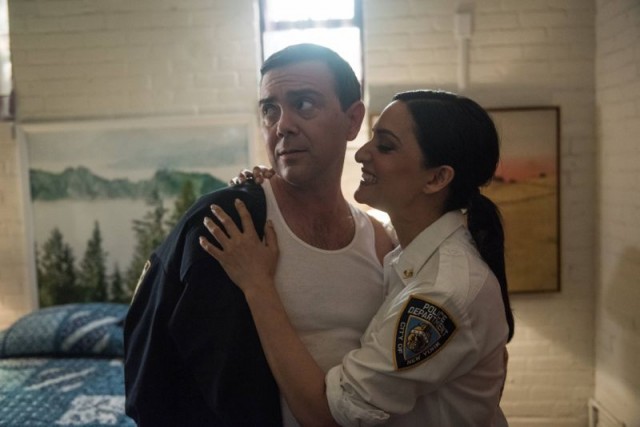 Still, the two sadly don’t manage to get the recording to its destination, and The Vulture walks off with Santiago’s phone, demoting Peralta on the spot. This leads to another annoying bit of Santiago doubting her relationship with Peralta again (oh come on, enough with this already!), though fortunately, it doesn’t last long, after Peralta makes a romantic speech to Santiago (in which he amusingly talks about her like she’s his dead boss), and not only does he alleviate Santiago’s doubts, but he inspires Holt to give The Vulture a chance to put his face on the NYPD website, in exchange for allowing Peralta and Santiago to date, and keeping Peralta as a detective. Victory! Leave it to Holt to save the day, even from the PR department.

Speaking of Holt, his subplot was arguably the best this week. After Holt quickly falls into despair from his ineffectual PR department, and the Nine-Nine appearing to move on without him, he begins drinking, and Jeffords soon ends up drinking with him. The two share a heartfelt bonding moment, with Jeffords saying that Holt needs to come back to the Nine-Nine, and the precinct is awful without him, and this then leads to Jeffords helping Holt to hilariously write a godawful speech, as both are very drunk by that point, and this leads to probably the first godawful speech that Holt has ever delivered in his life. At least Peralta managed to salvage that situation to everyone’s benefit. 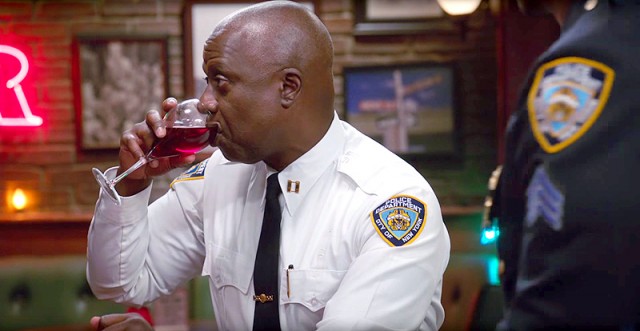 There were also two other subplots, though one was mostly deleted from the episode’s final cut, that being Scully’s wife announcing that she’s leaving him. This is simply played off as a passing joke (and admittedly, a solid one) in the final episode that aired, though it was meant to be a larger story with Scully and Hitchcock, the latter of whom isn’t even really seen again this week. Scully and Hitchcock were also pretty well entirely absent from last week’s season premiere, so it seems like their storylines are getting cut out, due to so much going on with the other characters. That’s a shame, but it is understandable, since Scully and Hitchcock are purely meant to be gag characters.

The other subplot belonged to Boyle, and was also a pretty decent one, though it felt like it didn’t go anywhere of note. Apparently, Boyle hooks up with another colleague that he never sees outside of department functions, and knows nothing about, not even her name. Gina and Diaz tell Boyle that he’s being gross (even if this is established to be against Diaz’s character’s beliefs from Season One. Maybe Marcus softened her? Actually, where the hell is Marcus?), and that he shouldn’t keep this up at Dozerman’s funeral. Fortunately, the latest quick peek into Boyle’s sexual dysfunction was funny, and Boyle vowing to stop hooking up with the woman when he learns that she is a vegan felt hilariously fitting. His renewed desire to just go back to being an emotional head case when it comes to seeking relationships however felt a bit lazy, and like the show is poising to go backwards with his character this season. Hopefully, that doesn’t end up being the case. 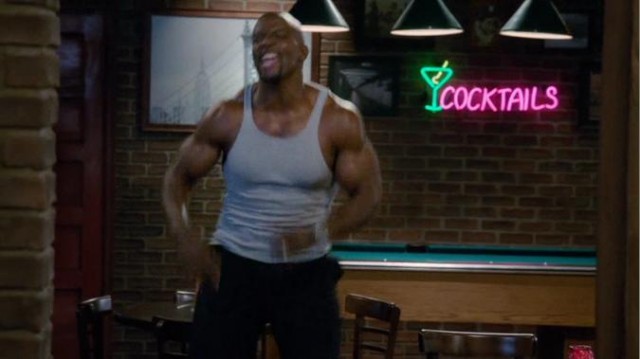 “The Funeral” was a funny and overall satisfying episode of Brooklyn Nine-Nine, even if the Boyle subplot felt a little bit like background gags, and The Vulture’s big threats to Peralta didn’t ultimately stick. It was great to see Holt and Gina interacting with the Nine-Nine again though, even in their new PR roles, and the Holt/Jeffords subplot was absolute comedy gold. Hopefully, the precinct can return the favour for Holt’s save next week, likely leading to more outstanding comedic possibilities.

Brooklyn Nine-Nine 3.2: "The Funeral" Review
Brooklyn Nine-Nine delivered some hilarious fallout to the loss of Seth Dozerman last week, with Peralta immediately butting heads with The Vulture, and Holt sinking into a potent depression as Boyle continues to have the world's grossest sex life.
THE GOOD STUFF
THE NOT-SO-GOOD STUFF
2015-10-05
82%Overall Score
Reader Rating: (1 Vote)
26%