After somewhat finding a better groove in its third episode last week, Heroes Reborn kept most of that momentum for “The Needs of the Many”, though it did also add a couple of stumbles, thanks to an inferior storyline for many characters in contrast to last week.

Inevitably, Tommy and his mother survive the car accident, which is blamed on a drunk driver. If that’s true, that’s a bit contrived, but whatever. Tommy uses his abilities to get his mother to the hospital, but it turns out that she needs blood, and Tommy is not a match to his mother’s O-negative blood, which the hospital conveniently doesn’t have. Emily happens to arrive at the same time (with Brad coming and then going, for whatever reason), and Tommy brings her to grab blood from a nearby warehouse, which Tommy somehow gets to without issue, despite never having been there. Didn’t they establish that Tommy needs to think of a location to warp there? How did he warp somewhere that he hasn’t been before? 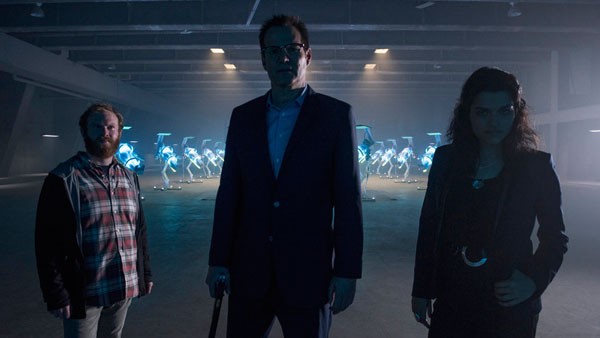 Well, regardless, Tommy gets the blood and it looks like his mother will be fine, though it inevitably comes out that he’s an Evo, and he ends up being cornered by what appear to be Renautas agents. Uh oh. Tommy’s arc then ends with the agents threatening his mother’s safety if Tommy doesn’t come with them. Oh dear. Still, at least Tommy remains one of the show’s better characters, particularly in his selflessness when it came to sticking his neck out to save a life.

Catching up with Luke and Joanne, it might not surprise you to see that Joanne especially continues to get worse with every episode. In fact, this episode delivered a moment that would be hilarious, were it not for its facepalm-worthy stupidity, where Joanne simply opens a door, shoots the owner of the house dead right in plain view of the outside, celebrates her cowardly murder of an innocent man (classy), and then she and Luke walk around, touching everything, leaving boot prints and fingerprints all over the place, and incriminating themselves in every conceivable way. I know I sound like a broken record, but it really must be stressed once again; HOW HAVE THESE IDIOTS NOT BEEN ARRESTED?!?!?!?! This is their least subtle killing yet! They didn’t even bother to torch the house this time. They just walked out, leaving prints and DNA everywhere for the cops to find! These two might as well have walked directly into a police station and tried to shoot the receptionist, considering how careless they were with their latest step in their idiotic rampage. Seriously, this story arc is awful, and it is dragging down the entirety of Heroes Reborn, and that’s doubly true of Joanne! The sooner it finishes, the better.

Well, good news on that front. Luke comes clean about his Evo abilities to Joanne this episode, who nearly shoots Luke dead in the car immediately upon finding out. Wife and mother of the year, everyone. Joanne then huffs off and abandons Luke in their car, and we’re supposed to feel bad, but we don’t. There’s no way that we can. I’m calling it. These two are the worst characters in the history of Heroes. Heroes had some doozy characters past Season One, but Luke and Joanne are a new low in stupidity for this canon. The show so desperately wants us to feel sorry for Luke, but it just doesn’t work, because his character has been so inconsistent, hypocritical and spineless. Likewise, the show wants us to feel something when Joanne walks off, but you’ll just want her to get pancaked by a speeding mack truck, because she’s written so horribly, and is more or less a cartoon psychopath at this point. If Heroes Reborn thinks it can redeem these two in any way, it’s wrong. The sooner they’re killed off, the better. 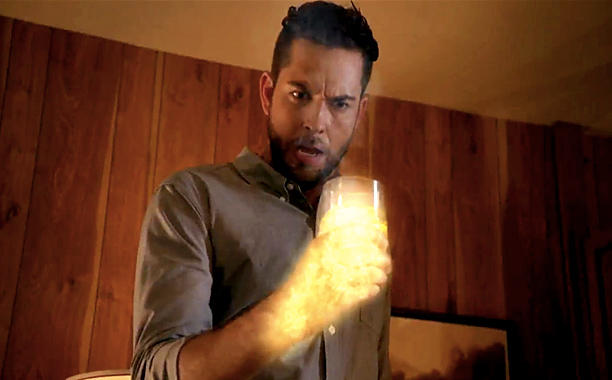 Anyway, Carlos’ arc didn’t feel that interesting this week, even when it looked like it was going somewhere better last week. His nephew discovers that his father was El Vengador, and both the nephew and Carlos’ father are captured by the apparently evil Evo-hunting cop, Captain Dearing. That’s about all that happens on Carlos’ end this week, beyond Carlos touching up the El Vengador costume, and never wearing it. Likewise, Ren and Miko travel to the U.S. to try and find Miko’s captured father, and do so with the help of some cosplay/Evernow enthusiasts, and… Not much of value was accomplished, beyond a whole lot more confusion. If Luke and Joanne are infuriatingly irredeemable and stupid, Ren and Miko, and their place in the larger story, are infuriatingly confusing and weird. I assume that future episodes will better tie Ren and Miko into the larger storyline, but for now, they still too often feel like they belong in an entirely different show, and don’t fit in with the rest of the Heroes universe. Moreover, their motivations feel muddled. I get Miko wanting to rescue her father, but why exactly is Ren still around? Is he just perving on Miko at this point?

Anyway, Malina’s place is also a little confusing for now, since the show says that she’s the saviour of the world, yet it doesn’t seem clear why, even now. She continues to wander around the Arctic Circle with her ‘boss’, I guess, then gets to Northern Canada (did they just walk there on foot?), and we learn that Malina’s power apparently allows her to create and instantly grow trees. I thought her power had something to do with containing the Aurora Borealis? Is she a light controller that can somehow manipulate plant growth through photosynthesis? The show isn’t explaining her abilities very well for now. Oh well, whatever. In any case, she’s the one that delivers this week’s cliffhanger, since, after she’s located by Renautas, Harris Prime is sent after her, and told to bring, ‘The Shadow’, who just so happens to be Quentin’s darkness-manipulating sister, Phoebe. The episode could have done a better job of making this clear, if you didn’t see the webseries that helped set up Phoebe, as many viewers no doubt didn’t, but to be fair, Quentin did mention that his sister was taken in the second episode of the miniseries, and could control darkness. The identifier was there even in the main miniseries, though a gentle reminder of The Shadow’s identity for less devout viewers wouldn’t have gone amiss.

The most exciting events of the episode centered on Renautas, naturally, with Noah and Quentin successfully taking Taylor hostage, and learning the horrible truth, or at least the next piece of it, about Renautas’ plans for Evos. After escaping a trio of Harris clones, and using Taylor’s credentials to get into the Renautas building, the three witness a whole bunch of captured Evos in a sort of stasis machine, with Taylor breaking down and emotionally telling Noah that she had no idea what her mother was actually up to. Taylor’s anguish appears to be genuine, and it’s definitely the most vulnerable that we’ve seen her character yet. Taylor at first appeared to be wholly on her mother’s side, though perhaps she’ll end up being another ally for Noah and Quentin now. We’ll have to see. 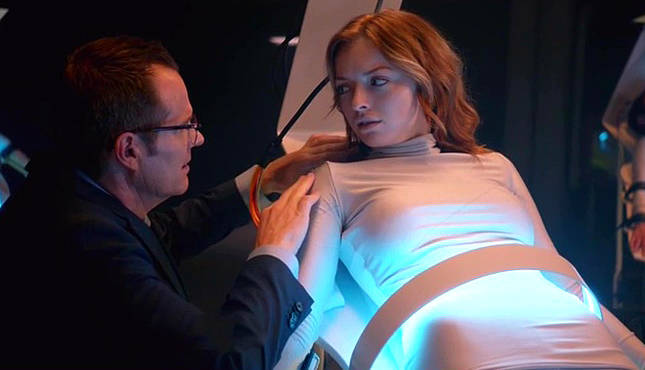 Molly Walker is one of the captured Evo’s in stasis, though is conscious for some convenient reason. Why? Anyway, Molly laments to Noah that people only ever want to use her for her power, ever since childhood, and when she gets ahold of Noah’s gun, she shoots herself in the head, prompting Noah and co. to hightail it out of the building. Yep, Molly Walker is the latest casualty out of returning Heroes personalities (even if she was recast in this case), which Heroes Reborn seems to be axing off with alarming regularity. Honestly though, in this case, this probably works to the miniseries’ benefit. The ‘new’ Molly never made sense to begin with, and the idea of yet another evil corporation using her powers for evil ends felt like a re-tread of former Heroes storylines.

This leaves “The Needs of the Many” as being a decent episode that fell back into some old, frustrating storytelling habits, even with the miniseries appearing to take some good steps forward with last week’s episode. Several arcs definitely felt better than others this week, with the good arcs staying good (Noah and Quentin) and the bad arcs staying bad (Luke and Joanne). Hopefully next week has the trailing arcs like Carlos and Ren/Miko picking up a bit more slack.

Heroes Reborn Episode 4: "The Needs of the Many" Review
Heroes Reborn stayed largely decent this week, keeping its better arcs moving nicely, though its bad arcs are still dragging down the miniseries, and this episode overall slipped back into some of its annoying storytelling habits from the weaker premiere episodes.
THE GOOD STUFF
THE NOT-SO-GOOD STUFF
2015-10-09
72%Overall Score
Reader Rating: (0 Votes)
0%