NOTE: Spoilers from throughout the first season of Fear the Walking Dead are present in this review

Fear the Walking Dead just straight up didn’t live up to its promise in Season One. Does that make it a bad show? Not necessarily. It just means that the series is bogged down by too many distractions and too much of a dogged pace to really make a noteworthy impression at this point. Sadly, if you were afraid of Fear the Walking Dead standing well in the shadow of the main The Walking Dead series, your fears are quite founded. This initial helping of six episodes, while not bad by any means, is undeniably weak and disappointing for the most part.

One of the biggest issues on this note is the fact that the new cast isn’t nearly as compelling as the cast of the main The Walking Dead series, despite Fear the Walking Dead wanting them to be a more grounded and tight-knit family of survivors. There’s exceptions of course. Ruben Blades’ Daniel Salazar, an uncompromising survivor and political refugee from El Salvador, is a highlight character for example, due to his dark secrets, and closer proximity to actually making realistic decisions, given his situation. Sure, even Daniel makes some dumb decisions in Season One, such as thinking he can just torture and murder a U.S. Army soldier with no consequences in an enclosed quarantine zone, but at least his character is providing good storylines more often than not.

Another good new character was Strand, a charismatic broker-type character, whom we meet later on in the season. Strand is at least entertaining, and helps to add some much-needed levity to the otherwise suffocating atmosphere of dread throughout Fear the Walking Dead, but so far, we haven’t seen enough of him. He mainly feels like a way to set the ground work for Season Two, but that’s fine, since it should hopefully mean that Season Two improves the quality of the series, however slightly.

Sadly, the Clark family, the center of the new character dynamics, didn’t really come into their own in Season One. Matriarch, Madison Clark showed some early promise about midway through the season, but towards the end, she just became too bland and forgettable, which is how she started the series as well. Likewise, Madison’s children also range from bland to downright unlikable. Having a junky character like Madison’s son, Nick Clark is an inspired idea for example, but so far, Nick has virtually no redeeming qualities. He has no desire to better his life, or survive, or do much of anything. He’s just a spoiled, shiftless prick who is only around to cause trouble.

At least Nick has an arc though, even if it’s not a good one. Alicia, on the other side of things, is portrayed to be a noble, intelligent child, at first, but then the show just doesn’t seem to know what to do with her, shifting her personality virtually at random, after the Walker epidemic begins. She stinks of being a benchwarmer character who clearly has nothing to do but take up space in Season One, and despite having a slight romantic arc with Madison’s fiancé’s son, Chris (another benchwarmer character who doesn’t end up doing much in Season One), this goes nowhere for now. It’s another thing that you just have to hope turns out some kind of good storyline in Season Two.

As bad as the Clark brood is though, Madison’s fiancé, Travis Manawa is among the show’s most infuriating leads so far. Travis is aggressively useless for almost the entire season, raising objections left and right, but failing to actually get anything done. He comes off as an annoying wimp very quickly, and it’s not until the season finale that he’s actually forced to make hard decisions, and his emotional reaction and fallout feels sympathetic, and makes sense. At that point though, it’s too little, too late, and you’re yet again hoping that Season Two makes better use of Travis’ character. For now though, the fact that audiences already know that the Walker Apocalypse is coming and absolute, means that we already know that Travis and his pacifism is wrong, which completely sucks any drama out of him trying to appeal to humanity. We already know that he’s wasting his time with those pleas, and that’s a predictable downside to making a prequel spin-off like Fear the Walking Dead.

At the very least however, Travis’ ex-wife, Liza Ortiz is a better character, who feels like one of the more realistic and relatable characters on the series at this point. That’s why it sucks that the season ended with Liza getting bitten off-screen, and having to be shot by Travis. This may have been a predictable outcome to a point, since Liza’s actress, Elizabeth Rodriguez, already has a principal role on popular Netflix series, Orange is the New Black, and no doubt couldn’t stick around for the extended episode run of Season Two, but it’s disappointing nonetheless, since Liza actually did inject a sense of tough family love that the show needs, and billed itself upon. Without her, we have to hope that the other characters become more interesting, now that Season One has concluded with Los Angeles officially falling to the Walker Virus.

Speaking of the fall of Los Angeles, that was another thing that was very unevenly portrayed. There were some striking and nicely tense scenes, with rioting citizens and widespread destruction, but the show couldn’t seem to decide whether Los Angeles falling apart was sudden or gradual, and it seemed to make up the actual collapse of society as it went along, rather than having a good, pre-determined plan with smooth, consistent pacing. The timeline of events was just kind of bizarre, especially since the back half of the season had the military occupying the Clark family’s neighbourhood, only to plan to retreat and abandon everyone for… Some reason that the show didn’t do a great job of explaining. That was one of many reasons why the penultimate episode of the season, “Cobalt” was sadly its biggest stinker. Hopefully the fact that “Cobalt” was this show’s working title isn’t a bad omen for the future, in that case.

Even with an improved and more exciting season finale however, one that finally had a good count of Walkers showing up on a Walking Dead spin-off series that’s been strangely lacking Walkers between the pilot and the season finale, Fear the Walking Dead never managed to deliver a story that was even half as compelling as the better stories of the main The Walking Dead series. Some key dramatic moments were botched, becoming unintentionally funny at worst, and the military occupation didn’t really accomplish anything in the end, beyond finding contrived excuses to kill off Liza, and Daniel’s wife, Griselda, along with adding Strand to the mix (who could have been introduced somewhere better), since the Clark family ended up fleeing town in their car with Daniel and Ofelia (and now Strand) anyway, as they originally planned to do before the military showed up.

Where Fear the Walking Dead was definitely at its best in its first season was in its third episode, “The Dog.” This was an episode that finally started to tap on the spin-off’s potential, presenting a good and realistic family dynamic, with the Clark family trying to make the best of a bad situation, and act as a real family would if Walkers came a-knockin’, and knock they did, as a gruesome Walker home invasion and a debate about euthanizing a Walker-ised neighbour kept the horror elements going strong. Disappointingly, this was the only episode of its kind in all of the first season’s six-episode count, and it shows that, even with its many flaws coming out of Season One, Fear the Walking Dead still has a lot of potential, especially since it is at least doing a good job of separating itself firmly from the main The Walking Dead series. 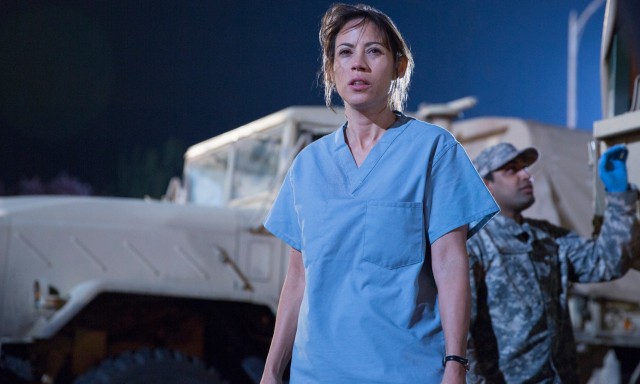 Fear the Walking Dead may one day come into its own, and confidently stand alongside the main The Walking Dead series, but for now, it’s still got a lot of catching up to do. Hopefully, the series gains a little more ground in Season Two next year.

Fear the Walking Dead: Season One Review
Fear the Walking Dead's first season is acceptable, but ultimately disappointing, having some good moments and characters, but stumbling too often on half-baked plots that go nowhere, dull pacing, and a cast that just can't keep up with the appeal of the main series' personalities.
THE GOOD STUFF
THE NOT-SO-GOOD STUFF
2015-10-11
70%Overall Score
Reader Rating: (0 Votes)
0%