After a string of great Season Nine episodes so far, “The Perspiration Implementation” felt like a bit of a stumble. The episode still had enough decent jokes to get by, but, despite the show’s valiant effort to keep getting back in touch with its nerd humour roots, it fell back way too much on old, tired geek stereotypes with both of its major plots.

The main plot of the episode involves the group deciding that they want to take up an athletic hobby, so they all agree on fencing. Turns out that Caltech’s fencing club is headed by none other than their frequent rival, Barry Kripke, who is strangely amicable this episode. I wonder why that is. 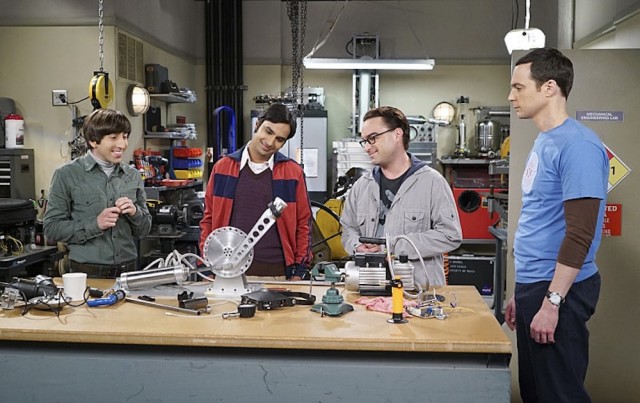 In any case, Kripke teaches the group how to fence, which naturally unfolds with them living out their fantasies of Game of Thrones and The Princess Bride. Admittedly, these jokes were pretty amusing, particularly as the gang screwed around in the background while Barry took a phone call, before resuming perfectly disciplined positions by the time Kripke turned back around. It was a bit silly, but it was nice that the show continues to relax and let loose a bit, particularly when it’s still effectively capitalizing on a gloomy split between Sheldon and Amy.

The following sequence was also pretty good, with the guys attending a sports bar, and Sheldon deciding that he needs to try to date other women. This goes about as well as you would think. When he recounts the affair to Amy however, you can see visible discomfort, as if she never truly expected Sheldon to move on, particularly when it’s revealed that Kripke asked out Amy, upon Sheldon blurting out that they’d split during fencing, though Amy surprisingly rejects him. Ok, maybe not totally surprisingly. Kripke probably shouldn’t have led off with texting nude photos. At least it gave the girls a good laugh though!

Fundamentally, the whole fencing plot with Kripke was serviceable, but the reason why it sometimes floundered is because it kept lingering on the whole tired stereotype of nerds being bad at sports. Sure, none of the male leads of The Big Bang Theory are visibly athletic, but some of their levels of ineptitude felt a bit exaggerated, and may bug geeky types who actually are accomplished athletes. Adding insult to injury were more jokes that showed the guys being weak and frail, even at fencing. It sort of paints all nerds with a wide brush of unflattering and inaccurate representation, and it might have made more sense if this plot focused more on at least one of the guys possibly being naturally good at fencing, likely Sheldon, who could have more actively challenged Kripke for Amy’s affections. That still would have been funny, and would have allowed the episode to maintain its better jokes without compromise.

Regardless, the women had a subplot with Stuart this week, who brings them into the comic book shop, and asks them how he can bring more women into the store, now that comic books have more female readers than they ever have. This also led to some mostly solid humour, especially when Stuart inevitably becomes awkward and creepy, as he is wont to do. This is even true of Bernadette, which is surprising, since you’d think that living at the Wolowitz house for so long would have at least desensitized Stuart to Bernadette.

Surprise though, Stuart is the reason why women are put off, because he’s a creep and is very awkward around them, and he doesn’t seem to understand the ramifications of having a breastfeeding area, or a breastfeeding camera. Some of the online reviews by women entering Stuart’s comic book shop were funny, but again, after a while, the joke did get strained a tad. It also painted Stuart as far too much of a creep. Yes, Stuart is a sad sack, but he’s not as likable or appealing when he starts getting creepy, especially since, again, this may poke at uncomfortable stereotypes of nerds all being socially awkward and bad with their preferred sex, which isn’t true.

It seems like even the writers threw up their hands at the Stuart plot this week as well, which was great in concept, but they clearly had no exit strategy for it. So, they just abandon it. The episode never really resolves Stuart’s issue, nor does it really improve his character at all. At worst, his arc just ate up runtime, and gave the women something to do while the guys were all at fencing. There were a satisfactory amount of good jokes in the Stuart plot, but it ultimately amounted to a whole lot of nothing, and that’s disappointing. 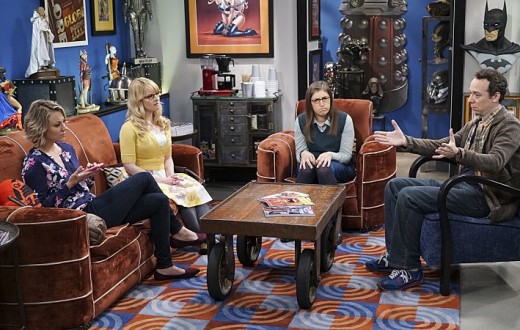 “The Perspiration Implementation” undeniably felt like a filler episode for The Big Bang Theory this week. Those are inevitable here and there, especially in Season Nine, and at least the jokes were good enough to carry the episode. Still, the main plot felt more uninspired than it should have, and the subplot didn’t ultimately get resolved. The laughs still came, on the bright side, but they weren’t as frequent or large as they were in some of this season’s previous episodes so far.

But hey, at least Kripke was kind of nice this week!… Barring the whole nude photos to Amy thing. He probably should have quit while he was ahead there.

The Big Bang Theory 9.5: "The Perspiration Implementation" Review
The Big Bang Theory stumbled a bit this week, delivering a decent amount of laughs between its main plot and subplot, though its nerd humour relied too much on awkward stereotypes, and the subplot especially never got a proper sense of resolution.
THE GOOD STUFF
THE NOT-SO-GOOD STUFF
2015-10-20
72%Overall Score
Reader Rating: (1 Vote)
70%