Kingsman: The Secret Service proved to be an early surprise hit for 20th Century Fox this year, grossing a strong $128 million in North America, and raking in an especially hefty $285 million in international territories, leading to a very healthy $413 million gross worldwide, which is quite lucrative for a February movie! This is also considering that the movie was paired up with the more widely-known and publicized release of Universal’s high-grossing romance novel adaptation, Fifty Shades of Grey on the same date, so its success is no small feat, and was no doubt carried by the highly positive reviews and word-of-mouth that the movie generated after release. 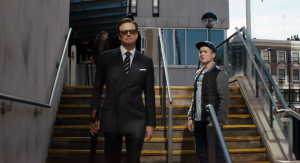 The success of the movie wasn’t lost on Fox either, as they quickly began pre-production on a sequel, to the point where they even bumped other planned movie releases in their upcoming portfolio to fast-track it. Now, we know when to expect that sequel, as Kingsman 2, which it’s tentatively known as for now, has booked a June 16th, 2017 release date! This proves that Fox is clearly very confident in the sequel pitch, whatever it may be, as the likely R-rated movie is now getting upgraded real estate as a big Summer blockbuster release, and is facing off with Pixar’s family-friendly guaranteed cash cow movie, Cars 3 on that date to boot. This date also places it a mere week before another big comic book movie, Warner Bros. and DC Entertainment’s Wonder Woman, is scheduled to make its debut as well.

Taron Egerton is reported to be reprising the role of protagonist, Eggsy for the sequel, though the involvement of the other cast members is currently up in the air. It’s also reported that the studio is working out a way for Colin Firth to return, though if you’ve seen the original movie, you might know that this could be an uphill battle. Beyond that, any potential cast and plot details for Kingsman 2 are currently unknown.

Kingsman: The Secret Service was adapted from the graphic novel, The Secret Service, written by Mark Millar (Kick-Ass), illustrated by Dave Gibbons (Watchmen), and published under Marvel Comics’ Icon imprint. The movie is a fairly loose adaptation of the comic, only maintaining some characters and a handful of story elements from the source material, though its tone and style are similar, channeling classic spy thrillers like 007 and Mission: Impossible in a satirical, exaggerated light. The movie and graphic novel have both been compared heavily to Millar’s other well-known Icon graphic novel and subsequent movie adaptation, Kick-Ass, which satirizes superhero movies in the manner that The Secret Service and its film adaptation satirize spy movies.

We were among many reviewers and moviegoers that were quite pleased with Kingsman: The Secret Service earlier this year, awarding it a glowing 93% score in our review of the movie, and declaring it the first truly amazing movie of 2015. We highly praised the action sequences, sense of humour, appealing characters, and clever satirizing of spy movies, and still consider Kingsman: The Secret Service to be one of 2015’s best comic book movies, if not its very best.

Kingsman: The Secret Service is now available for home rental and purchase, both digitally, and on DVD and Blu-Ray.

Keep sneaking to Eggplante for all news and updates on the Kingsman movies.