After a minor stumble with last week’s slightly flimsy episode, iZombie righted itself nicely with “Real Dead Housewife of Seattle”, which restored the show’s outstanding balance of humour, drama and mystery with aplomb.

This week’s murder victim is the trophy wife of a wealthy corporate tycoon, who just so happens to sit on the board at Max Rager Corporation, as we find out later. After a man posing as a realtor visits the wife at home, and gets in by offering a bunch of money for the property, the guy attempts to kill her, though in the struggle, both of them tumble off the edge of a balcony, leading to the would-be assassin in a coma, and the wife being killed on impact. This sets up a strong mystery, as someone is clearly after something related to the wife’s rich and powerful husband, who is so busy and influential that even Babineaux has trouble getting a simple interview with him, and even then, the guy’s lawyer is planted beside him, constantly feeding him slimy information on how to dodge police inquiries. 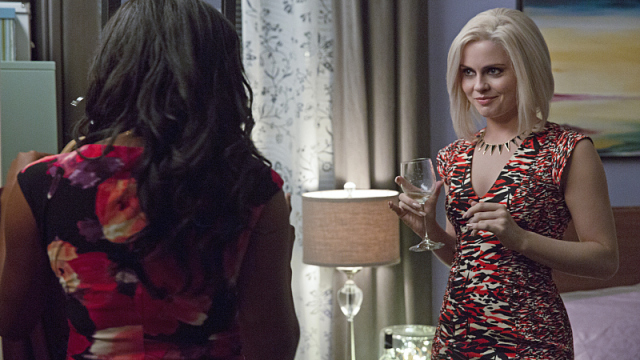 Of course, before all that occurs, Liv naturally has to eat the brain of her latest murder victim, and fortunately, the jokes that resulted from this were far better than some of the more uneven frat boy humour from last week. The jokes were given a more delicate and realistic touch, as Liv becomes posh and vain, though not to the point of being a complete airhead, mercifully. This led to some laugh-out-loud greatness, as Liv continually shows up to work in very over-ambitious outfits, and routinely gets distracted by suspects’ clothes and apparel during police interviews. It just goes to show that more smart and balanced humour on this series tends to work better than humour that is just trying too hard to reinforce a goofy stereotype.

The mystery was also far better this week, given that Season Two of iZombie has had two weaker case-of-the-week offerings sustaining it so far. Finally, we got a case that was worthy of this series’ high pedigree, having both a lot of good twists in it, and a satisfying final result, complete with a good bonus of tying everything into the continued dirty dealings of Max Rager. Even with Blaine entirely absent this week, the episode stood tall, and effectively showed that Blaine is not the only villain taking advantage of Seattle’s zombie problem.

On that note, when the investigation takes Liv and Babineaux to Max Rager, Liv finally confronts Major red-handed in the building, seeing that he’s now on Max Rager’s payroll. Major claims that he’s nothing more than a trainer, but Liv’s latest brain and its love of drama results in her slapping him, and despite her attempts at apologies, Major is simply left to walk off. Oh, and apparently Major is screwing Liv’s mole of a roommate, who is heavily implied to be the daughter of the Max Rager boss, Vaughn du Clark. Neither development is particularly surprising, though the show handled both very well, especially after a steamy lead-in to the Major/Gilda hook-up reveal.

All the while, Liv befriends the stylist of the lead suspect, Bethany, though you may be able to infer that this won’t last. Naturally, Bethany is the real culprit behind the wife’s murder, which is discovered after a hilariously failed attempt to interrogate her friends, both of whom just hilariously gossip about each other, and give no useful info to the case. Apparently, Bethany, who is using the name as her latest alias, is a professional gold digger who takes advantage of rich men on an Ashley Madison-style dating site for cheating spouses, then steals their money. She wanted to kill the wife of her latest victim to push this vendetta, using her charms to enlist a petty thief into becoming a bumbling contract killer, allowing her to marry the husband, get ahold of his assets, and leave no one any the wiser. Like I said, it was actually a good resolution, especially since it led to a pretty poignant scene for Liv afterward, as the show smartly reveals that this day is Liv’s birthday, and nobody noticed. This ties into a seemingly innocuous request at the start of the episode, where Liv asks Ravi and Babineaux if they’ll have a meal with her on Friday, which they decline, and the payoff for this was actually very emotional and well-done.

What was equally well-done however was the long-awaited return of Peyton, who comes back on to the scene as assistant D.A., just in time for the D.A. (who we know is in Blaine’s pocket) to initiate a city-wide crackdown on Utopium, also coming just in time for Major’s Utopium addiction. Peyton’s heartfelt reunion with Ravi was another standout scene, as was Liv finding a birthday cake for her from Peyton in the fridge, right as she prepared to simply get drunk and wallow in loneliness for the night. iZombie was filled with satisfying moments like this in Season One, but only now has Season Two managed to effectively replicate them to this degree. It’s good to have Peyton back, I must say, especially when the episode delivered her comeback so effectively.

Also delivered effectively, as I said, was the case-of-the-week tying well into the Max Rager dealings. The husband of the victim starts to spearhead a hostile takeover of the company from Vaughn, after learning that Vaughn was screwing his wife, which Liv has the misfortune of confirming in a brain vision. Hypocrisy of that move aside, Vaughn takes the man into a top secret bottom floor laboratory, then feeds him to a fully-zombified researcher as things end for the week, with blood splatters and a weakly reaching hand left to close out the episode. It was actually a pretty squeamish scene, considering iZombie’s frequently light-hearted tone, but one that was still done incredibly well!

iZombie hit a high point with this week’s episode, after some of the early balancing hiccups that Season Two has had to correct so far. Once again though, we see the wheels turning of a larger plot to encompass the season, while also getting a well-executed dose of humourous brain shenanigans, and a compelling mystery-of-the-week, as iZombie has brewed constantly to make it one of The CW’s best surprise hits from midseason earlier this year. Finally, the show is in line with most of Season One’s high quality again, and now, it just has to keep maintaining this renewed balance on so many great styles and plot developments!