NOTE: Full spoilers for this episode of Agents of S.H.I.E.L.D., including a potential character death, are present in this review

Agents of S.H.I.E.L.D. got intense from both angles this week, as the hunt for more Inhumans and for HYDRA continued to get more aggressive. May even returns to Coulson when she feels that Hunter has gone off the deep end with his vendetta against Ward. There were some pretty big moments this week, and a whole lot of drama for everyone involved!

Even Bobbi, who is still largely confined to the lab, got plenty of angst and drama this week, as she continues to struggle with not being allowed into the field, still having to settle for being a forensic analyst, and running samples. She even gets reprimanded by Fitz for having a blatant disregard for his and Simmons’ supposedly clear-cut bagging system. The nerve of her!

As for the agents that actually were in the field however, which still seems to solely consist of Daisy and Mack, as everyone else is tied up in some other affair for now, they largely focused on hunting Lash this week. Lash’s killing spree shows no signs of slowing down, as an Inhuman couple and and what appeared to be a friend of theirs are killed by the hulking fiend, who manages to give Daisy and Mack the slip yet again. It’s getting quite suspicious to observe how easily a guy as conspicuous as Lash can keep escaping, isn’t it?

Fortunately, Coulson actually planted the separate Inhuman woman as a decoy of sorts, being a mental copy generated by a host that’s back in S.H.I.E.L.D. custody, and is apparently not even registered or authorized to see Dr. Garner, with her powers of mental projection and splitting personalities seeming to most take after X-Men mutant character, Legion, who was ironically just announced to have his own television series in the works at FX a few days ago. This leads to some evidence getting swiped by Fitz and Bobbi, though the bulk of it is still confiscated by Rosalind and the ATCU, who are already annoyed at Coulson appearing to hoard evidence for his own team. Naturally, the alliance between these forces is less than stable, and it’s still very appealing to see Coulson and Rosalind keep trying to get one over on each other, even when they’re forced to compromise against their will.

The plot thickens with Lash as well, when an associate of his is tracked, believed to be a computer expert that sent virus-laden tracking E-mails to known Inhumans in hiding. Daisy manages to corner the guy in a closet, though he screams in agony, forcing Daisy to give him a good knock against the wall with her vibration powers. Apparently, the Lash associate is also an Inhuman, who has the ability to identify other Inhumans by being near them. Problem is, he identifies them by feeling a migraine when they’re nearby, and it only stops after Lash apparently kills the person. We even see the conspicuous Terrigen Cocoon remains in the house that clearly indicate Lash’s affiliation with this fellow, so it’s not long before he ends up in the custody of the ATCU, though Coulson convinces Rosalind to take Daisy and Mack along, as a way of keeping an eye on what her forces do with the prisoner.

It’s a good thing too, since Lash attacks the transport, and manages to pull his buddy out of it. After demanding what the guy told the ATCU, he kills his friend, though doesn’t notice Daisy regaining consciousness as he appears to revert back to a normal human shape in the shadows! This is a great plot turn, since it confirms that Lash is not a monster, and is indeed an Inhuman who happens to have a very volatile set of abilities, not being the mindless predator that Mack, and most of the ATCU forces, believed he was. Lash is a pretty new character, even in Marvel Comics, so it’s thrilling to see what his agenda may or may not end up being for the Marvel Cinematic Universe, as we don’t have decades of lore to speculate upon with his character.

In fact, the Lash material was so good in this episode, that the Hunter material almost suffered a bit for it, even if it was the Simmons arc that truly felt pushed into the background. The whole idea of May asking Coulson to intervene was a good one, especially when we see that May and Dr. Garner didn’t exactly part on the best of terms after last season, again. We also see Hunter going further off the deep end, and Bobbi sensing trouble from the lab all the while, but things really get nasty when Hunter finally comes face-to-face with Ward, and a huge gunfight erupts!

This was a strong climax for the episode, particularly when May comes in just in time to save Hunter from eating a bullet after a HYDRA thug gets the drop on him. Backup is also on the way, though Ward complicates things when he reveals a live feed to May, showing that Dr. Garner has been cornered at the market, and will be killed if May doesn’t allow him to escape. Ward says he will allow May and Hunter to go free as well, though Hunter claims that the video is a bluff. May clearly doesn’t want any harm to come to her ex-husband, re-directs S.H.I.E.L.D.’s forces to Dr. Garner’s location, and is about to accept the offer, though Hunter leaps into action, essentially sacrificing Dr. Garner in the process, and opening fire on Ward. The result is naturally moot, as Ward gets away, though Hunter manages to nick him in the shoulder with one of his shots. Still, it hardly seems worth it in the end, as the look of heartbreak and betrayal on May’s face really cements just how much Hunter has fallen in his obsessive quest for revenge.

Making matters worse is that the next scene appears to show the fallen body of Dr. Garner, with blood around the area, as the gasoline-doused marketplace goes up in flames, courtesy of Werner von Strucker. Dr. Garner’s face isn’t shown, leaving a potential chance for Coulson to have recovered him in time, though the show leaves it nicely ambiguous. Hunter’s obsession may have led to some very dark consequences for May and Dr. Garner, and the idea of Dr. Garner becoming collateral damage over Hunter’s personal rage is one that should lead to great character drama, if it pans out, especially considering that Dr. Garner is the only qualified Inhuman-friendly therapist that S.H.I.E.L.D. has for now, until they inevitably recruit Lincoln later on.

After all of that horror, an epilogue sequence then has Simmons coming clean to Fitz about wanting to return to the mysterious alien world. Fitz is naturally confused, and initially adamant about not helping Simmons rebuild the portal, though he’s likely to lose that argument, especially when Simmons says that something happened to her on that world. What happened? I guess we’ll have to find out next week. 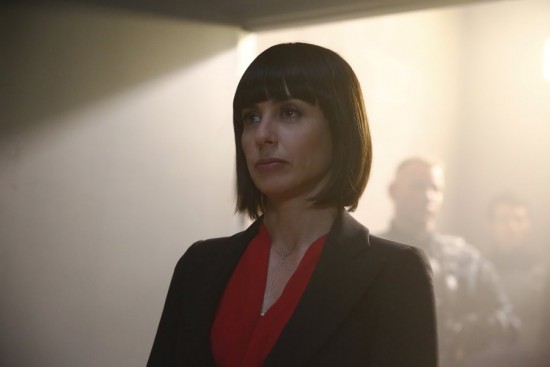 Agents of S.H.I.E.L.D. delivered a very strong Inhuman storyline this week, as well as a potentially fatal sacrifice by Hunter, though Lash largely took priority in the storytelling, which hurt the Simmons arc especially. Still, the high tension and drama made for a thrilling episode, as it seems like both Lash and HYDRA are becoming gradually more of an issue for S.H.I.E.L.D., and with such a rickety alliance with the ATCU, it’s probably only a matter of time before Rosalind becomes another threat as well.

Agents of S.H.I.E.L.D. 3.4: "Devils You Know" Review
Agents of S.H.I.E.L.D. continues to build the threat of Lash and HYDRA, as more Inhumans are marked for death, and Hunter's vendetta leads to some potentially terrible consequences for May.
THE GOOD STUFF
THE NOT-SO-GOOD STUFF
2015-10-21
91%Overall Score
Reader Rating: (0 Votes)
0%