Some things in Brooklyn Nine-Nine are sacred. Among those things are the traditional Halloween episodes for the series, which began with the first true instance of Peralta getting one over on Holt back in Season One. Holt got his revenge in Season Two’s Halloween episode however, where he outsmarted Peralta with a hysterically elaborate shell game that was very unlike his usual, cartoonishly serious character. Back in Season Two, both men announced that they weren’t done with the contest to prove who was the most amazing detective slash genius in the precinct, and sure enough, “Halloween III” details the tiebreaker. This time, the chance to call oneself, “King of the Nine-Nine” is on the line!

This year, the episode dropped all pretense, and didn’t even try to act like anyone was getting any work done for this latest battle of wits between Peralta and Holt. Holt immediately gave everyone the night off, so long as they were willing to participate in the heist, and he and Peralta then decide to arrange teams. Peralta chooses Boyle and Diaz, and Holt chooses Jeffords and Gina, which is probably predictable. Hilariously though, both men reject Santiago, with Peralta saying that she can’t be trusted because of her desperation to win Holt’s approval, and Holt saying that, because Santiago is dating Peralta, she’s likely to betray her captain in favour of her lover.

What’s the target for this year? A novelty crown (which appears to be the same crown that Peralta wore to celebrate his victory in Season One), that is being locked up in the interrogation room, which is conveniently never necessary on what is probably one of the worst nights of crime for New York in a year (Season One even pointed out the insane count of people that the NYPD generally has to arrest and deal with on Halloween, which are barely present in Season Three. Slow year?), which is in turn sealed in a briefcase. Boyle and Gina are assigned to watch the case, as Boyle shakes a flurry of roaches out of his pants, naturally grossing out Gina. Peralta then appears to drop in from the wrong vent, having a fake argument with Boyle, which allows Diaz to slickly somersault in, cut the crown out of the briefcase, and somersault away as Gina is too busy tending to the argument.

That’s naturally too easy though, as the deadline is still midnight, and Holt reveals that he let Peralta snatch the crown from the interrogation room, to make him over-confident. This is off-set by Santiago being the only lead character having to work on Halloween, and also being bugged by Scully and Hitchcock to participate in their own foot cream-stealing heist, to hilarious effect. Things only got funnier when Peralta looks like he’s going to apologize, only to shout at Santiago’s chest, believing that Holt has given her a wire. The joke got truly side-splitting when Holt has the same reaction later, to the letter, believing that Peralta has also stuck a wire in Santiago’s cleavage. Holt also apologizes for saying the word, “Cleavage”, because Holt is amazing.

The increasing lengths that both Peralta and Holt go to in order to steal the crown from each other are truly outrageous, and made for some of the best Halloween episode jokes in the history of Brooklyn Nine-Nine, even if the show’s tradition completely overrode the tradition of Halloween, which was still portrayed to best effect in the original Halloween episode from Season One. Still, it’s wonderful to see the show celebrating one of its own finest traditions to such spectacular effect, giving viewers the over-the-top tiebreaker that they no doubt crave. 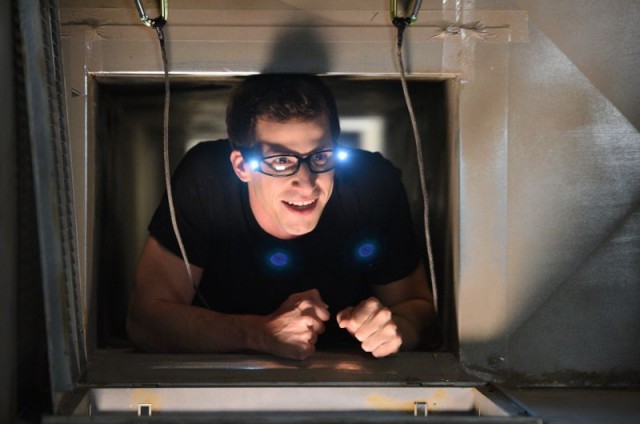 There’s even something of a decent twist in the end, when the crown ends up getting swiped by one of the janitors, and both Peralta’s and Holt’s teams have to rush to the janitor’s apartment, and then to the roof, while the elevator isn’t working (resulting in Peralta, a trained police officer, vomiting four times, because Peralta has the diet of an unsupervised six-year-old!), to find the janitor waiting for them. Turns out, it was Santiago in disguise, who explains her own heist being carried out in private, with the slight aid of Hitchcock, whom she had to explain simple directions to about forty-five times, and that she wanted to get back at both Peralta and Holt for hurting her feelings. With Santiago storing the crown safely at the precinct’s favourite bar, the deadline passes, and she is declared Queen of the Nine-Nine! It was a satisfying ending, since it would have ruined the Halloween tradition if either Peralta or Holt actually won the tiebreaker. Maybe Santiago will get her own hand in the heist, come the very likely Season Four next year?

Like I said, the highly detailed, fun and hilarious heist elements of the episode overrode everything else, which sort of spoke to how entertaining it was to watch. Still, the show decided to give Gina a potential new love interest, whom Gina rebukes to hysterical effect at first, believing that the handsome suitor is a play by Boyle in the heist. Later however, she calls him back, and the two appear to hit it off, before Gina learns that the man is the twin brother of Boyle’s new girlfriend, Genevieve, now sprung from prison! The episode ends on this very awkward, and very funny note. It’s cool that Gina might have a new man in her life soon, especially one that so brilliantly ties in to her uncomfortable affair with Boyle at the start of Season Two, but this felt a little awkwardly tossed in, and might have been better off waiting for a non-milestone episode.

Likewise, as great as the episode was, the Halloween humour was barely existent this time. There were some clever placements of a motion-activated witch, and a very funny intro gag that also addressed the goofy tradition of Boyle’s ludicrous costumes, resulting in the precinct playing a great prank on him when he decides not to wear one this year, but that’s it. Both of the previous episodes had far more Halloween-related humour, and “Halloween III” didn’t really pack it this year. The jokes were still very funny, but some may be let down that almost none of them are rooted in Halloween convention, unlike the previous two seasons’ Halloween offerings.

Still, the show handled the tiebreaker between Peralta and Holt excellently, even if its climax did make it a tad obvious that Santiago was going to be the true winner of the duel. With another party likely to be added to the Halloween mischief next year however, the seemingly inevitable “Halloween IV” is sure to be just as entertaining next season!

Brooklyn Nine-Nine 3.5: "Halloween III" Review
Brooklyn Nine-Nine delivered a hilarious, large-scale tiebreaker for Peralta's and Holt's traditional Halloween duel, even if the comedy was more about the show's convention, rather than the backdrop convention of Halloween this time.
THE GOOD STUFF
THE NOT-SO-GOOD STUFF
2015-10-26
86%Overall Score
Reader Rating: (0 Votes)
0%