The Walking Dead was… Interesting, this week. On the one hand, the episode was very thrilling, and was nicely punctuated by what appeared to be a massive dynamic shake-up, when one of the original core leads appeared to meet their end, albeit one that is already dead at this point in the source comics. On the other hand however, the episode nonetheless had the frustrating aftertaste of feeling like a filler episode, beyond that one major death, and simply a roundabout way to get rid of a character that the season had planned to kill off already. By the end of the story, nothing was really accomplished, and both Rick’s crew and Alexandria were largely in the exact same place that they were when the episode started, only now, more nameless Alexandrian people are dead.

After the immensely action-packed and exciting episode of last week, The Walking Dead once again moved outside of Alexandria, and returned to the perspective of Rick’s group, who are still attempting to lead the Walker horde away from the community. Several Alexandrian citizens get injured and quickly become a liability as they attempt to flee the Walkers, with Rick telling both Glenn and Michonne to abandon any survivors that are slowing them down. Rick also tells Daryl, Abraham and Sasha to keep pressing on their current path, though Daryl decides to break away, and this leads to some drama that… Didn’t really go anywhere, if I’m being honest. Daryl splitting off from the car didn’t amount to anything, and he just ended up circling back and joining the car again right as the episode concluded, with the Walkers’ path being diverted by the horn, but never really by Daryl, who is conveniently never chased, despite riding a very noisy motorcycle. Honestly, it just felt like the episode didn’t know what to do with Daryl, Sasha and Abraham this week, and that was annoying.

Michonne, thankfully, got far better material, as she had to manage survivors with Glenn, while Rick took the RV to try and get the Walkers diverted by the horn to move away from Alexandria. After the group makes their way to a nearby town, they hole up in an old pet shop, where Michonne has to tend to two Alexandrians with sprained ankles, and another who was bitten. The bitten man wants to give up, but Michonne insists that he’ll make it home. Glenn also splits off from the group, against Michonne’s wishes, and takes Nicholas with him, so that they can light a building on fire to try and draw the Walkers away from their location.

Glenn also got decent material this week, as we see Nicholas having to face the guilt of abandoning a young man who he re-discovered as a Walker, before the two find that the building they intend to burn has collapsed already. Oh dear. Making matters worse is that Walkers are starting to close in, so they run into an alley, and end up stranded on a dumpster, with a barbed wire fence behind them, and no real way out of the situation. Things are looking pretty grim, but Glenn’s gotten through worse before, right?

Well, that doesn’t matter. Nicholas spaces out for a minute as he looks at the horde of Walkers below, and as Glenn gets his attention, Nicholas tells Glenn, “Thank you”, and proceeds to blow his brains out, with his falling body dragging Glenn down under the Walkers with him, and seeming to confirm Glenn’s grisly demise, as Walkers munch on both his and Nicholas’ bodies. 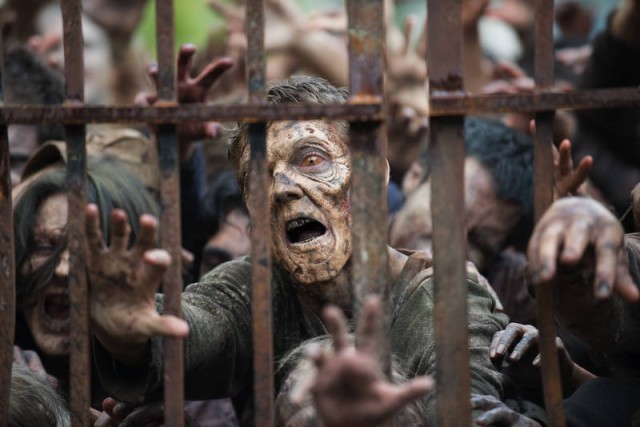 Yes, at long last, it seems like AMC has gotten bored with teasing Glenn’s death so many times, and has finally gone ahead and done it. Some people are speculating that Glenn may have somehow survived, but honestly, if Glenn somehow gets out of falling into an army of Walkers, that is going to be some grade-A bullshit, and a major cop-out on the part of the writers. Granted, the writers for this series have been guilty of cop-out deaths and cop-out survivals alike before, even last season, but I just don’t see Glenn getting out of this one. The camera even held on Glenn’s pained faces as torrents of blood and gore erupted below him. Maybe it was Nicholas’ body, but the writing is on the wall. Looks like Glenn is toast. His death was the only memorable moment in an episode that, while reasonably exciting, was also pretty forgettable in all other ways.

Anyway, Michonne ends up losing the bitten man and one of the two sprained survivors, which leads to some decent, albeit slightly canned Walking Dead drama, and eventually, she makes it back to the community with her other survivor, just in time to see the ruins of Alexandria that were left by the Wolves’ attack last week. This is the only glimpse we get of Alexandria in this episode, which otherwise stayed as a background objective.

Speaking of the Wolves, Rick ends up being attacked by some in the RV, which leads to some thrilling close-quarters action, and naturally, Rick kills them all, and gets away unscathed. Truth be told, it was the moment around this point that was most effective, with Rick trying to talk to Glenn on the walkie-talkie, and getting nothing but static. It wasn’t until he talked to Daryl, whom he was unaware split off from the car, that he finally gets a response. Even with the advantage of Rick’s crew and their skills, it looks like Alexandria is truly falling apart now, for all people within it. Rick isn’t safe either, as Walkers begin to surround the RV as its engine struggles and stalls, with Rick appearing to be helpless within it, right as the episode ends. At least that was a good point to end the episode on, though like I said, beyond Michonne returning to Alexandria with whatever people she could save, and Glenn and Nicholas biting the dust, most of the episode’s result just left the group in the exact same predicament that they were in already, with the Walker herd still being unresolved. 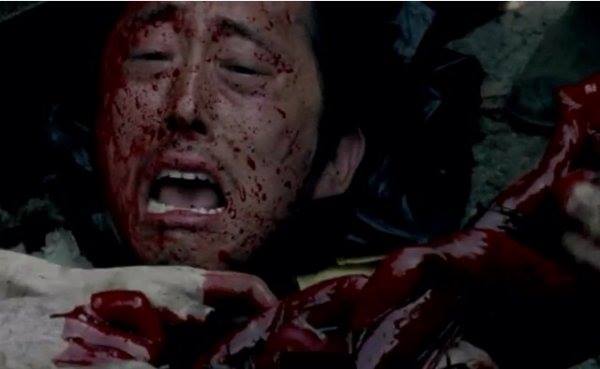 “Thank You” had a string of strong, exciting moments, imagery and drama, but when taken overall, its story was a little flimsy and forgettable. Obviously, Glenn and Nicholas’ deaths were the exception, and they did feel well-earned and emotional, but beyond that, the episode just ended right back where it started, which sort of made the bulk of the episode feel pointless, and like it was only put together to kill off Glenn. The exciting Walker sequences helped to distract from that, but ultimately, it felt like this week’s episode was all about killing people off, not about actually moving the story anywhere.

The Walking Dead 6.3: "Thank You" Review
The Walking Dead delivered a thrilling, bloody episode full of Walker carnage this week, punctuated by the death of a major personality from the beginning, though it was tripped up a bit by the frustrating aftertaste of settling for a filler plot.
THE GOOD STUFF
THE NOT-SO-GOOD STUFF
2015-10-26
80%Overall Score
Reader Rating: (0 Votes)
0%