It’s apparently getting to be slim pickings within the cupboards of The Last Man on Earth, as the group starts running low on food supplies, leading to Carol deciding to cook crickets for everyone, hence, the episode’s title. This goes about as well as anticipated, but Carol tries her best to make it fun. Some of the crickets aren’t even dead, until you chew that is! Oh, Carol, you tried…

This episode seemed to deal heavily with people’s stubbornness, whether it was Carol refusing to give up cooking crickets, Phil insisting on helping her cook said crickets, Melissa refusing to get a cut finger stitched up by Gail, other Phil refusing to stop hitting on Carol, and finally, Todd refusing to give up sneaking a whole fridge full of pristine bacon. Yep, Todd’s sinister secret was revealed this week. He’s been hoarding a huge supply of bacon to himself, and the reason for his darker nature lately is that he feels very guilty about lying to everyone about it, especially Melissa.

Phil eventually follows Todd into the secret room, and discovers the bacon supply. He confronts Todd about it, initially seeming like he’s going to rat him out, but then says that he’ll look the other way, if Todd agrees to eat the bacon with him. This was welcome, since it showed that Phil’s character hasn’t entirely abandoned his occasional fits of selfishness from Season One, yet also tied into Phil still wanting to seek redemption and be a better person, which Season Two has largely dealt with so far.

Not only that, but the hilarious sequences of Phil and Todd consuming bacon together, without the group’s knowledge, are absolutely gut-busting in terms of laughs! The rapturous montage of the two eating is done to very funny effect, as is Todd insisting that he can’t deal with his emotions regarding Phil, and they should just keep it about the bacon. I have a feeling that, “It’s about the bacon” will soon become a recurring meme amongst fans of The Last Man on Earth, for good reason, since this part of the story definitely felt the funniest and most satisfying to watch.

As for the other arcs, they were largely good, though didn’t quite top the bacon storyline. Carol eventually seemed to run out of jokes with the whole cricket thing, and despite the tension between her and Erica almost appearing to come to a head over other Phil hitting on Carol all the time, Erica then just does a one-eighty a short while later, tells other Phil to lay off of Carol, and seems fully ready to be Carol’s buddy now. I guess that’s fine, since Erica having a stick up her rear end all the time was getting old anyway, though her heel-turn did kind of feel like it suddenly came out of nowhere.

Likewise, the Melissa/Gail arc was alright, but it didn’t really excel in contrast to everything else. Gail insists that Melissa’s cut finger needs stitches, Melissa keeps refusing them on account of Gail’s drinking, and that’s about the long and short of it. Eventually, she relents, after getting drunk herself, and Gail naturally does a perfect job stitching up the finger. There’s a couple of funny jokes that come from a drunken Melissa afterward, but the episode doesn’t focus on it for long.

The episode reached a climax when Phil and Todd almost eat all of the bacon, and Phil decides to defy Todd’s wishes, giving the group access to the remaining three packs of bacon. After Phil hysterically tries to dispose of the evidence of more bacon existing, by tying the garbage to a jet ski and sending it rushing to sea, the jet ski ends up going back towards land, and sure enough, everyone notices it, even when they find the bacon at the same time!

After going to the beach, everyone accuses Todd of eating the rest of the bacon, which isn’t technically false, though Phil chimes in by saying that it was all him, and reversed the facts by claiming that Todd was the one who insisted that the bacon be shared, with Phil claiming that he was the one that refused. Naturally, the group doesn’t believe Phil, and Melissa demands the real story from Todd, who tells everyone the truth about his selfish actions. Phil however keeps trying to argue his own story, and asks who everyone will believe.

The two men then both end up in separate stockades immediately afterward, which is very funny, and fitting. How the hell does this house have a medieval-style stockade to begin with, let alone two?! Is there a stockade for everyone?! Well, in any case, Todd forgives Phil as he shares punishment with him, and the two attempt to fist-bump as the episode ends, though, rather amusingly, obviously can’t reach other’s fists. Still, it’s satisfying to have these two bury the hatchet. After all, everyone can only persecute Phil for so long! 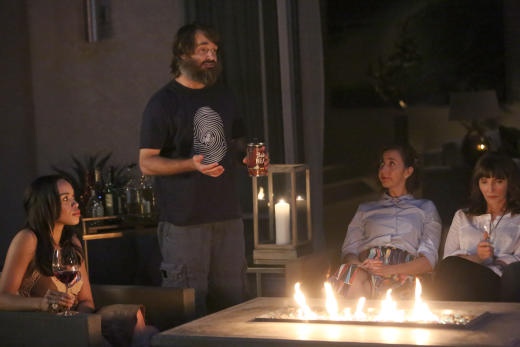 “Crickets” largely felt like a filler episode for The Last Man on Earth, but its standout bacon plot between Phil and Todd kept the entertainment value pretty high during those scenes. The other plots ranged from alright to good, though it’s clear that Phil and Todd were the real stars this week. After all, it really is all about the bacon!

The Last Man on Earth 2.5: "Crickets" Review
The Last Man on Earth elevated itself on a standout bacon-hoarding plot between Phil and Todd this week, even if the uneven nature of the other character arcs largely had this episode come off as a bit of a filler offering.
THE GOOD STUFF
THE NOT-SO-GOOD STUFF
2015-10-26
80%Overall Score
Reader Rating: (0 Votes)
0%