It’s been a long time coming, and Marvel somewhat beat them to the punch earlier this year with the superb Agent Carter, but DC has now launched a much-anticipated female-led superhero-themed drama of their own, this time CBS’ Supergirl! Coming from the superstar team of Greg Berlanti, Andrew Kreisberg and Sarah Schechter, who also developed and produce Arrow and The Flash over at The CW, and a non-DC Comics-related smash hit for NBC in new thriller series, Blindspot in the case of Berlanti and Schechter, Supergirl easily stands as one of this season’s most anticipated new television shows. Now that the series is debuting late, in time for the conclusion of CBS’ hosting of Monday night football, how does it fare in its first episode?

Well, it doesn’t speed out of the gate on the same level as The Flash’s pilot from last year, and doesn’t yet have the immediate power that Arrow’s pilot brought with it back in 2012, which kicked off this new wave of DC Comics dramas that networks beyond the Marvel-exclusive ABC all seem to want to get their hands on now, but Supergirl is still something uplifting, special and infectiously lovable, ultimately offering one of the most enjoyable pilot episodes of any new series this season. 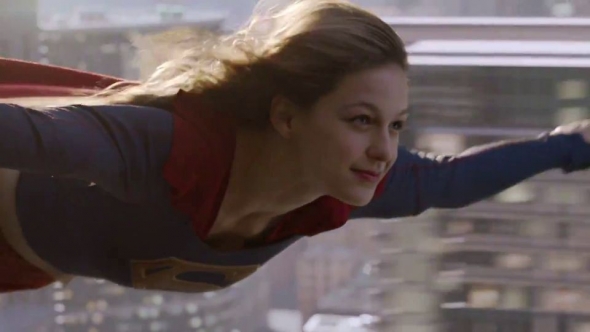 A large part of this is due to lead star, Melissa Benoist, who is an excellent choice for the role of Supergirl! Benoist is immediately irresistible and charming, having incredibly magnetic charisma as our greenhorn new superheroine. Obviously, you’ll see some parallels to the more widely-known DC Comics flagship character, Superman with her, namely in that Supergirl has the same abilities as her, “Famous cousin”, though there are plenty of key differences in this new series that firmly separate Benoist’s Supergirl from her male counterpart.

For starters, Supergirl actually remembers her life on Krypton, since she was 13 as she was ejected from the doomed planet, and knocked off-course in her escape pod by the explosion, which briefly suspends her in time within the Phantom Zone, the well-known extra-terrestrial prison where Superman baddies often end up in DC lore. Kara was originally planned by her parents to look after and protect her infant cousin, Kal-El, though after Kara is briefly pulled out of time thanks to the Phantom Zone, she doesn’t make it to Earth until later, when Kal-El is a fully-grown Superman, and has already come out with his powers, and public identity as a mighty saviour to the people of Metropolis. Thus, Kara is simply left to be adopted by the Danvers family, the parents of which are cutely played by former Supergirl movie star, Helen Slater, and former Lois & Clark Superman, Dean Cain. It’s a brief cameo for both for now, but it’s cool nonetheless.

This leads into the second major difference with Supergirl vs. Superman in this series, and that’s that Supergirl is not an only child. She has a sister, Alex Danvers, whom she is close with, though Alex secretly envies her adopted sister’s secret powers, which nobody knows about outside of the mostly-unseen Superman and the Danvers family. This leads into an interesting new dynamic that isn’t really explored in Superman stories, as Kara, Supergirl’s birth name that she maintains for her earthly identity, has a more deep-rooted human connection to the world around her, having been an alien that wasn’t only given the chance to grow up under the tutelage of wise, caring parents, but also under someone around her age from the human world who shared that house and upbringing with her, and was obviously thrown on to a much different path. 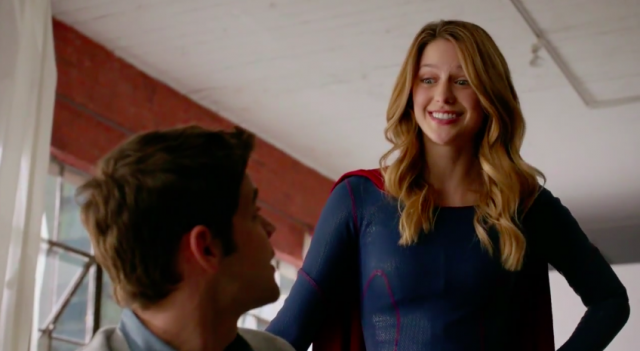 Where the pilot starts to tread more familiar ground is with the foundation of Kara’s job, with Kara now a 24-year-old woman who works for CatCo, a media conglomerate owned by Cat Grant, who should be recognizable as the gossip columnist and Lois Lane rival from the Daily Planet amongst Superman fans, though obviously, she’s moved on to bigger and better things by the time of Supergirl’s events. On this note, Supergirl does not take place in Metropolis, and instead unfolds in ‘National City’, a home of certain incarnations of Supergirl in some elements of DC lore. Anyway, the elements of workplace comedy are well-executed, though it’s hard not to notice a bit of Disney Princess syndrome in Kara, who whines about not being able to embrace her full self in the larger world, and make a difference within it when she knows she can just be so much more. That’s kind of the inverse to most Superman stories to a point, as Clark Kent always had to struggle to embrace his destiny properly, while Kara seems to be being pushed to avoid it to start, though naturally, that doesn’t last.

After a plane carrying Alex on it nearly crashes in the city, Kara leaps into action after getting ditched by a douche date, carrying the plane to safety, and revealing the identity of another mysterious superhero to National City, who are well familiar with the off-screen exploits of Superman in Metropolis. Everyone is fascinated by the new female hero, which results in some inspiring, if slightly on-the-nose dialogue about the novelty of female superheroes that Supergirl hopes to change in modern media, and this conveniently comes as Cat Grant is about to downsize the newspaper she owns, now dedicating said paper to solving the mystery of the flying woman that saved the plane. Kara is initially thrilled, though Alex is furious with her, saying that she should not be revealing her identity to the world. 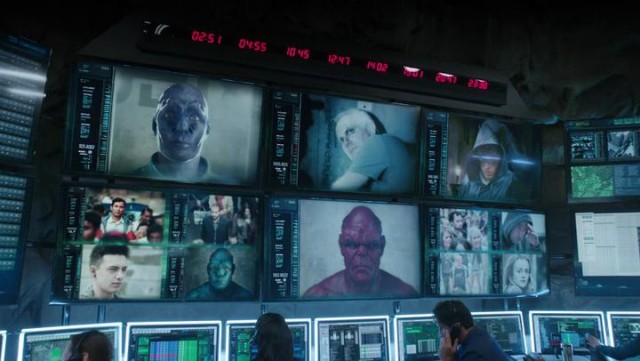 This is around the time that the show’s male leads become important, those being James Olsen, a handsome, African-American version of the normally ginger dweeb, Jimmy Olsen from Superman lore, and Winn Schott, a childhood friend of Kara’s who is clearly attracted to her, though Superman fans and DC fans in general will no doubt recognize his name as belonging to frequent Superman foe, Toyman, possibly setting up a villainous turn for the character later. Both Winn and James know of Kara’s abilities, with Superman actually encouraging James to transfer to CatCo to keep an eye on Kara, while Winn is the first person that Kara confesses her powers to outside of her adopted family, which… Doesn’t lead to much, honestly, beyond Winn being a forced device to help Kara through a montage of getting a handle on her heroic identity. Winn is clearly a Berlanti/Kreisberg/Schechter-approved benchwarmer character that simply exists to tease plot developments planned for later in the show, and he’s the only core character that felt under-utilized in this pilot for the most part.

Of course, Supergirl’s origin needs a villain, and we got one in Vartox, who is among a slew of Phantom Zone escapees that Kara inadvertently pulled to Earth with her escape pod after she escaped the timeless confinement dimension. Vartox is a starter villain-of-the-week, and has nothing in common with his more heroic DC Comics inspiration, wielding an atomic-powered axe that actually puts him more in line with highly obscure Superman villain, Lumberjack. He kicks Supergirl around a bit, after she gets a handle on how she wants to be a hero, with some slight help from Winn, and this leads to the intervention of the DEO, a secret government agency that was put together to monitor and defend Earth from extra-terrestrial threats. Alex also happens to work for them, and got the job in the first place after it came out that she grew up with an alien.

We meet Hank Henshaw, another recognizable name from Superman lore, albeit one that naturally hasn’t turned to villainy at this point, who heads the DEO, and heavily doubts Supergirl’s abilities and loyalties. Alex also discourages Supergirl at first, though before long, she has a change of heart, as does Henshaw, and they both give Supergirl the green light to stop Vartox in a climactic battle that is good, though predictably pilot-rough. This climax feels kind of rushed if I’m being honest, especially when Vartox inevitably stabs himself dead to avoid being captured when Kara uses her heat vision to destroy his axe and disarm him. Still, it does lead into an interesting tease for the rest of Season One, as the mastermind of the villainous Phantom Zone aliens is revealed to be Kara’s aunt, Astra, the twin sister of her mother, who has survived Krypton’s destruction, and conspires to rule Earth, spearheading an effort to kill Kara so that she can get revenge on the sister who apparently denied her her birthright of ruling Krypton. I guess that all this will be explored later. 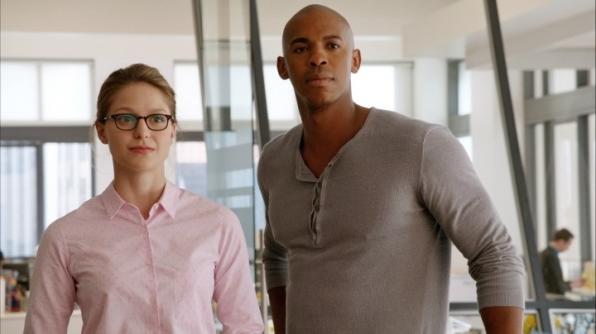 Supergirl definitely feels less edgy than many other modern superhero movies and shows, and is more light-hearted than even The Flash over on The CW, but its pilot episode already demonstrates tons of potential, and it won’t be long before this new series grows on you, especially if you already have a taste for comic book dramas. With a fantastic lead in Melissa Benoist, and a generally superb mix of action, comedy, romance and drama that the series already appears to balance with aplomb, this feel-good superhero series simultaneously succeeds as both a girl power anthem, and a generally entertaining superhero series that even male audiences can easily get behind. We’ll see if Supergirl can keep flying high this season, but for now, she’s a worthy addition to this season’s busy roster of veteran superhero TV stars!

Pilot Review: Supergirl
Supergirl's pilot episode treads some familiar ground and has a slightly rushed climax, but overall, the show successfully sets up an incredibly charming and empowering new female hero that will easily have you eager to tune in to her weekly adventures to come!
THE GOOD STUFF
THE NOT-SO-GOOD STUFF
2015-10-27
84%Overall Score
Reader Rating: (0 Votes)
0%