Gotham delivered a decent, but hardly exemplary start to the two-part Firefly arc last week in “Scarification”, which set up a new female version of the pyromaniac Batman villain, in the form of downtrodden adolescent girl, Bridget Pike. The second part to this story came this week in “By Fire”, a superior second half that was exciting, fast-paced, and, if you’ll forgive the pun, pretty heated for all of the show’s major personalities.

After Selina bailed Bridget out of a GCPD arrest at the end of last week’s episode, we did indeed get a cool Gotham City Sirens-style team-up between the two girls, who decide to rob a human trafficking auction to get some funds so that Bridget can skip town. This leads to a pretty interesting dynamic that has Bridget wanting to free the girls that are being held against their will, but Selina won’t allow it, sticking to the future Catwoman’s regular credo of always looking out for number one. Still, the idea of setting up the proto-Firefly as a would-be hero who genuinely wanted to do good, despite her background, was an interesting one that Gotham explored pretty well, even if it naturally wasn’t long before Bridget wound up on the wrong side of the law. 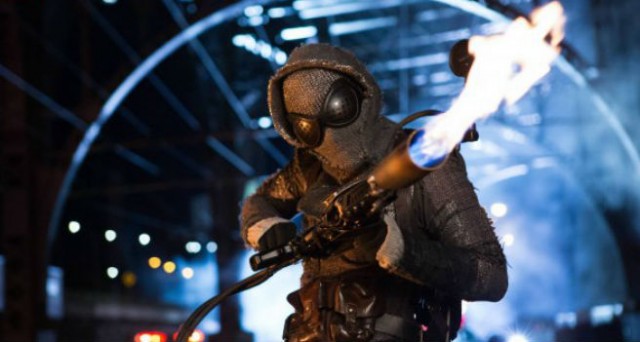 Meanwhile, Gordon has become increasingly more heavy-handed, beating goons and causing trouble as he desperately tries to search for a lead on the so-called ‘Firefly’ arsonist. This leads to a reprimand from Captain Barnes, who nonetheless spoonfeeds him his next lead, especially as Gordon is naturally not getting results. Gotham’s second season has definitely placed Gordon closer to the edge, with Bullock now seeming to be the more straight-edge cop in some respects, surprisingly, but it’s engaging to have Gordon feel more vulnerable and unstable than he did in Season One. It makes his future become all the more difficult to fight for, and with Gotham now being less afraid to uproot established Batman canon with its own unique take on the city’s pre-Batman days, this has improved Gordon’s character quite considerably, especially as he’s now coming off as the harsh, law-bending bruiser to the greenhorn cops in his strike force that he’s supposed to be setting a good example for.

Penguin’s operation to try and strike back at Theo Galavan also went into effect this week, as Butch seems to successfully infiltrate Galavan’s operation. Tabitha and Barbara even suggest fastening a weapon onto Butch’s severed hand, eventually settling on a mallet. Ok, I must admit that this is cooler than it has any right to be, even if the episode seems to be saving the potential of Butch’s weapon hand for later.

Butch does eventually find Penguin’s mother, or believe he does, though it’s not long before Theo Galavan announces that he knows Butch is a mole, and kicks him out of the operation, which obviously displeases Penguin considerably. Once again, Penguin is more interesting when he’s not on top of the city, and actually has someone that he needs to fight against. The loss of Fish Mooney is something that needs to be compensated for, since Fish was formerly the obstacle that Penguin had to overcome throughout most of Season One, even as he played double agent for both Don Falcone and Don Maroni. 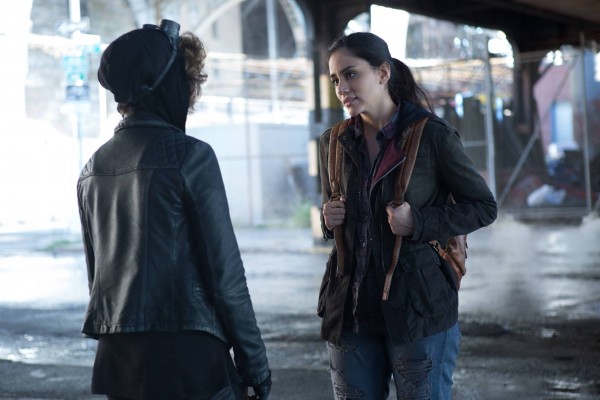 This week’s episode also saw the return of Bruce Wayne, though he was largely overshadowed by the other plots. Bruce has an enjoyable training sequence with Alfred, and an equally enjoyable dinner with both Theo and Tabitha Galavan, and Silver St. Cloud, whereupon Theo promises to help Bruce root out the corruption of Wayne Enterprises. Obviously, this is a trick, though it does add an interesting new wrinkle to Bruce’s campaign to fix his father’s company, especially when Galavan pleads ignorance to the disappearance of Mr. Bunderslaw.

Naturally though, the bulk of this episode dealt with Firefly, but surprisingly, Selina almost played a bigger part than Gordon and the GCPD ultimately did with her story. Bridget ends up being taken back by her brothers, and forced back into the family business, which finally leads into her snapping, and immolating her sadistic siblings with her flamethrower. Well, they obviously had that coming, but this does begin a chain of events that leads to Bridget finally cracking under all of her abuse, and becoming a fallen hero-in-the-making that is quickly consumed by anger and pain, and actually ends up becoming a menace. Like I said, it’s a pretty interesting idea for the forerunner to a future Batman villain, even if Bridget finally going over the edge felt a little bit like it came out of nowhere, especially after she was shrinking and crying in the very previous scene as her brothers abuse her more than ever.

Gordon has to try and coerce Selina into giving up Bridget, but Selina refuses to give up her friend at first. This was actually Selina’s best episode yet for Season Two, on this note. Selina feels like she hasn’t had much to do so far this season, and Bridget’s character finally makes her feel like an active and interesting presence again. Torn between her loyalty to Bridget and her need to trust Gordon, Selina ultimately surrenders Bridget’s plans to return to the human trafficking ring and light it up, on the promise that Gordon will not allow Bridget to be hurt. We even get a quick Ivy Pepper cameo while this is going on, which is how Selina gets cornered in the first place. Again, it’s a cool tease for the Gotham City Sirens of the future, especially when Ivy gives up Selina for little more than a candy bar.

The climactic confrontation with Bridget was very effectively intense too, with Bridget going full-blown firebug, and wielding her flamethrower with reckless abandon in an attempt to intimidate the GCPD into leaving. Gordon tries to calm everyone down, intent on keeping his promise to Selina, but a cop ends up nicking Bridget’s suit with a bullet, which causes a fuel leak that has Bridget go up in flames, right as she’s lighting up a cop car. Well, that’s certainly some hard poetic justice for this tragic character, who is believed to be dead right afterward. There’s no reason to doubt that, as several people died of flamethrower-related burns since last week’s episode unfolded, after all.

The fallout to all of this was terrifically dramatic to boot, with Captain Barnes expressing apathy at Bridget coming to harm, and even dying, while Selina vows never to trust Gordon again, feeling like he irreversibly let her down by allowing Bridget to die. Poor Gordon. Every time he tries to make a difference, it blows up in his face. No good deed truly goes unpunished in the depths of Gotham City, it would seem. 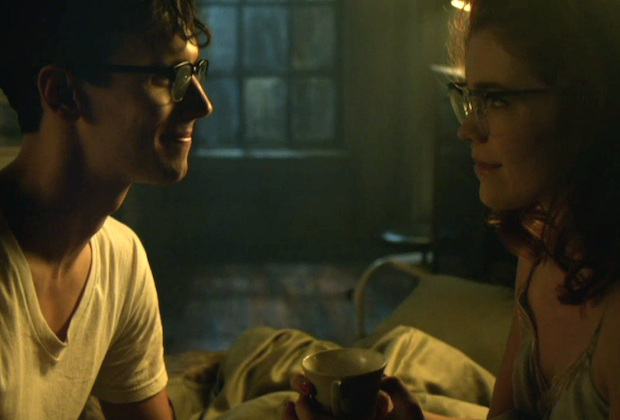 However, the episode ends off with something of a twist, as Bridget is shown to be alive, albeit severely burned, and seemingly permanently fused to her suit, as she’s wheeled in to an eerily familiar hospital wing. As Bridget’s fluttering eye peeks into rooms around the hallway, we see violent and no doubt unethical experimentation being done on other people, as Bridget’s handlers talk about her now being potentially fireproof, after her suit became part of her upon immolation that she barely survived. It should be very familiar to Batman fans, who will no doubt immediately peg this place as Arkham Asylum, but this actually leads into another twist, where this mysterious facility is not Arkham, but a separate location called ‘Indian Hill’, which is actually owned by Wayne Enterprises! What’s Indian Hill up to? Who knows, but viewers will no doubt look forward to finding out, especially since this seems to lay the foundation for the future of Arkham Asylum during Batman’s tenure, and I personally have the gut feeling that this mysterious facility will also lead into the introduction of another Batman villain to Gotham that we already know is coming in Season Two, Hugo Strange.

Lastly, even Nygma finally got some strong development this week, as he finally gets a chance to make love to Ms. Kringle, and makes the questionable decision of using that afterglow to confess his murder of her abusive ex-boyfriend. Kringle predictably freaks out and tells Nygma to stay away from her, but Nygma tries to stop her from leaving, not realizing that he’s choking her to death as he’s trying to protest. He ends up killing Ms. Kringle in the process by accident (or was it?), which shatters his psychology even more, and pushes him even further on his inevitable, tragic path to becoming future Batman villain, The Riddler. Sure, the Nygma material still feels disconnected from the rest of the show’s larger plot, and it’s kind of bullshit that a scrawny nerd like Nygma managed to choke Kringle to death in just over twenty seconds or so, according to the fast editing of the scene, but still, his arc moved forward in a big way this week. We all knew that Kringle was marked for death the second that she started dating Nygma, but the way it happened was reasonably well-done, unrealistic death time aside, and nicely came out of nowhere, right as you’d least expect it to happen, which made it hit with the appropriate shock and tragedy. 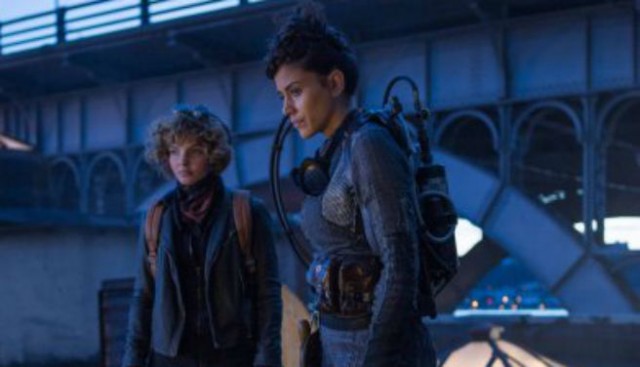 Every character seemed to have great material in “By Fire” this week, even those like Bruce who only had a handful of small story bits. The episode was very thrilling and enjoyable overall, and it capped off the new Firefly origin arc pretty well. We even get to see a welcome tease that Theo Galavan is still not the only bad guy worth his salt in Gotham City, since, assuming that Galavan has no involvement with Indian Hill, whoever is running that place has to be up to no good!

Gotham 2.6: "By Fire" Review
Gotham delivered a very exciting and story-packed episode in its second half to the Firefly origin arc this week, presenting new challenges for Gordon, offering a peek at another shady operation within the city, and finally having the Nygma storyline go somewhere powerful.
THE GOOD STUFF
THE NOT-SO-GOOD STUFF
2015-10-27
87%Overall Score
Reader Rating: (0 Votes)
0%