The Big Bang Theory once again got more in touch with its roots in “The Helium Insufficiency” this week, and fortunately, it did so a little better than it did last week. Leonard and Sheldon completely dominated the episode, as they toe the line of moral ambiguity when they’re forced to quickly get their hands on some helium, following a shortage at the school, and a Swedish team about to steal their published research hypothesis to beat them to a landmark discovery.

By themselves, Leonard and Sheldon brought lots of laughs and high notes, particularly when Sheldon inevitably overreacts to every possible breach of their university’s code in the duo’s efforts to attain helium, especially when they first go to Kripke, and he’s uncooperative. That’s disappointing, considering that the guys were perfectly fine letting Kripke teach them how to fence just last week, and Kripke even avoided being a douche that entire time more or less! I guess he was bound not to stay on that more mature note for long. 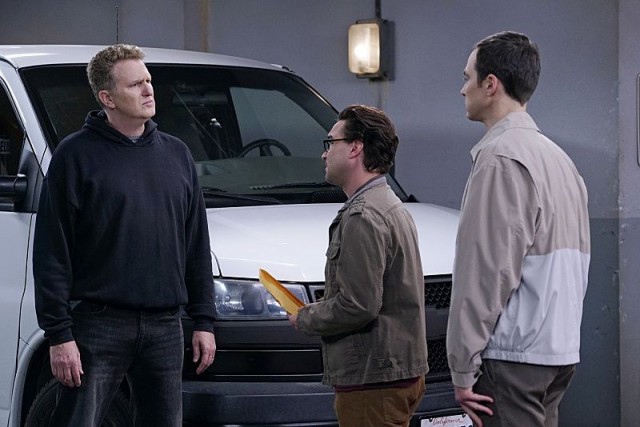 Howard however tips Leonard and Sheldon off to a, “Dealer” for under-the-table scientific materials, which seems to be their only option. This leads to a very amusing and well-executed guest role for Michael Rapaport as the dealer, who actually has fantastic chemistry with both Johnny Galecki and Jim Parsons. This led to lots of hilarious dialogue exchanges, as Leonard and Sheldon both overthink and needlessly complicate a simple helium transaction in the underground parking garage, and Rapaport’s dealer keeps getting one over on them.

The dealer was called back several times, as Leonard and Sheldon flip-flop over whether or not to keep the helium, but thankfully, Rapaport’s appearances were consistently entertaining, and the joke never got old. It was even funnier to see Leonard and Sheldon coughing up money over and over again, simply because they couldn’t decide if they wanted to go through with keeping the helium, and the dealer kept refusing to refund them. Kripke even offers to share his helium so that the two can complete their experiment first, in exchange for credit on their research, which leads to the two rushing back to get the helium for the last time. It’s all in good fun though, as the episode’s final scene has Rapaport enjoying a beer with Leonard and Sheldon in their apartment, as they prepare to watch Ernest Goes to Jail, which is apparently the only prison-themed movie that Sheldon has ever seen. It scared him straight, don’t you know!

It was great to see the show return to Leonard and Sheldon’s scientific careers after so much time away from their research, especially when said research ended up playing a pretty big part in much of last season. Even as the two men have their personal lives changed and thrown into turmoil, between Leonard’s marriage and having to move out of the apartment, and Sheldon having to live without Leonard and without Amy alike, their scientific exploits don’t stop. Fortunately, The Big Bang Theory put Leonard and Sheldon’s research back into the spotlight with this episode, proving that these two are still respected researchers after their findings in Season Eight earlier this year.

The main plot was so rich and amusing in fact that the subplot with Amy didn’t really make much of an impact by comparison, even if the concept behind the plot was good. This is where everyone else in the episode sits for most of proceedings, all hanging out in the Wolowitz house as they learn that Stuart has managed to get two dates from an app that feels very similar to the real-world Tinder app. The group decides to register Amy for the same app, and they end up having so much fun with the men on the app, that they start preparing drinking games and horribly embarrassing Amy, who has no say in the matter.

This is a great idea that lends itself to plenty of comedic possibilities, which is why it’s frustrating that this story arc sort of just fizzles, and mostly provides little more than some mildly amusing filler. The show wisely avoids naming the app, to avoid some of the low-hanging fruit of stereotype jokes related to real-world apps like Tinder, but the story largely felt like an aside, with no real development of consequence for both Stuart or Amy, despite both claiming that their love lives are moving forward off-screen. The truth does come out that Amy has been dating other guys in secret anyway, but nothing really comes of this at this point, especially when it doesn’t seem like any of these guys are really going to stick around. One of them gets a name, sure, but is Amy still going to be entertaining him by next Thursday, when The Big Bang Theory returns to its usual Thursday comedy bloc timeslot for CBS/CTV?

For the season’s final Monday episode, before the show returns to the Thursday slot next week, “The Helium Insufficiency” was entertaining and mostly well-executed, especially in terms of the main plot. Returning to the science of Leonard and Sheldon’s careers is a welcome direction for this week, since the show has been away from it for so long, even if the subplot with the rest of the gang didn’t have the same impact. Still, even if he swindled quite a lot of cash out of Leonard and Sheldon, I do hope that Michael Rapaport’s dealer makes a comeback on the show at some point. You never know when the guys might need another noble gas on demand!

The Big Bang Theory 9.6: "The Helium Insufficiency" Review
Leonard and Sheldon take a walk on the wild side, by scientists' standards anyway, as they steal this week's episode of The Big Bang Theory, which also offered a very entertaining guest stint for Michael Rapaport, even if the subplot didn't land quite as smoothly.
THE GOOD STUFF
THE NOT-SO-GOOD STUFF
2015-10-27
84%Overall Score
Reader Rating: (0 Votes)
0%