It’s the end of an era, as TV’s current most watched sitcom finally comes to a conclusion. Despite moving away from The Big Bang Theory coverage in recent seasons, due to a shift in focus and an overload of other television programming to cover, I return to evaluate the show’s final duo of episodes, which have the unenviable task of wrapping up both twelve years of history, as well as a sitcom that has become deeply entrenched in the modern cultural consciousness. The show even saw a bit of a quality rebound in its final twelfth season, despite running out of its best jokes years ago, and this left expectations for the series finale a bit higher than they otherwise would be, at least outside of The Big Bang Theory’s most die-hard fan circles.

The first episode comprising the two-part series finale of The Big Bang Theory, “The Change Constant”, is straightforward, and focuses entirely on a simple theme, one that’s nicely reflective of the show’s twelve-year history. The episode even begins with a lengthy recap montage detailing all of the key character evolutions and relationships throughout the entire main cast, including how each of the leads paired up and got married (save for Raj obviously, who instead had his big moment being when he learned to speak to women while sober), and how everything eventually came down to Sheldon’s big goal throughout the series– Winning a Nobel Prize. Sure enough, the episode begins with Amy learning from the Nobel Committee that she and Sheldon have won the Nobel too, after the big falling out between their impostor rivals, Dr. Pemberton and Dr. Campbell. 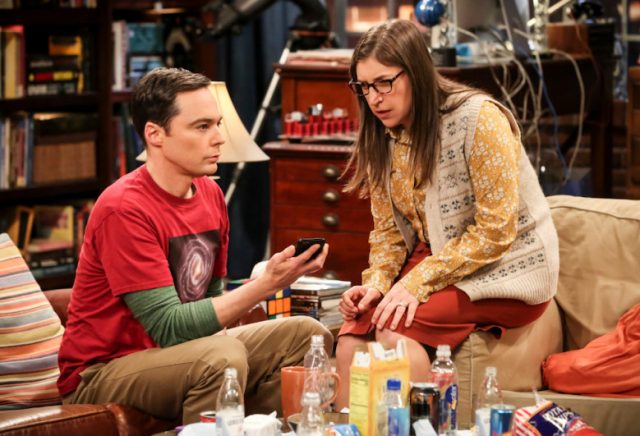 Admittedly, the episode delivers a pretty good hook here too. Despite everyone being overjoyed at Sheldon’s and Amy’s hard-earned success, a media blitz begins to make Sheldon overwhelmed at his newfound fame and recognition. This eventually causes a spiral that leads to Sheldon becoming terrified of new exposures and changes, admitting that he failed to take into account just how greatly winning the Nobel Prize would change his life. Considering that Sheldon has always been resistant to change, this is a smart story device that lends itself well to both humour and drama, particularly when things inevitably come to a head after Raj motivates Amy to get a makeover, completely changing her own appearance in the process.

Easily my favourite part about Sheldon being forced to embrace change, and no doubt the favourite part of many viewers as well, is the apartment managers in the Hofstadter and Cooper family’s building finally fixing the broken elevator, which hasn’t been functional since the series’ pilot all the way back in 2007! This was a smart and amusing way to signal the conclusion of the show’s era, one that also nicely tied back to Sheldon being forced to recall that him having to take the stairs with everyone for twelve years was also a change that he had to get used to, after the building’s elevator was functional when he first moved in. Penny being the one to bring Sheldon around to this realization was also a nice way for everything to come full circle with both of their characters, since Sheldon and Penny have arguably seen the most challenges through each other’s characters, even though Penny ultimately ended up with Leonard.

The core storytelling with Sheldon and Amy pretty much fired on all cylinders, though if there was a drawback in this episode, it was the fact that the rest of the cast didn’t always feel like they had very much to do, which is definitely a let-down for part of a series finale. Raj giving Amy a makeover is fair enough, and feels like a good use of his character, but the episode completely ignoring the fallout of his big decision to leave Anu is a little disappointing. Moreover, Leonard being the other major OG male lead of the show alongside Sheldon, and yet having nothing to do besides slap Sheldon in the intro, and break his molecule model in the corner, is another big let-down. The characters who definitely got short-changed the most however were the Wolowitz’s, who both headline a joke subplot about hogging Sheldon’s and Amy’s media spotlight, while posing as their respective best friends. These jokes not only didn’t land, but they also merely ended up making the Wolowitz’s look like complete dirtbags, which is a light that a beloved sitcom’s series finale really shouldn’t be painting two of its otherwise friendly leads in.

That said, the core story device of this episode was effectively meta in some respects, as the show itself appears to be delivering a comforting hand to avid fans of The Big Bang Theory, who are now being forced to say goodbye to a show that has dominated the airwaves for over a decade. Sure, we have Young Sheldon eager to sub in and fill the void, particularly now that CBS has literally doubled down on its commitment to that series with an advance two-season order to come, but it’s still a big thing to have to say goodbye to The Big Bang Theory, even if one’s opinion on it may have diminished over the past few, less consistent seasons. “The Change Constant” revolved pretty much entirely around Sheldon’s and Amy’s big Nobel Prize win, but it did a good job of finding one last unexpected challenge for Sheldon all the same. I wish that the rest of the cast beyond Sheldon and Amy were given meatier storylines, but I suppose that there’s still an entire half-hour of this series finale event to follow, so hopefully the subsequent true final episode spreads the love a little more.

The Big Bang Theory Series Finale Part 1: "The Change Constant" Review
The first episode comprising The Big Bang Theory's series finale event is a smart, fulfilling ushering of change for Sheldon and Amy, even if the rest of the cast gets a bit shafted along the way.
THE GOOD STUFF
THE NOT-SO-GOOD STUFF
2019-07-08
80%Overall Score
Reader Rating: (0 Votes)
0%