Arrow went extensively for drama this week, as Oliver revealed his plans to run for mayor to the team, and Captain Lance’s dark secrets begin to become exposed. There were no DC villains-of-the-week to terrorize the city. There was no pressing threat to Team Arrow. Instead, the Lance family’s past and present purely stole the spotlight for the most part, to great effect! As much as the drama was the star however, don’t worry about the action. The show still delivered lots of exciting and stylish action sequences, even without a recognizable DC baddie this week, so fret not, you’ll get your fix of Team Arrow kicking ass, even if most of the episode dealt with the Lance family drama.

Paul Blackthorne was definitely the MVP amongst the cast this week, as Lance is put through the emotional wringer, and must face up to his controversial actions in the wake of Oliver’s departure and return. Things get further complicated when Laurel brings home the revived and feral Sara, and shows her father what she’s done with the Lazarus Pit. Even Captain Lance claims that the zombie before him is not his daughter however, and is even prepared to put her down again, when Damien Darhk claims that the best thing Lance can do for his daughter is return her to her eternal rest.

As much as Captain Lance was a big player this week though, Laurel still feels overly self-centered, and isn’t coming off nearly as well. I get that the show needs to find an excuse to revive Sara for next year’s Legends of Tomorrow series, and Laurel is probably the one that makes the most sense, but Laurel’s character is really suffering for it at this point. As much as Sara’s senseless death was tragic last season, it feels even more senseless to bring Sara back to the world of the living in such an incomplete, suffering form. Laurel refusing to give up on Sara is supposed to be sweet, but in reality, it more often comes off as cruel.

Fortunately, even with all of the heavy drama, the episode wasn’t all doom and gloom. The team initially scoffs at Oliver claiming he wants to run for mayor, understandably so, since he didn’t even finish college, and has no political experience. Despite that however, they’re left in awe as Oliver reveals a new Arrow Cave that was put together in the old underground lair of Sebastian Blood from Season Two. I guess they cleaned up all of that murder and Mirakuru smell. Still, all jokes aside, it’s a slick new lair that continues to have the show feel like it’s nicely moving forward, and the optimism of Team Arrow’s operation being stronger than ever nicely offset all of the darker material with the Lance family.

As a political play of sorts, though one that still benefits Star City, Oliver decides to help Captain Lance capture a team of rogue cops that are dealing under the table with illegal evidence. The truth soon comes out that the team consists of members of Lance’s now-disbanded Arrow task force, which was a neat way to provide even more consequences of the past for Lance to face, once his partnership with Damien Darhk comes out. It does come out too, when a camera on Lance’s police car is hacked by Felicity, revealing Lance speaking with Darhk about the revived Sara.

What follows is a fantastic scene, probably the best so far this season, where Oliver waits for Lance in his apartment, and grills him about working with Darhk. This scene is incredibly emotional, and both Stephen Amell and Paul Blackthorne absolutely nail it. Years of animosity comes out as the two shout about betrayal, with Lance betraying his badge and Oliver betraying the city by leaving with Felicity, and leaving the SCPD desperate, and forced to deal with villains like Darhk, which, again, gave more weight and power to our villains this week. Things culminate with Oliver revealing that Lance is the reason he decided to run for mayor, since he wanted to provide something that the man he believed Lance was would be proud of, but apparently, Lance is not that man.

This is where the episode’s title comes in, with Lance and Oliver alike having to both explore the idea of being beyond redemption. Fortunately though, neither quite hit the point of no return, as Oliver and his team do successfully corner the villains, though Oliver is caught and held at knifepoint in the process. Lance talks to the former task force captain, saying that everyone on the force is desperate, and they all had to do what they had to do to get by without The Arrow, and after the devastating losses they suffered from villains like Deathstroke and Ra’s Al Ghul from seasons past, but they haven’t truly lost as long as they don’t give up on the force, or on Star City. This leads to the captain surrendering, thankfully, and provided an unusually clean and happy ending for most of Arrow’s turnouts with characters like this.

Things round off with Oliver getting a campaign team together, thanks to the help of Thea, and Lance and the SCPD successfully endorsing him. So far, he’s running unopposed, but it’s nonetheless satisfying to see Oliver on his way to a promising new career upgrade! Too bad Laurel can’t share in the festivities however, as she sees that Sara has broken free of her confinement, and this is where the episode ends. Uh oh. 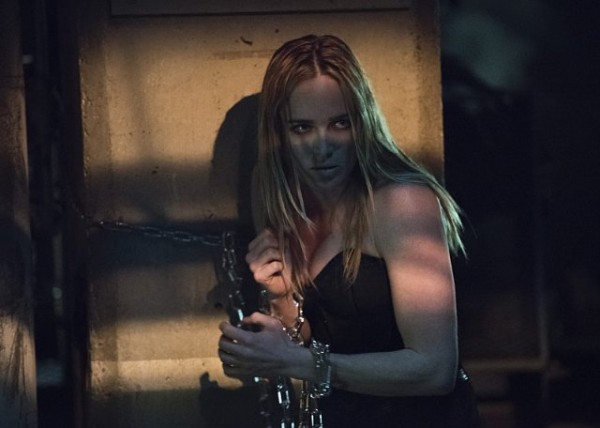 There was still some material with Felicity, but it was more disconnected this week. Felicity continues to get mysterious text messages, and Curtis encourages her to check out the final log of Ray’s experiment, but Felicity refuses, eventually coming out to Curtis that she was dating Ray, and doesn’t want to listen to her former boyfriend die. After the events with the rogue cops however, Felicity does decide to give the log a listen, and seems to finally put together that Ray is still alive, and is merely very, very small. Yes, viewers no doubt know that already, at least, if they’re at all familiar with next year’s Legends of Tomorrow, which will count a very-much-alive Ray as part of the team, but it’s nice to finally have Felicity figure out that Ray isn’t dead, even if this arc was completely disconnected from what was going on with everything else.

As for the flashbacks, they were, again, good, but nothing too special. It’s cool to see Oliver sort of taking on a Yao Fei-esque role with the surviving woman from the drug fields now, as he uses the death hold technique to make the woman appear dead to a nosey henchman of Reiter. The henchman soon after discovers Oliver’s dropped A.R.G.U.S. mission computer however, and the truth comes out that Oliver is a double agent. Looks like he’s going to be in a tight spot next week.

“Beyond Redemption” excelled in action and drama, and didn’t even need a recognizable DC villain to do it this week! The standout scenes with Captain Lance, especially his confrontations with Oliver, were immensely satisfying, as were noteworthy upgrades like the new Arrow Cave, and Oliver’s campaign for mayor finally getting off the ground. The episode perfectly balanced darkness and light as well, and continues to really demonstrate how much Arrow has improved after its shaky third season!

Arrow 4.4: "Beyond Redemption" Review
Arrow offered a superb helping of drama this week, as the dark secrets of Captain Lance come to light, and the results begin to unfold from Oliver declaring his run for mayor, and Sara being brought back to Star City after returning from the dead.
THE GOOD STUFF
THE NOT-SO-GOOD STUFF
2015-10-29
92%Overall Score
Reader Rating: (0 Votes)
0%