Another week, another brain, though iZombie seemed to be far more about matters of the heart this week. All sorts of uncomfortable relationship dilemmas were dredged up in “Even Cowgirls Get the Black and Blues”, with even Babineaux getting a shot at some romantic tension, when a sexy FBI agent is assigned to work a couple of desks away from him at the Seattle PD. It’s not even February yet, and already, love is in the air for everyone! You’d think iZombie would leap at the chance to have a Halloween episode for the first time this week, but apparently, that’s not the case.

Speaking of the case, this was another episode where the case-of-the-week firmly played second fiddle to all of the character drama. Liv has to consume the brain of a murdered waitress that also happened to be a well-liked amateur country singer, and it’s not long before she goes full-on bumpkin. Some of her dialogue was a little much, and it once again skimmed the line of painting all of a certain kind of person in an unflattering light, which iZombie inadvertently does on occasion, but fortunately, Liv’s latest murder victim is at least a sympathetic character with some nice emotional insight to compensate for her over-the-top bumpkin dialogue.

After learning that the woman was strangled to death, suspicion immediately falls on her ex-boyfriend, who was recently let out of jail, and surprise, was put there in the first place for having a short temper that led to assault and battery charges. It seems obvious from early on however that the ex-boyfriend is clearly a red herring, and this is confirmed when the victim’s manager flees in his car immediately after being questioned.

Unfortunately though, this doesn’t go anywhere of consequence, since the episode initially appears to have the manager’s pregnant wife rat out his lack of an alibi, before it soon after comes out that the woman was lying for… Reasons. Honestly, after Babineaux threatens to arrest her for filing a false report, neither she nor the manager is ever truly seen again. Maybe a scene was deleted, but it was quite abrupt to have the show drop this plot thread immediately after it was supposed to go on its latest twist and turn.

Outside of this week’s case, Liv also got a chance to reunite with Peyton, and the reunion between the two women is nicely emotional, especially when Liv thanks her for the birthday cake that Peyton left her last week. Peyton is naturally suspicious of Liv’s roommate (and she’s right to be), who is continuing to hook up with Major without Liv’s knowledge, as Major is continued to be forced to kill zombies left and right for Max Rager. Naturally, his Utopium addiction is also continuing to worsen, to the point where he’s neglecting his new dog, and it has to be Ravi to snap him out of it enough to retrieve the animal when it goes missing. Boy, Major’s sure getting bad, isn’t he? It was amusing to see Ravi name the dog, “Minor” though. That was kind of cute. 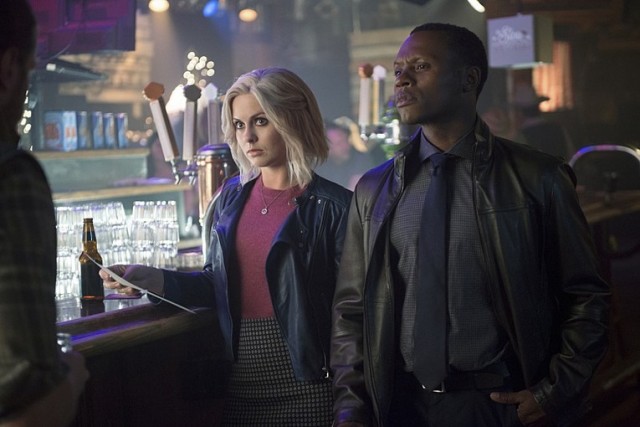 Liv meanwhile is embracing her latest brain by singing on stage, and actually doing a pretty good job of it. I’m not sure if this is Rose McIver’s actual singing or not, but if it is, she certainly did a great job, especially since she’s Kiwi, and is obviously not singing in her natural accent. Even her victim’s former boyfriend is moved, telling Liv that he wasn’t good enough for the woman he loved, and that Liv should be a better woman.

This leads into Liv once again attempting to reconcile with Major, who would rather sit, play video games and get high, naturally. Liv ends up blowing up at Major when she attempts to say that they should stop seeing each other completely, and Major appears apathetic about it, leading to a pretty heated and emotional moment between these two, especially since Liv is unaware of Major’s drug addiction. Peyton is also apparently crashing at Major and Ravi’s place temporarily to boot, though this upsets Ravi more than Liv, especially after Ravi brings his new girlfriend over, and Peyton awkwardly walks in with Ravi not knowing she was coming.

On another note with Peyton, she also comes into contact with Blaine, who is the only man willing to cooperate in her attempts to take down Stacey Boss. This is another superb twist that should lead to Peyton’s character becoming exponentially more interesting than she was in Season One, likely tying her into the true dark side of the zombie community, just like what’s been happening with Major. I can’t wait to see where this development goes, especially as Blaine’s arc sees him torturing and zombifying a reformed dealer, who stubbornly refuses to cooperate with him, even as Blaine turns him loose without a brain supply. Oh boy. That’s not bound to end well.

Anyway, things looked bleaker than ever for Liv and Major after that spat previously, but surprisingly, despite Liv almost appearing to end the episode on a depressing note again, much like she did before discovering the birthday cake left by Peyton last week, Major comes to her apartment of his own accord. He simply tells Liv that he needs help, and is about to confess his drug addiction to her… Before the embrace turns into a kiss, and the episode ends here. Maybe some will anticipate this turn in advance, but it’s satisfying to see that Major still isn’t irredeemable, even after all of his zombie-killing and drug problems.

Oh, but what about the case-of-the-week, you ask? Well, turns out, the killing was done on impulse, and was completely unplanned in a panic, by someone who robbed a convenience store and killed the clerk, then hastily tossed the gun and hid in the victim’s house, killing her when she discovered him. This explains a somewhat weird intro where some kids are drinking and find the gun, then start messing with it, right as Babineaux’s captain talks about him needing to find a gun to make a murder stick. Honestly, the case-of-the-week was yet again a blatant afterthought this week, and its setup and resolution were both weirdly estabished and executed, with the witless and unsatisfying final result being especially frustrating. Much like “Zombie Bro” from a couple of weeks ago, the show pulled the killer out of its ass when the evidence didn’t lead anywhere organically, and that’s a big let-down.

Still, “Even Cowgirls Get the Black and Blues” was nonetheless an emotionally satisfying episode that compensated for its lousy case-of-the-week with more well-done character storylines. Liv’s eaten better brains, and certainly solved better mysteries, but at least the lead cast of the show is as appealing as ever, even when the rest of the story is a bit wanting.

iZombie 2.4: "Even Cowgirls Get the Black and Blues" Review
iZombie sadly delivered a lousy, unsatisfying case-of-the-week this week, though compensated with plenty of standout character moments, as Major finally tries to get help, and Peyton begins the process of rebuilding her old friendships.
THE GOOD STUFF
THE NOT-SO-GOOD STUFF
2015-10-29
82%Overall Score
Reader Rating: (0 Votes)
0%