Microsoft’s next foray into the world of pro gaming is starting off with a huge bang. Two of them, in fact: the Xbox One Elite Bundle, and the Xbox Elite Wireless Controller.

The Elite Bundle includes a black Xbox One console with a 1TB drive that is a combination spinning disk merged with a chunk of solid state memory to give gamers a boost in performance. All around, it won’t add much to gameplay, but it’ll speed up loading times here and there. The other big part of the bundle is the Xbox Elite Wireless Controller, and it is something to behold.

We’ll say this: the Elite Controller has no right to exist in its current form. It screams out “modified” or “third-party” in its ideas, but its execution is entirely first-party and 100% Xbox.

The Elite Controller has a number of enhancements above its traditional counterpart. In addition to hot-swappable analog sticks and d-pad, it features four paddles on the rear of the controller as well as mapping presets, hair trigger locks, and gripped handles with just about the perfect amount of friction to keep the thing in your hands without sweating. 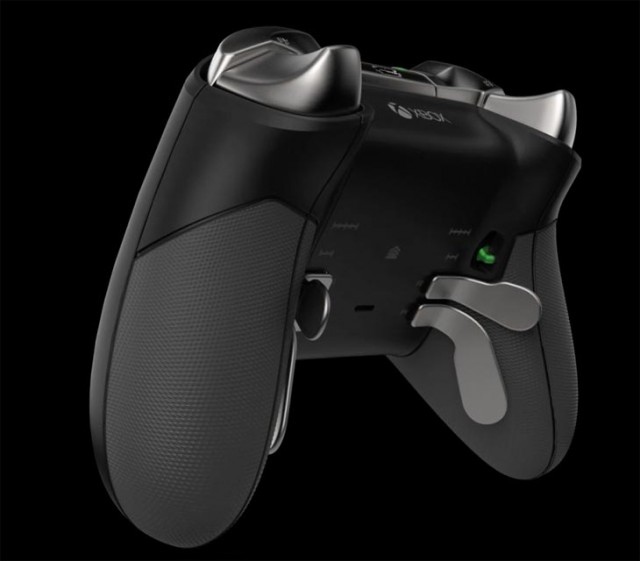 That’s a lot of stuff, and this kit doesn’t come cheap: it’ll run you $149, or just under half the price of the console itself. But everything it does is here to serve the gamer, and that it does incredibly well.

There isn’t a way to describe just how the Elite feels until it’s in your hands, and at that point, it doesn’t take anything to convince someone that it is a better, more solidly-built controller.

The modular components were what really made us worry the most, but they are perhaps the least concerning element. The analog thumbtacks and d-pad pop off the controller without much force, yet they didn’t once–not a single time–ever shift or feel loose, let alone fall off, during gameplay.

The paddles, on the other hand, felt a bit looser, and while they didn’t fall out, either, it seems a bit more care could have been put into the way they latch in. The hook and magnet system they have right now just isn’t working in as solid a way as it could, and it’s unfortunate, because the paddles are one of the most professional additions Microsoft could make to its controller, but it’s just not quite right. To be fair, the smaller paddles fair a lot better than the longer one, likely because the formers’ fulcrum is a lot closer to the body of the controller.

Microsoft also managed to include hair trigger locks, and while there isn’t any fine-tuning to be done with regards to the triggers–they’re either hair triggers or they’re not–we’re not sure there needs to be. Once we sat down for a few matches of Warzone in Halo 5: Guardians, there was a very clear difference between hair triggers and the usual setting, and it makes a world of difference in a duel between battle rifle-wielding spartans.

Beneath the modular components of the controller lie a magnet system that locks everything into place, and Microsoft being Microsoft, decided to have a bit of fun with these. In stark contrast to the black-on-grey-on-black aesthetic of the Elite Controller, the portions hidden beneath the d-pad are classic Xbox green. It’s a beautifully whimsical addition to an otherwise colourless controller, and though it has absolutely no functional effect whatsoever, it’s a little design element we would’ve missed had it been omitted.

On the omission front, there is one component to the Elite that a lot of people would have liked, but we feel could have hindered the experience: rechargeable batteries. The Play and Charge kit is something pro gamers can invest in if they choose, but including it in the box could prove to be a bit of a hassle. The thing about batteries is that, even with all this planet’s technological advancements, they’re a bit unpredictable. Imagine a rechargeable battery swelling up and leaking into your $150 controller. Sure, AAs could do that as well, but not likely at the rate you’re going through them if you’re the type of person to buy a controller this expensive.

Which brings us to price. It’s actually exactly where we’d expect it to be. Not remarkably expensive when considering that some other pro controller options and add-ons can top out at $100, not including the price of the controller itself. The Elite Controller also comes with all the components you need: three sets of analog sticks in varying heights and tip design, two directional pads, four paddles, the batteries you need to power it, and a carrying case to keep it all sorted.

At $150, the Xbox Elite Wireless Controller is a big kid’s toy for those who don’t necessarily need it, but a tool for those pro gamers who will find it improves their game. So call us big kids if you must (because we’re certainly not professional gamers); this is the best controller we’ve ever used.