Most of the jokes throughout this episode were pretty good, though the writing saved most of its cleverness for dealing with Peralta and Santiago. The two have a seemingly minor disagreement about Peralta’s poor-quality, heavily dated mattress, which is bothersome to the point where Santiago can’t sleep well, in turn affecting her performance at work. Peralta is desperate to put off buying a new mattress, citing the cost, though it’s also pretty clear that he’s having an intimacy issue at the same time, as conceding on the new mattress would mean that his belongings are no longer just his.

The two decide to table the discussion, and even manage to convince Captain Holt to let them pursue a lead together, when one of Santiago’s CI’s tips them off to the dealer of a new drug called ‘Taxi’, which is thus named because it’s yellow, and takes you where you want to go. It seems strange to say, but Brooklyn Nine-Nine really has some of the best fictional drug names on television, between this, and last season’s Giggle Pig. Even Peralta points this out!

Regardless, the episode does a good job of having the small conflict steadily build, particularly as Peralta and Santiago try to balance their work life and personal life. Their first bust has the two firing on all cylinders, effortlessly coordinating the arrest of the Taxi dealer, to the point where it even impresses Holt, though things fall apart when the two attempt to go mattress shopping, which ends with Santiago storming out of the store. Things get worse from there when they must apprehend the supplier of Taxi, with the mattress debate turning into a full-blown fight, their first as a couple, in turn tipping off the supplier to a police presence, and leading to him getting away.

This was an inspired consequence, particularly when it leads to a highly amusing reprimand of Peralta, even if we unfortunately don’t see Santiago’s own disciplining by Holt. Perhaps this is best though, since it’s Peralta that needs advice, leading to Holt confessing a similar issue with the man he eventually married, whereupon a long-distance relationship led to neither man wanting to buy a car to visit the other. When Holt’s husband surprised him with a car one day, Holt regretted not being the first one to do it. Peralta is inspired, and decides to buy a new mattress so that Santiago can be comfortable. There’s a funny outro, where Peralta tries to buy the new mattress online while waiting for the Taxi supplier to surface again, somehow ending up on the Canadian site in the process, but honestly, the episode ends pretty abruptly. It felt like the final few minutes were chopped out, especially when we don’t see how the bust goes, and it feels a tad awkward.

Regardless, the Peralta/Santiago plot was still a lot better than the subplots, which felt lacklustre this week. The larger of the two subplots, the Boyle/Gina/Holt plot, unfolds when Boyle sees a car double-parked in Holt’s space, and complains to Gina about it. Apparently, the car belongs to Holt, who carelessly double-parked it, and Boyle refuses to confront his captain about this grievance. In trying to make do however, Boyle ends up scratching Holt’s prized car, and has no choice but to fess up. 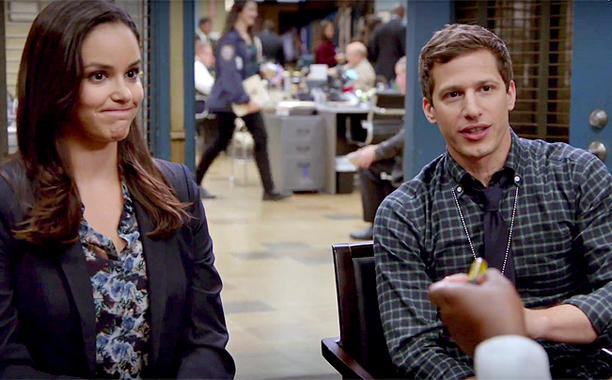 Immediately, this storyline is kind of suspect, and it felt like Holt got this storyline simply because he was a leftover, after the Peralta/Santiago and Diaz/Jeffords pairings that were already in play. Holt double-parking a car that precious to him, frankly, doesn’t make a lick of sense, especially given his heavily detail-oriented personality. Granted, it was kind of cool to have the car tied into the Peralta/Santiago conflict (this car is the same car that Holt’s husband bought to prove how much Holt meant to him with the long-distance connection), but when the subplot is so laboured, and forces Holt so far out of character, it immediately undermines the entire story, especially when the jokes involved were mostly middling. The exception however was Gina, who is hilarious as ever, and actually did a very clever illustration for Holt as to how he was wrong, by placing a prized cupcake on his chair, and letting him sit in it. Again, being the captain of a police precinct especially, there’s no way that Holt would ever think Boyle is at fault for scratching his double-parked car, but at least the Gina bit at the end was pretty funny.

Similarly, the Jeffords/Diaz plot, while better than the other subplot, felt kind of half-baked. This subplot involves Diaz revealing to Jeffords that she mentors a young boy, as a part of the Big Brothers program. Jeffords is concerned about Diaz’s conduct as a mentor, which is put to the test when the boy gets arrested for shoplifting a cellphone. Diaz is naturally furious, and immediately flies off the handle, though Jeffords tries to explain to her that she can’t be so rough on a kid. To illustrate his point, Jeffords brings in Diaz’s old dance teacher, whom he doesn’t realize is actually quite strict and critical of Diaz. Despite that however, the experience reminds Diaz of her own childhood being ruined, and that leads to her letting the kid off with a warning. That’s literally the whole thing.

To be fair, the jokes in this subplot were better than the flimsy Boyle/Holt jokes this week, but it felt like most of this subplot was deleted in the final episode. The conflict feels rushed-through and predictable, and it doesn’t really feel like it fully capitalizes on the great idea behind it. I do hope that this isn’t the last we see of the kid that Diaz is mentoring though. Given that she’s now broken up with Marcus, that could be a way to prevent her from fading into the background as a one-note gag character, which happened in Season Two for a bit, before she met Marcus.

“The Mattress” largely got by on the strong Peralta/Santiago plot this week, though the subplots felt undeniably compromised, particularly the Boyle/Holt conflict, which was a real dud. The jokes were overall satisfactory for the most part, though nothing on the level of some of the better jokes in some of the former episodes this season. At least Peralta and Santiago took a nice step forward in their relationship though.

Brooklyn Nine-Nine 3.7: "The Mattress" Review
Brooklyn Nine-Nine effectively pushed the relationship between Peralta and Santiago forward this week, even if it came at the expense of some blatantly compromised subplots between the rest of the precinct.
THE GOOD STUFF
THE NOT-SO-GOOD STUFF
2015-11-16
74%Overall Score
Reader Rating: (2 Votes)
72%