NOTE: Full spoilers for this episode of Doctor Who, including a major character death, are present in this review

Oh boy. Well, “Face the Raven” was quite the episode of Doctor Who! To start, the episode was something of a break from the rest of Series Nine, since it was the first episode in the entire season to actually not be part of a two-part story. It had nothing to do with last week’s “Sleep No More”, which now seems like it’s teasing something ambiguous to come whenever Series Ten arrives, or perhaps even later. Not only that, but this episode finally saw the departure of Jenna Coleman from the series, pretty definitively too.

Yes, Clara Oswald is dead. This is the first time that New Who has directly killed off a full-time companion to The Doctor (Amy and Rory don’t count, as they were allowed to live full lives in a different time), making this episode a pretty big event. We also got the return of Maisie Williams’ Ashildr (or “Me”, if you prefer), in a new story that stood alone for the most part, though did end with the stage set for the two-part season finale that will unfold over the next two weeks.

The story begins with Rigsy making a return from Series Eight episode, “Flatline.” Rigsy discovers a mysterious tattoo on the back of his neck, which appears to be counting down. Rigsy contacts The Doctor to ask about what’s going on, and after a brief visit, The Doctor concludes something pretty ominous; Rigsy is going to die when the tattoo reaches zero. Left with no choice, The Doctor, Rigsy and Clara decide to seek out a mysterious hidden street in London, where the person responsible for the tattoo is said to dwell.

What follows is a pretty amusing sequence of flying the TARDIS over London, until the approximate area can be pinpointed with the Sonic Glasses. From there, The Doctor, Clara and Rigsy look for aggressively unremarkable places in the city, which ordinary citizens would inevitably overlook, particularly due to the aid of a misdirection circuit. After Rigsy locates the hidden street by having an associative memory triggered, the three step into a secret alley, and are quickly captured by undercover aliens. Turns out, the street is a refugee camp for fleeing alien life forms, and it’s run by none other than Ashildr, continuing her mission to look after the remains of The Doctor’s work throughout history, and housing several familiar races, including Ood, Judoon, Ice Warriors, Silurians, and even some Cybermen!

The mystery that the show sets up is pretty good, with Rigsy being accused of killing a psychic woman with two faces, a member of a new race of aliens called the Januses, despite Rigsy obviously not remembering this. The device of the Chronolock is also pretty good for the most part, as Ashildr places Chronolocks on aliens who break the rules of stealing supplies or committing acts of violence. This is effectively displayed when a Shade taking the form of a raven steals the soul of an undercover Cyberman who stole medicine, as the street’s denizens, and The Doctor’s crew, bear witness.

After collecting a bit more intel, Clara and Rigsy learn that the Chronolock can be passed on to a willing person. Clara then enacts a Doctor-style plan, whereupon she convinces Rigsy to pass the Chronolock on to her, as a risky strategy that will force Ashildr to remove the Chronolock regardless of what the investigation turns up, as she promised The Doctor from the get-go that Clara wouldn’t be harmed on the street. It seems clever on paper, though you can see where this is going, as Clara’s obsession with emulating The Doctor finally catches up with her.

The rest of the investigation sees a bit more twists, and it mostly unfolds like a routine Doctor Who mystery. It’s discovered that the victim’s hidden offspring is not a male, but actually a female disguised as a male, to hide psychic ability that only female Januses possess, and The Doctor soon after discovers that the victim is not actually dead, but being held in stasis. When Rigsy points out a keyhole, The Doctor figures out that Ashildr is after him, and he’s what the incident is actually about. Against his better judgment, he uses the TARDIS key to release the victim from stasis, but in doing so, gets slapped with a teleport bracelet that he can’t remove, right as Ashildr walks in.

What follows is a pretty great twist, where it’s revealed that the entire mystery was an act, forged by Ashildr, to lure The Doctor to the hidden street. Some unseen faction wants The Doctor to come to them, and made a deal with Ashildr to make it happen, under threat of the street, hence, the teleport bracelet. Ashildr says that it’s time to remove the Chronolock, but Rigsy no longer has it; Clara does. Apparently, this leaves Ashildr’s hands tied, as the lock can’t be removed after Ashildr made an initial contract with the Shade, and thus, Clara is irreversibly doomed.

Obviously, this is the decisive point of the episode; Clara’s death, which serves as the centerpiece of the whole thing. On the one hand, most of the scene was done incredibly well. The incredibly emotional final scene shared between Peter Capaldi and Jenna Coleman was very well-done, particularly as Clara tearfully tells The Doctor the same thing she told him back when he was the Eleventh Doctor in Series Seven, “Don’t be a warrior. Be a Doctor.” The Doctor’s threats to Ashildr were equally powerful, and the line immediately after Clara dies, where The Doctor tells Ashildr that it’s a very small universe for someone that he’s angry with, is nicely discomforting. All of the thematic elements and dialogue behind this scene were sublime.

The only slight issue with it came from the fact that the death was, in all honesty, a tad contrived. You can tell in some places that the show is reaching for an excuse to kill off Clara, as it goes against the rules of the Chronolock out of nowhere, despite the episode pretty clearly establishing how it works. Ashildr suddenly deciding that the lock can’t be removed just because it changed people feels like a cheat, especially when she’s supposed to be the master of the Shade involved. Also, the excuse that she promised the Shade a soul is kind of bullshit. The Shade just had a soul in the form of a Cyberman not a few moments earlier! Granted, you could make the argument that Cybermen don’t have souls, but it wouldn’t be a strong argument, since the show has established repeatedly that Cybermen are converted humans, which would in theory have a soul somewhere in their programming, plus, if Cybermen don’t have souls, then the Chronolock shouldn’t work on them in the first place. Also, can’t Clara and Rigsy switch the lock back? How does the Shade know that the lock has been switched? If Ashildr takes the lock herself, would she just revive and render it moot? See, the scene raises too many questions, and as cool as the Chronolock is, the show sort of breaks its own rules with it when it comes time to get rid of Clara, and that’s incredibly frustrating. 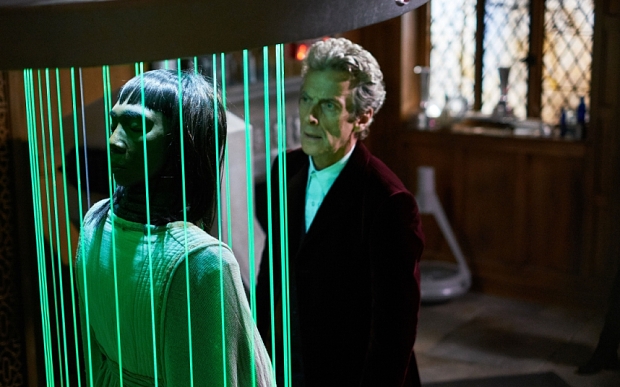 Nonetheless, “Face the Raven” was still a pretty strong episode that nicely set the stage for the season finale. The emotional death of Clara was pretty impactful, and the fallout from the act is sure to mean big developments for both Ashildr and The Doctor later. The idea of The Doctor’s love of mystery being used against him was also pretty inspired, especially by a character like Ashildr. The fact that The Doctor is now alone and without a companion should also hopefully lead to a season finale that’s especially thrilling, and will at least leave The Doctor more vulnerable than he’s been in quite some time.

Doctor Who 9.10: "Face the Raven" Review
A shocking resolution and the first direct death of a companion in New Who history led to an especially emotional episode of Doctor Who this week, and one that pretty strongly sets the stage for the season finale.
THE GOOD STUFF
THE NOT-SO-GOOD STUFF
2015-11-23
86%Overall Score
Reader Rating: (1 Vote)
87%