Brooklyn Nine-Nine held a big event this week, as the main plot involved Jeffords’ wife, Sharon entering the precinct, and promptly going into labour! Yep, the third Jeffords baby officially comes this week, but not before a string of hilarious disasters at the precinct that lead to great use of all of the show’s leads, and a very funny episode that makes for a highly entertaining and satisfying offering this week.

Another great thing about “Ava” is that it allowed Peralta to be the grown-up for once, taking charge in lieu of Jeffords, who is indisposed with Diaz when he must interrogate a murderer’s accomplice at Riker’s, under a pretty heavy time crunch. Jeffords and Diaz have already left when Sharon goes into labour, and since an internet breakdown forces Santiago, Boyle, Scully and Hitchcock to fill out heaps of paperwork as the bullpen becomes more and more crowded, due to the day’s heavy arrest count, Peralta is the only one left to assist Sharon. 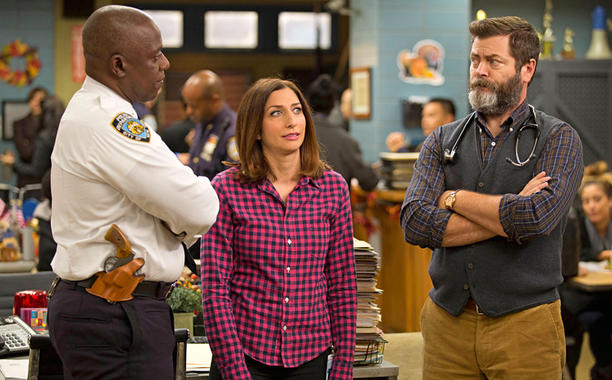 Fortunately, Peralta does get at least some help from Gina, who is comically squeamish about being around pregnant women, especially those going into labour. Gina’s aversion to pregnancy made for some of the best jokes in an episode that is already quite funny, especially when Peralta gets pulled somewhere else, and Gina is left to tend to an issue like breathing control or distraction. Gina initially attempts to run interference with Captain Holt, though this doesn’t last long, as Holt quickly intrudes on the Sharon situation, even when it’s been established in several previous episodes already that Holt has a bad habit of making Sharon uncomfortable, without meaning to. It was actually kind of neat to see this episode finally acknowledge that running joke, and have it mean real consequences for the plot this time.

Holt nonetheless is a key force in saving the day however, as Peralta finds himself unable to get ahold of a midwife, and both Sharon and Jeffords are refusing to have their baby in the hospital, because of the bad experience they had with their twin daughters being born there. This is perhaps a bit contrived, as there’s definitely more than one hospital in New York City, if the Jeffords family wanted to avoid the one they went to before, though the ridiculous superstition would in theory line up with the former behaviour of Jeffords, who famously got so riled up from his daughters being born at the start of the series that he couldn’t even be in the field without shooting up a bunch of store decorations. Maybe the show is making a subtle effort to call back to that very early joke, and if so, that’s pretty clever!

How does Holt save the day, you may ask? Well, an ex-boyfriend of his happens to be an OBGYN doctor. Problem is, the guy broke up with Holt on very bad terms, and Holt is worried about confronting him again. Since he’s desperate however, Peralta twists Holt’s arm into revisiting his ex, who is played in a very funny, albeit brief guest role by Nick Offerman as Frederick, one of the many footnotes in Holt’s, “Sordid romantic past”, as Peralta calls it.

While the joke of Holt and Frederick fighting over Holt’s unceremonious disposal of a valuable wooden duck (which is apparently over $700 in value!) is pretty funny, one of the only issues with this episode is that it could have used more of Nick Offerman. Offerman is a very funny man, as Parks and Recreation continually proved on NBC for seven seasons before it wrapped, but he has just a few minutes of total screentime here. He does deliver the baby, but this naturally happens off-screen, since FOX no doubt can’t show the squeamish details of childbirth in a Sunday night sitcom. If we’re lucky though, perhaps Frederick will return to Brooklyn Nine-Nine at some point down the road, even if the Holt nemesis role is already filled by Madeline Wuntch.

Beyond this, the episode carries itself nicely with a selection of great jokes and unbelievable office disasters, all of which effectively stem from the chaos caused by the precinct being under-prepared for the simultaneous breakdown of wi-fi, and Sharon going into labour. Scully and Hitchcock finally got some decent screentime this week, working nicely off of Boyle and Santiago, and while Diaz and Jeffords weren’t quite given as much to do, Jeffords still managed some pretty hilarious moments, with a gut-busting highlight being when he breaks into tears in front of the accomplice he has to interrogate, who tells him everything simply because his wife is giving birth, and he doesn’t want to miss it.

“Ava” is an especially well-written episode of Brooklyn Nine-Nine, and naturally, it didn’t skimp on the laughs either. It was satisfying to see Peralta man up and do the mature thing for once, though not fully at the expense of his character, fortunately, while the show finally acknowledging Holt’s constantly awkward interactions with Sharon feels overdue, and nicely capitalized on here. The way that the episode made all of the ludicrous precinct trouble worth it was also quite uplifting, and the birth of the new baby Jeffords should have fans buzzing. Hopefully Jeffords doesn’t get shell-shocked in the field again because of it though!

Brooklyn Nine-Nine 3.8: "Ava" Review
Brooklyn Nine-Nine capitalized very well on the birth of the new Jeffords baby this week, as the precinct is forced to suffer through a number of disasters in the wake of Sharon unexpectedly going into labour at the office!
THE GOOD STUFF
THE NOT-SO-GOOD STUFF
2015-11-23
90%Overall Score
Reader Rating: (1 Vote)
90%