The Last Man on Earth delivered one of its smartest episodes in a while with “No Bull”, which offered a superb group dynamic that really effectively explored the importance of these survivors being a unit. The fallout of Phil placing other Phil in the stockade didn’t amount to too much, but that’s fine, since the episode’s resolution had the group finally getting past their aggressive tendencies towards the two Phil Miller’s.

This week wasn’t without some tragedy either however, not to mention some group shake-ups. Between original Phil and Carol’s bumpy return, to Erica being pregnant, to the bacon incident with original Phil and Todd, everybody is on edge, which leads to them greeting other Phil in the stockade with a surprising amount of apathy, even as original Phil tries to vouch for him.

The plot properly gets going however when Todd calls everyone over to the cow’s location, where they discover that she’s given birth to a calf. This confirms the group’s suspicions that a bull is nearby, and they decide to seek it out when Todd suggests it as a means of breeding the livestock so that they can secure more milk, though Melissa snaps at him about being obsessed with babies. Yes, the tension between Todd and Melissa is approaching a boiling point as of this episode, and in fact, it also hits a climax.

After the initial attempt to find the bull proves unsuccessful, Todd confronts Melissa about their bad relationship state, and Todd suggests taking a break. Melissa however responds by saying that the two would actually be better off splitting for good, and that appears to be the end of their relationship. That’s kind of a bummer, though it’s difficult to deny that Todd may have dodged a bullet here, since Melissa just seems to get nastier with each episode at this point.

Todd actually had quite a lot of focus this week, almost as much as the two Phil Miller’s! Todd is the one to fully discover just how Gail has been carrying on with the CPR dummy, and while bull hunting, Gail confesses to Todd that she has indeed been dressing up the dummy in Gordon’s clothes, and doing unspeakable things with it. Todd however says that it’s alright, especially on account of his struggling with Melissa, since they both just want to feel a sense of intimacy when they feel like they’re losing someone. This results in Todd going straight to Gail after he and Melissa split, and this results in a surprising and amusing kiss between the two. Looks like Todd won’t be taking too long to find another partner, even if he no doubt won’t be announcing it. I have to say though, some of the Gordon reflection might have meant more, had we seen more than a few seconds of him, at least, when the show tries to be serious about Gail’s loss. 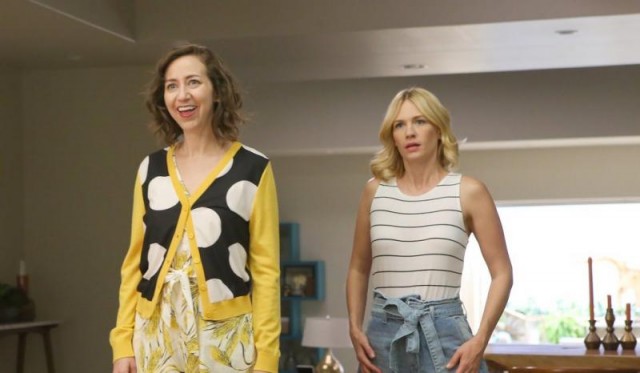 Meanwhile, original Phil trusts other Phil to find the bull after the initial failed attempt, and lets him out of the stockade. Other Phil immediately leaves for Canada however, leading to original Phil trying to plead with the group to forget about the bull and look for the other Phil. They refuse however, and original Phil’s attempts to fix the situation merely lead to everyone fighting with each other. This does lead to some amusing scenes though, such as when Phil accidentally drinks the cow urine that they were using to track the bull, and goes on a speech about the importance of labeling, before another sequence where Phil gives everyone rocks, and talks about casting the first stone, before breaking a window with his to stop everyone from fighting.

The other big highlight this episode was a return for Mike Miller, who is still floating around in the space station above Earth, desperately trying to contact someone, as his last worm dies. The tragedy of Mike’s situation was wonderfully complemented by the happiness of the united group back on Earth, particularly when Mike discovers that his communicator is broken, and is stuck in a feedback loop with his own speech. This has the episode ending on a particularly strong final scene, as Mike gets high on nitrous oxide in his underwear, while the group enjoys a big meal of bull together. Yes, they do find the bull, but accidentally kill it when everyone hits it with tranq darts at the same time, upon other Phil reconsidering leaving, and coming back to the group with the bull in tow. The episode was a great mix of comedy, family and tragedy, as the lonely Mike suffers in contrast to the group recklessly enjoying their latest bit of stupidity in terms of dealing with the bull. Their milk plan is kind of shot now, but hey, at least they get to enjoy some quality meat in the meantime! 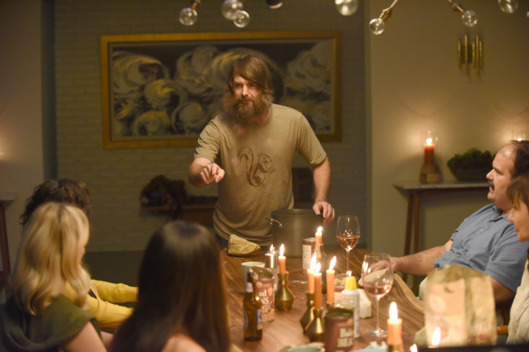 “No Bull” had a great theme of togetherness and the importance of not facing life alone, especially after the apocalypse. That, paired with Will Forte really being at the top of his comedic game this week, made for a particularly satisfying episode of The Last Man on Earth. Mike’s situation is looking pretty bad though. I doubt he’ll commit suicide, since that would make most of his scenes feel pointless, but maybe it’s time he takes a chance and comes back to Earth to see his brother. It can’t be any worse than where he is now!

The Last Man on Earth 2.8: "No Bull" Review
The Last Man on Earth delivered a great episode about the importance of family this week, even as Mike Miller becomes consumed with despair, and the plan to find a new livestock supply option doesn't quite go as planned.
THE GOOD STUFF
THE NOT-SO-GOOD STUFF
2015-11-23
88%Overall Score
Reader Rating: (0 Votes)
0%