One of the most adored and thoroughly fantastic games on the Xbox 360’s Xbox Live Arcade catalogue is definitely Epic Games’ and ChAIR’s Shadow Complex, a Metroidvania-style adventure game that combined fast-paced shooting action with rich, expansive exploration. Despite being exclusive to Xbox 360 up to this point, and not receiving a sequel, despite its huge success and acclaim, a rating for a remastered PC version recently surfaced on the European PEGI ratings board. At The Game Awards tonight, that PC remaster was made official, along with console ports for PlayStation 4 and Xbox One that are set to arrive in 2016. 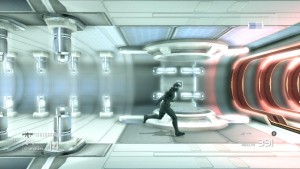 The PC version however was surprise-released tonight, shortly after its unveiling at The Game Awards. Still better is that the PC version of the game is completely free, if downloaded from www.shadowcomplex.com! You have to download an Unreal Engine client to get to it, and will likely run into server crashes with the sheer amount of people rushing to claim their free, brand-new game, but a free PC remaster for one of the greatest Xbox 360 exclusives ever released is definitely a deal that no gamer will want to pass up! Don’t procrastinate too much though. After December 31st, the game will not be free anymore, and will return to its usual paid pricing.

Shadow Complex places you in control of Jason Flemming, a man vacationing with his girlfriend, Claire, who ends up being kidnapped while spelunking. Jason goes after her, and ends up embroiled in a struggle with her kidnappers, while also unearthing the true plan behind the bad guys’ operation and underground base.

Keep rushing to Eggplante for all news and updates on Shadow Complex.