For a little while, it looked like Marvel and Netflix’s upcoming Marvel Cinematic Universe-set Netflix series, Iron Fist, the fourth series originally ordered by Netflix under a collaboration to lead into crossover miniseries, The Defenders, was in trouble. Rumours began to surface that the series was being re-tooled into a Netflix Original movie, rather than a series, or had been scrapped altogether, in favour of being replaced by a series starring Jon Bernthal’s incarnation of Marvel anti-hero, The Punisher, set to be introduced during the second season of Daredevil next year. The radio silence on the show’s development wasn’t assuring either, despite Marvel also stressing that the rumours were exaggerated. 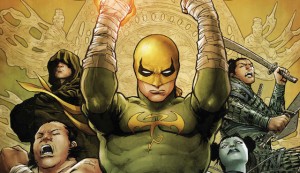 Well, it seems like we can finally put those rumours to rest once and for all, thankfully. After a lengthy search, Iron Fist has found a showrunner, confirming that re-tooling or cancelling the series wasn’t an option, and that any talk to the contrary is, mercifully, hogwash. Scott Buck will serve as the showrunner of Iron Fist, with Buck having an esteemed television resume, between his work on Rome, Six Feet Under, and the final four seasons of Dexter.

According to Marvel Television boss, Jeph Loeb, Buck’s pitch for Iron Fist knocked Marvel off their feet, and they were incredibly impressed, virtually hiring him on the spot. The title hero of Iron Fist still has yet to be cast, though with a showrunner now being set, it’s probably not long before someone is found to fill the gi of the title hero. Fortunately, Marvel did tease the first details of the series, which will apparently involve Daniel Rand (he may not be ‘Danny Rand’ in his MCU incarnation), the civilian identity of Iron Fist, coming back to New York, after being missing for many years. Upon his return, he uses his incredible martial arts abilities to strike back against the criminal elements infecting his city, as the Living Weapon, the Immortal Iron Fist!

Iron Fist is believed to be debuting on Netflix in 2017, which would place it a year before The Defenders in 2018. You can catch the debut seasons of the first two Marvel/Netflix collaborative shows, Daredevil and Jessica Jones, on the streaming service right now (both scored extremely well with us!), with the second season of Daredevil and the debut season of Luke Cage set for 2016.

Keep battling Eggplante for all news and updates on Iron Fist, and other developments for the Marvel Cinematic Universe.