After a decent, but not overly remarkable pilot episode, Superstore continues with a similarly decent, but not outstanding sophomore offering. Now that the establishment duties of the pilot are out of the way, at least, at their very basic level, “Magazine Profile” feels like a small step forward, ultimately being a better-focused episode that has some truly laugh-out-loud moments, within some of the better scenes.

The overarching plot of the episode completely revolves around the visit of a reporter for Cloud 9’s corporate magazine, Stratus. Glenn naturally wants to impress the reporter, though the rest of the employees could care less, particularly Amy, who sees the magazine as a rag for corporate propaganda (“Minimum wage is maximum fun!”). Nonetheless, Amy agrees to give Glenn a makeover with the help of Mateo, despite Glenn’s comical nervousness.

The heavy focus on Glenn helped to give this episode a better sense of direction and purpose, like I said, though Glenn’s character still hasn’t yet found his groove. The whole overly nervous thing has been done before in many other sitcoms, and it felt like the episode was stronger when it was focusing on the subplots, which involve Cheyenne and her boyfriend, Bo trying to compose a jingle, only for Bo to keep getting overly political in a rap, and Garrett trying to avoid a photographer that wants to get a photo of a disabled employee for Stratus’ cover. Again, nothing standout, but it works.

In fact, some of the material with Garrett is actually pretty funny. Garrett’s increasingly ridiculous attempts to dodge getting his picture taken are pretty amusing, particularly one especially funny moment where he double-flips off a customer, just to make a photo unusable by the creeping Stratus photographer. The photographer mistaking Garrett ignoring him for Garrett being deaf was kind of funny too, even if the obsession with getting disabled employees on the cover felt like a joke that was somewhat half-baked. Still, it made for some decent Garrett material, complete with a sweet ending where Garrett agrees to get his picture taken, so that Glenn can fulfill his desire to be on the magazine cover. The joke of obscuring Glenn’s face with a label, and Glenn not noticing, is a joke that’s been done before, again, but at least the Garrett material was satisfactory.

Fortunately, Jonah got some slightly better material in this second episode as well, as he starts to overtake Glenn’s feeble attempts at giving the reporter ideas for the store, especially when Glenn becomes amazingly awkward around her. Jonah tries to prop up Glenn in the reporter’s eyes, but it doesn’t really work, and the reporter ends up fully taking a shine to Jonah. Amy tries to pass this off jokingly as the reporter having a crush on Jonah, but Jonah takes offense… Except Amy turns out to be completely right, with the reporter cornering Jonah for a make-out session in the storage room, which Dina sees via the security cameras. 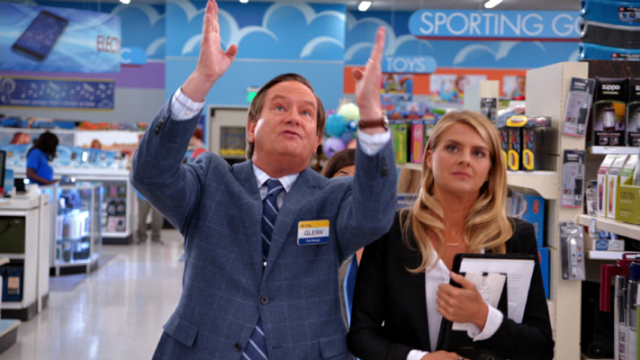 This leads into what is arguably the episode’s most hilarious and novel scene, where Dina appears to angrily call everyone into an emergency work meeting, so she can berate and shame Jonah for his actions. Jonah soon becomes terrified, and another employee even raises a legitimate self-loathing cycle by having uncomfortable sex with the store’s creepiest associate, which Dina amusingly brushes off in impatience. The joke of this scene’s ultimate twist ends up being better, when Dina tries to convince Jonah that he’s been sexually assaulted, even when he stresses that this isn’t true, and Dina forces the room to give Jonah a round of applause for surviving his, “Trauma.” Honestly, it was a pretty funny sequence, and the funniest that Superstore has been so far.

Dina’s hatred of reporters felt like another joke that was sort of half-baked, with the excuse given that a high school paper once falsely accused her of having scoliosis, but there doesn’t seem to be any precedent for that, especially since Dina is a very well-built woman. Her own feeble attempts to get Jonah’s attention are getting better though, and could be a decent running gag for Season One, especially since Dina feels like she could be one of the show’s best characters in the long run, if for no other reason than the great amount of comedic energy that Lauren Ash channels into the part.

Superstore still has plenty of room to improve, but its second episode manages to be funny enough, even if it still doesn’t rise above being merely decent. Some of the issues from the pilot linger, such as a few stale jokes, and characters that need more development time to truly make an impact in many scenes, but “Magazine Profile” is a small tiptoe in the right direction. If nothing else, that sexual harassment meeting scene is pretty funny.

Superstore 1.2: "Magazine Profile" Review
Superstore's second episode seems to maintain the exact strengths and weaknesses as the pilot for the most part, but at least benefits from a greater sense of focus, as well as a couple of especially funny scenes with Garrett, Jonah and Dina.
THE GOOD STUFF
THE NOT-SO-GOOD STUFF
2015-12-08
75%Overall Score
Reader Rating: (1 Vote)
99%